Moult is one of the pieces in The Beginning of History. Bit of chaos and calamity around getting it ready for the show – as I couldn’t afford professional services I had ordered a made-to-measure frame on-line which arrived on Friday with a flaw so a new one had to be made and sent which arrived on Monday with the plexi-glass shattered and the wood scratched by shards so a new one had to be made and sent which arrived Tuesday just before 6 pm, this time in good order, but my arms were leaden with fatigue, and useless. Got up early the next morning and proceeded to cut to size the cardboard onto which I’d sewn the piece – hadn’t dared do it before in case there were discrepancies with the frame’s measurements… The first cut is the deepest took on new meaning as I cut one side with my scalpel knife, lay down for a while, made the second cut, lay down, next cut – you get my drift. It took me close to three hours to get everything done and ready for pick-up, most of it spent resting up for the next trifling step, without ever fully lifting the frame off the floor. Infuriating and ridiculous and the only way as help, which would have been available over the weekend, wasn’t now. Then my lovely friend M. came and carried and we had a chuckle about my challenged uprightness – as I waved her goodbye I stood as if I wanted to illustrate a 90 degrees angle. Put me in a text-book, please!

Big sigh of relief when I heard my work had arrived safely at the gallery. Ended up lying on my cutting mat which took pride of place at the centre of the living room where I normally reside. I say: better than on a bed of sewing pins after you’ve upended the container which brought visions veering between the soft ground in a pine forest (oh, the scent) and a fakir’s nail bed. My arms were like tree-trunks, seemingly heavier than the rest of ‘me’ and for a day or two felt as if they were fusing with the carpet floor.

Well, the only thing that matters is that Moult is in the show with my other pieces, and on Sunday, all being well, I’ll be there too. It’s been hard not to do the install (and the banter and discussion and buzz) with Nick Kaplone and the other artists, tantalising really, but I’d written instructions re: presentation of each piece and just had to trust that it would be done well. Had the frame-saga not been a saga I’d have finished prep at the weekend, as planned, and might have been able to pop in… Anyway, had a sweet sneak preview from the photos Nick mailed – it’s going to be good, really really good!

When not pinned or sewed to a surface, and stretched like a flayed skin, Moult curls up, becomes formless – something about the tension in the stitches crocheted from strands of hair. Flatness has been a conscious feature in all of my crochet work, and here it’s amplified, through a folding back of the bodice’s front, a flipping open, for display.

The German translation for bodice is Leibchen. Leib is an archaic term for body, chen a diminutive when attached to another word. Leibchen – literally little body. This word was actually my starting point, I love it’s meaning and look and sound. It refers to a child’s garment, and as I write I realise it’s a garment that has literally fallen away, is not in use anymore – after the war that extra layer between undershirt and shirt/blouse disappeared. It is also close to the word Liebchen, little darling.

I think I’ve produced a heirloom of a kind, an outfit that might have been tenderly made/kept/stored away/handed down/maybe forgotten in a chest or drawer or box (something which I’ve longed for lately). You will have seen my Perfect Maidens – early hair-work, fairy-tale work, with feminist leanings, with which this piece does connect, but in this context (The Beginning of History) there is a clearer awareness that hair, even if artificial, and esp. blond hair, brings with it certain connotations – Aryan ideals, Auschwitz… A self is relational – whichever way I turn, this is something I’ll come up against, with. 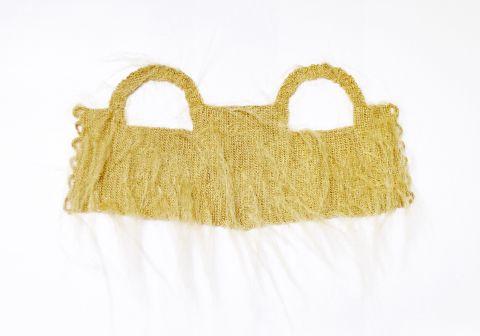