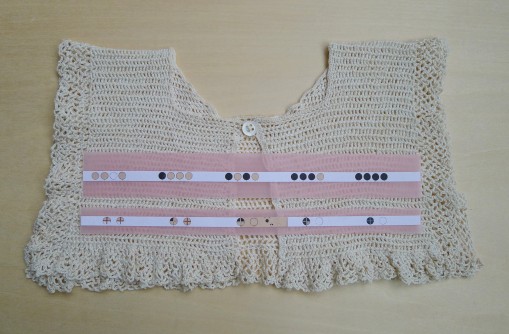 A couple of weeks ago I bought a second-hand crochet piece on-line, half bib, half collar. I wanted to add it to my small collection of outfits&objects that help me explore, call into, fall into, the time my dad was a child. While I declare some of these acquisitions stand-in heirlooms I remain unsure how much I’m following sentimental impulses, and how much this is a valid approach. I’m thinking a bit of both, incl. a half-knowing, half-wistful indulgence which is immediately checked, but there all the same. In the end it depends on what I do with these objects, how I place and contextualise them.

I like the collar’s simple shape, that it’s delicately made, and sparsely embellished with its ruffled edge. It is still almost too precious (I don’t see its wearer romping and roving outside, getting dirty), and may well say something about (middle) class aspirations. I tend to lay my acquisitions out next to me on the floor (after three days in the freezer – moth-worries…), look for relationships and interplay with other objects I’ve got around me. When I came across strips cut from a piece of pink half-transparent paper I knew what I wanted to do: infuse it with (learned) memories of a cross-roads point in German history.

I’ve long been staring at a chart used to explain the Nuremberg Laws of 1935 (my mom wasn’t yet two years old), which enshrined the Nazis’ racial politics in law and made the accident of birth, and categories of ‘pure blood’ and ‘mixed blood’, the major determinants of a person’s life. Anyone with three or four Jewish grandparents, no matter if they practiced Judaism, or had converted to Christianity, was defined as Jewish. Citizenship and civil rights were defined along bloodlines. Between 1933 and 1945 2.000 anti-Jewish decrees were passed.

With some disquiet I photoshopped elements of said chart to make paper bands which I’ve placed on the collar (once folded). Too simple almost, and still troubling. I seem to be averse to committing myself, assemble objects, fragments of photographs and such like, but don’t fix, glue or sew on, as if I needed to be ever ready for new configurations/combinations.

When my dad was in secondary school the Law Against the Overcrowding of German Schools and Universities (1933) was passed, which limited the number of Jewish children to 1.5 % per school (they made up 5 % of school-aged children). 1942 all schools were closed to Jewish children. What was taught at school was defined by the Nazis too. Love for and obedience to Hitler was drummed into children from an early age. History was about the greatness of the so-called master-race, geography about the need for expansion of territory, the domination of ‘racially inferior’ (I find it almost impossible to enunciate these toxic terms) people, etc etc. ‘Racial hygiene’ and purity were central. Any subject was co-opted – imagine learning the rule of three through arithmetic problems where the costs of caring for x disabled persons are set against the needs of y ‘hereditarily healthy’ families, or where pupils calculate the amount of fuel needed for x airplanes to throw this or that amount of bombs on ‘the enemy’. Children were prepared for war in all kinds of ways in and outside of school – we all know about the Hitler Youth for 14-18 year olds; 10-14 year olds were expected to join the Jungvolk (Young Folk), and there were even groups for younger boys, the Pimpfe, and military exercises and fascist indoctrination were part of them all.

I was struggling with the thicket of notes for this post when I found that Michael Rosen‘s The Benjamin Broadcasts (see post 28 May 2014) was on the radio again. Finally I could breathe! Here’s a point in time I don’t want to move away from, when such intelligent, thoughtful and politically astute broadcasts for children were commissioned. Walter Benjamin took his young listeners seriously, expected them to be curious about the world, think and engage critically. The opposite of what happened under the Nazis, when everything became about discipline, obedience, limited mindsets, the creation of soldiers.

Since I’ve begun my project I’ve peered at so many photographs of my dad and marvelled at the multitude of faces I’ve become acquainted with – of a baby, toddler, child, youth, soldier, PoW, adult, professional, for forty odd years my father, and last, indelibly burnt into memory, his dying, then dead face, strange, familiar, stony – of which no image exists but in my mind. I’ve lately come to feel a kind of wary gratitude to him, for having gifted? charged? challenged? me with the weight and compass of this project. It gives my stationary&supine life purpose and meaning beyond myself, keeps me engaged and learning without bodily stepping into the world. Last week I lost two whole days to overwhelming pain and fatigue, and during the rest made small stretches of half-intact time count over and over. I rail against the tiredness, my body’s and mind’s constraints, which extend into every part of my life, but wonder if the leaden pace fatigue dictates doesn’t serve me well in this case – my stop and go-processes offering a kind of protection, giving time to process (by which I may well mean forget), to pick myself up, to dare the next sideways glance.

I’ve started a little twitter adventure, trying to post a pic of an ‪#‎artling a day @marjojo2004. Found a bit of text I wrote years ago, which I’m afraid still applies: “I spend most of my days here on my floor-bed as I don’t like lying in bed during day-time if I can help it. The mess of having everything around me can drive me crazy. But art-making is my life-spark. At its worst, the illness is a blunting instrument. During these times I hang on to a positive sense of life literally by a thread. I need to have even the tiniest thing on the go: one squiggly line describing a knee on the back of a bill, a thin strand of hair threaded through the eye of a needle, a small dress cut from an autumn leaf, its curly stalk making it dance… Or I defer and write a note, put to paper the flash of an idea, which I might or might not take up when I feel a bit more energy.”