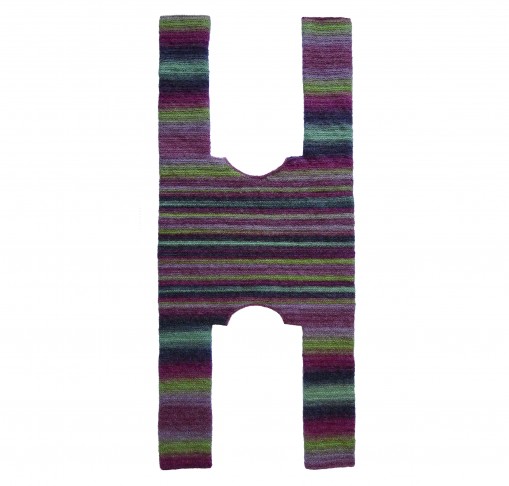 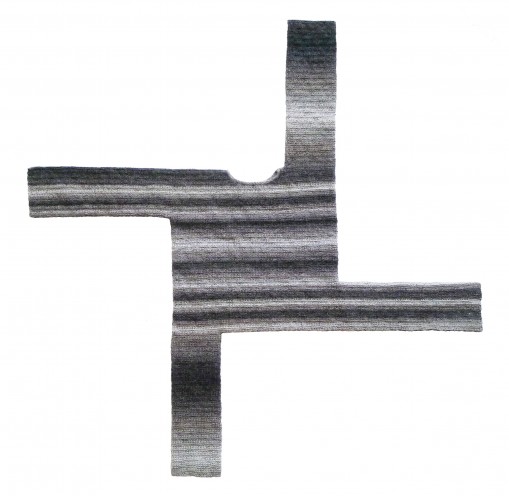 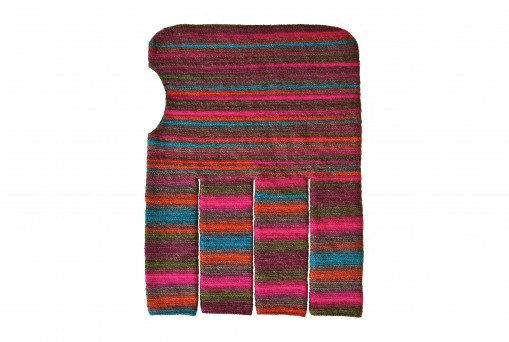 I should know better by now. Every time I finish a post I feel sure about the next one, which will follow on directly and be faster&easier to write. Ha! And every time I find I bob in dark, cold waters where questions and qualifiers swell the waves, urgent and unanswerable. This week’s selection of one tiny inky drop to peer at under my personal microscope, a wee globule hanging from a trembling fingertip, came about through an expected yet timely find.

I was looking for something else (still am) when I happened upon three colour-photos (all but forgotten) of me sitting cross-legged on a cement floor in a narrow whitewashed space at art-college, sixteen, seventeen years ago, facing a small television (as deep as it as wide), also placed on the floor. I am watching the looped b/w footage of the girl from Triumph of the Will (see earlier posts), those 1.5 seconds which I keep returning too, doing her whatever it is over and over again. I’m alone in the room, have my back to the camera which is on timer and my right arm is half-raised.

Yes. Half-raised and going up. I am imitating the girl’s approximation of the Hitler Salute, and by extension the gesture itself. I have become obsessed, have furtively tried out the salute at home, felt stretch&strain in shoulder and arm, and how it might momentarily make you feel tall&strong&towering. I have done this just a couple of times, with breath held, and thereafter felt suspicious of each&every gesture for which I have to extend my right arm – waves now contain perilous seeds and have to be modified; the hand that slips&stretches through a sleeve or reaches for a book on a high shelf suddenly pulls sinister memories in its wake.

At the time I analysed those 1.5 sec frame by frame and saw what otherwise flashes by: When the girl’s hand is highest her gesture comes closest to looking like a Hitlergruss. All the intermediate stages could have different meanings: waving, pointing, framing… The imperfection of her gesture and the grumpy face with which it was delivered were almost startling in the mass of rapturous miens, of movements and marching executed with military precision. But I also saw a tension in what I was doing (as I do now, taking my dad as an entry-point into German history): while I used the focus on the girl’s gesture to pry something open in the fascist discourse Riefenstahl’s film presents, I held her, froze her in that gesture, that context.

I worked a lot with that film, engaging not so much with speeches and marches, but exploring the faces and gazes of those looking on, the population (‘ordinary’ men and women) lining the streets and hanging out of windows (there are more photos to find, somewhere), and in the course and without noticing drowned a bit. When my turn came for a presentation of work in front of class it didn’t go well. A few minutes in I was crying and crying and couldn’t stop.

Since then I’ve regularly returned and revisited, often in oblique ways, and now explicitly. I think something is different this time around; it has become a somewhat healthier pursuit. I write, reflect and process here, at my own slow and deliberate pace; try to gauge how much I can take in and hold at any one time, allow for breaks and withdrawals, although with varying degrees of patience with myself. I’ve managed to link up with a handful of people for conversations&exchanges full of compassion (you know who you are!). And – this too seems vital – my work and processes have become embodied; I use my hands to work through and out. Whereas before I looked and looked and mostly produced photographs and video-pieces (which can be a highly cerebral medium) I now touch pierce pull stitch cut fold sort sew play lay out crochet assemble undo untangle brush nudge grope stroke scratch. It mends something in me.

I also watched Imagine this week, about Anselm Kiefer, whose work in scale, vision and approach could not be more different from mine and whose exhibition at the Royal Academy I could not get to, alas, though I’ve been to others. We seem to be operating at opposite ends in ways which comply with clichés about male and female artists, masters and mistresses. There’s something about the scope&ambition of his vision and the space he so confidently takes that induces vertigo in me, fascinates and exasperates (all tinged with a good dose of defensiveness and envy I’m afraid – for assistants, funds, energy, working and storage spaces, materials, and he can stand too!). I have reservations about the appropriation of the Nazis’ megalomania – disquieting and effective, as well as the fact that Kiefer’s work inspires awe. But then I’ve got reservations about the work I produce, so directly personal, intimate, small-scale, diminutive even. I’m all boldness-in-waiting. And yet (I fall from but to but here) what I find most interesting at the moment and really enjoy is laying out little things next to me on the floor (see #artlings), not gluing, not sewing together, just layering, photographing, posting and disassembling. Where Kiefer reaches for eternity I seem to slip more&more into what fits a thousandfold into the blink of an eye.

In the end both are valid approaches. The most important thing we share, beyond subject matter, is the starting point – our respective fathers. After all Kiefer wore his dad’s Wehrmacht-coat when he placed himself at historical sites and performed the Hitler Salute. There’s a kind of intimacy in that too. And by the end of the programme I’d warmed to him and his vision more. I was bowled over by how he chooses to inhabit his working spaces, allowing parts to speak and breathe without interference, and transforming others completely. But as ever I zoomed in on small details. When one of his early interviewers remarked (1970?) that Germany wasn’t ready for his work at the time he said: “But I wasn’t ready too.” That resonates with me. I’m still not ready for what I’m trying to do, and yet deeply&irrevocably embroiled. And when people wondered at the time if he was a neonazi he did not answer, explaining that through his work he went back to an earlier time when he might not have known what he was. Very simply. I connected.

I dug up (on my computer) a few older pieces. You’ve seen one as I am a stick, I am a stone before.

Seasons of the Fall (2011-13)
Crocheted from wool/polyester mixture
Dimensions: to follow

And below my last #artling. 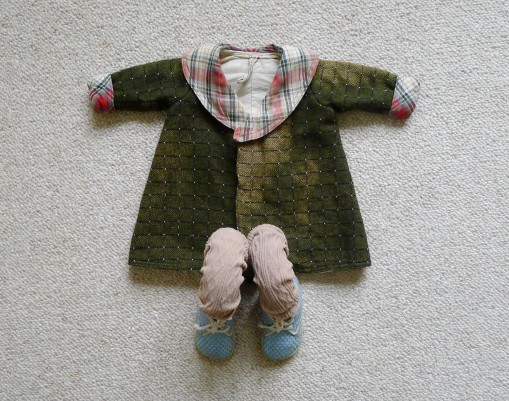