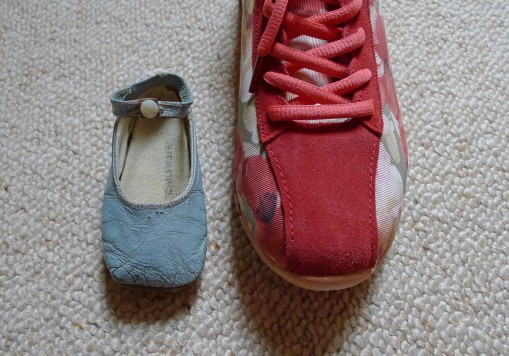 Today is the day! My solo-show at R-Space Gallery in Lisburn is open and I will give the talk I’ve written via Skype, at 3 pm.

For all those who would have loved to be there (thank you for all your good wishes!) I publish the text below, as well as the audio-recording I made yesterday. 14 min 46 seconds!

Crossing fingers that all will go well this afternoon. I might even get a glimpse of the exhibition. Thank you to all at R-Space Gallery who will have taken great care installing my work. Today is the day! Best foot forward.

GREETINGS FROM THE IN-BETWEEN

Strands of wishful thinking… If only I could say, at this moment: I’m here, with you, this afternoon, share space, art, thoughts and questions with you, directly, face to face. Instead I say: I wanted to be there, with you, ponder pleasures, perks and pains of art-making with you, in the same room. How glad I am though to be able to connect after all, this way. So hallo to you, good afternoon, and thanks for coming.

You have the advantage of me today, experience my work in a new space. Art comes alive when it’s out in the world, forms relationships with its surroundings, kindles conversations, and I wonder if and how I would find it changed.

You already know that I make most of my work lying down. This is not a story about triumph against adversity though. I am a visual artist, and making will out. Over the years I’ve learned to adapt my practice to my physical circumstances, and constantly, daily really, negotiate this as best I can. The question is: How do competence and supinity go together? In my own mind, and in the reception and regard of the world around me and beyond me…

I came to crochet almost accidentally, decades after I was taught at primary school and considered it a chore. An idea beckoned, of a small pair of girl’s legs in full stride. A memory of knee-socks made me try crochet. I found I could do it lying down, and even on my worst days manage a few stitches. Compared to my previous medium – I used to make video-installations – it seemed a trifling outdated, but then I practically fell through time and liked where I landed… Crochet lends itself to framing childhood memory in a very direct, tangible way. Its quaintness in look and process, its sensory qualities, link directly to a lived (and imagined) past. There’s something in the tension between tight thread, crochet-hook and the interplay of hands and fingers that allows me to produce (slowly, slowly) when I can’t hold a pencil to draw or a brush to paint.

I wonder about the space between the intangibility of the video-image and the materiality of my crochet-outfits. My work seems to have slipped deeper into the body. And – this too seems vital – art and processes have become embodied: I use my hands to work through and out. Whereas before, working on my video-pieces, I looked and looked and looked again, I now touch pierce pull stitch cut fold sort sew play lay out crochet assemble untangle brush stroke scratch. It mends something in me.

Over the years I’ve inched myself towards a clearer conception of myself as an artist who makes work on the art/craft-threshold and cherishes just that in-between space, which does not mean that my work isn’t often easily vexingly lazily labelled and down-graded by others.

R-Space Gallery at The Linen Rooms of course is a place that successfully straddles this divide and I am delighted to have my solo-show here. Thank you for inviting me.

As I do not leave the house much and my ability to make new experiences in the world is restricted I’ve made memory my draw-well.

Hair is the stuff of myths and fairytales, norms and notions, pleasure and anxiety, all of which seep into daily experience. As a material it evokes bodily things, instinct, desire. Women’s hair, esp. body hair, is fraught with cultural associations which veer almost violently between idealization and degradation.

I use the artificial variety, which comes in sumptuous, loosely woven plaits. Dividing them into thin strands for a crochet-piece brings coils and kinks and tangles. Obsessive traits and fiddly fingers are of advantage here.

I come from a generation when Sunday best was of the essence, whistling counted as a transgression, and wildness&abandon were never more than a phantasy for a little girl, if that. I feel no nostalgia for that time. Fairy tales, with their dark forests and reversible fates offered a different vista, where tall stories and small stories conjoined.

Thinking back it seems to me that Grimm’s tales and a bit later my youth-edition of Greek myths were my earliest source of knowledge about the wider world, about poverty and hunger, the sacrifice of children, the effect of war’s brutal extremities on women. I am not sure how much I really understood what I read, but I keep returning to these stories as an adult, as an artist, and find they have left their mark. And then there is Auschwitz…, but I didn’t think of that until much later.

I am fascinated by the imperfect. My concern is with difference and otherness and how it might be experienced, but also with the feeling of being different manifested in a physical way. You could say I’m trying for a kind of calibration of how cultural pressures, expectations, roles exert influence, distort, deform …

My work’s scale may be small, but I hope you find it charged. Textures and shapes develop under fingertips and speak in tongues: densely crocheted or like a spun web, pulled and stretched and tightly sculpted or in free-float. Diverse aspects coexist: the pretty and the disconcerting, the domesticated and the wild, innocence and excess. There’s humour too, I think.

Some years ago, through a flea-market find, I found myself falling deeper into memory, beyond direct experience. We live with the fictions as much as the realities of memory passed down generations. For me, born and raised in Germany, inherited memory is inextricably tied up with the stunning weight of fascism/the holocaust. I started casting sideways glances at history. The concern with difference and otherness took on a new urgency.

My series Riefenstahl’s children was crocheted from old, left-over wools which had been gifted to me by the mother of a German friend, an avid knitter who was losing her sight.

Inspired by the glimpse of a two-year-old in Leni Riefenstahl’s film ‘Triumph of the Will’, who raises her arm in what in any other context would be read as a wave but here seems a crooked Hitler salute, I imagined a generation whose right arms had undergone a kind of devolution. My little crocheted dress almost as should be, at first glance at least, and with each new outfit a progressive severing, resulting in outlines that almost, but never quite, approach abstraction. It takes a moment for the work to become unsettling and something arises from the absurd, the strange physicalities evoked. What kind of bodies could inhabit these outfits? Does the body demand these shapes or the other way around? All this is set in tension with the softness, tactility and quaintness of crochet.

Two winters ago I embarked on a father/daughter/history project. It’s not a focus in this exhibition, but bobs up in places. My dad, who was 19 at the end of the WWII, was severely affected by his experiences as a Wehrmacht soldier. I use his figure as an entry-point into German history. In a way it is a compulsion I’ve inherited from him, a constant worrying of wounds.

I mention this because it’s changed how I work. This way of pulling history close brought a widening of scope and media. My visual language expanded. For years I produced discrete pieces, carefully, painstakingly crafted, often over months. Now contingency is important, and meaning lies as much in the processes which at times are almost performative, as in the end-result.

I work with copies of images of my dad as a soldier and PoW from his old photo-album. They lack the originals’ precision, the aura of authenticity, abound in grey-tones. I felt a strong need to add tactile and material elements, tangibility really, and stitched into them with a fine mohair/silk yarn, setting its soft&fuzzy qualities against the image’s consummately masculine context, an act both protective&piercing, delicate&damaging. I imagined breath underneath these woollen shields, and often found I held mine.

Heirlooms interest me in this context. I haven’t got many, consequently mine are produced and acquired. I use children’s clothes from the 1930s to call into the past, then strain my ears to see if anything comes back. They help me weave (concrete) history. It’s a bit as if I was darning all those hole-ridden/loosely woven family stories with threads pulled from my acquisitions. Questions of authenticity, of fiction and truth arise, which I refrain from answering conclusively.

Last but not least: my artlings

Lately I’ve started to lay things out around me, small assemblages, which I photographed and tweeted, then disassembled again. A first foray into instant on-line art-communication…

Many of these artlings don’t exist in real terms, only as documentation of moments in time. Nothing is fixed or glued, each piece a kind of transitory collage of disparate elements, a sketch really, a gesture, or playful salute, featuring old things and new things, borrowed and blue things, made, acquired, refashioned things – assembled and reassembled, always in motion. It is a good way for me to follow a less worked-through, visual train of thought. I can be freer, bolder, and, also important: work faster.

There are several versions of the series, which steadily expands – on twitter, as a book, as photographs. And a selection of the real thing is with you at the gallery. Each individual artling tells a little story; between them narratives shift and change. My old themes are present here, new ones appear. I hide things in these constructions, tiny references, and wonder if for the viewer too my contexts resurface in unexpected ways.

So this is some of the work I make at home. I live in doubt’s belly, have reservations about the art I make, so directly personal, intimate, small-scale. Some of it is deceptively simple. All unspectacular. Quite minimal, but in the end full of energy, I hope, and emotionally, mentally, aesthetically charged.

I have learned to use those times when my limbs aren’t lead-heavy or limp like celery sticks. Something in me springs into focus when I find any energy at all. You could say I work at a very measured pace! Those slow, stretched out processes of mine impress on me how in so many ways I live in the frayed folds of pastpresentfuture, with just instances of unfurling and peeking out into the world. Like right this moment. Thank you!
____________________________________________________

Marion Michell
Strands of wishful thinking: Hairlings and other things