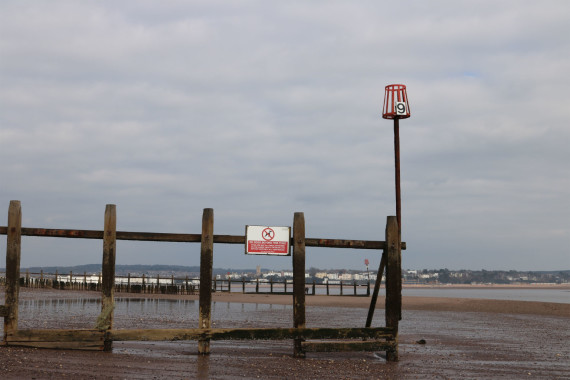 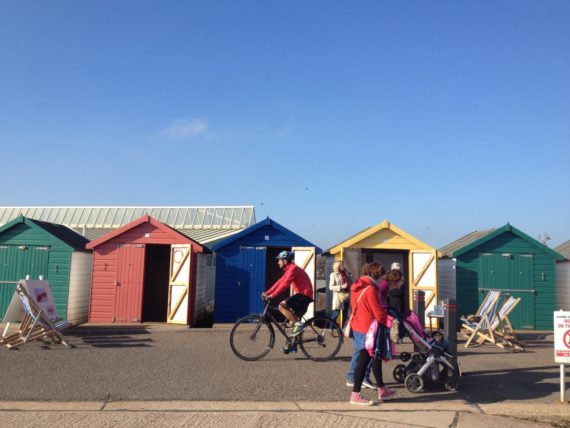 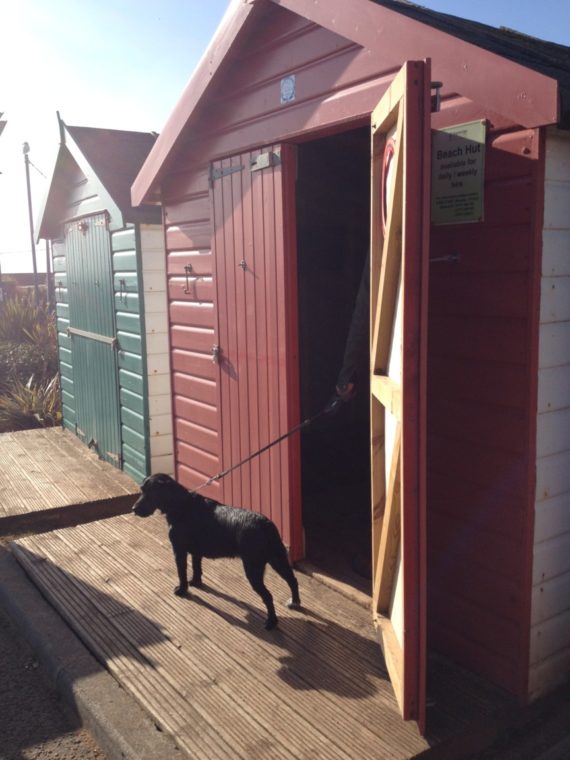 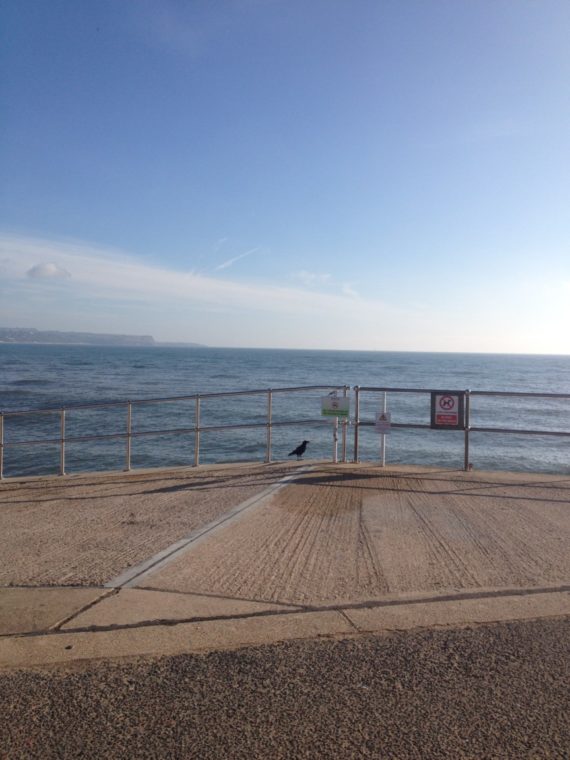 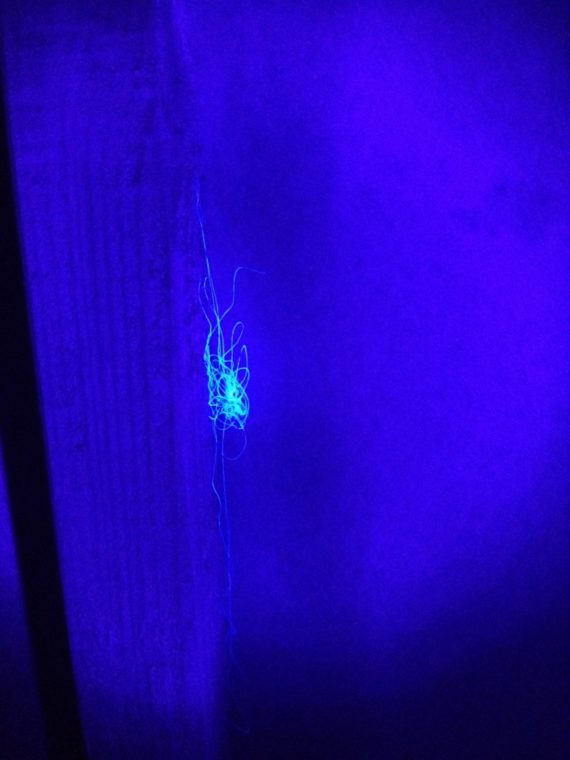 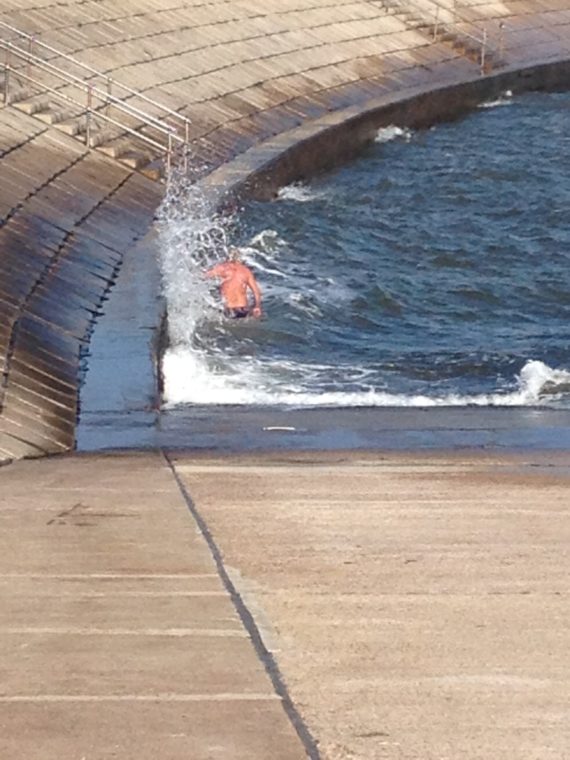 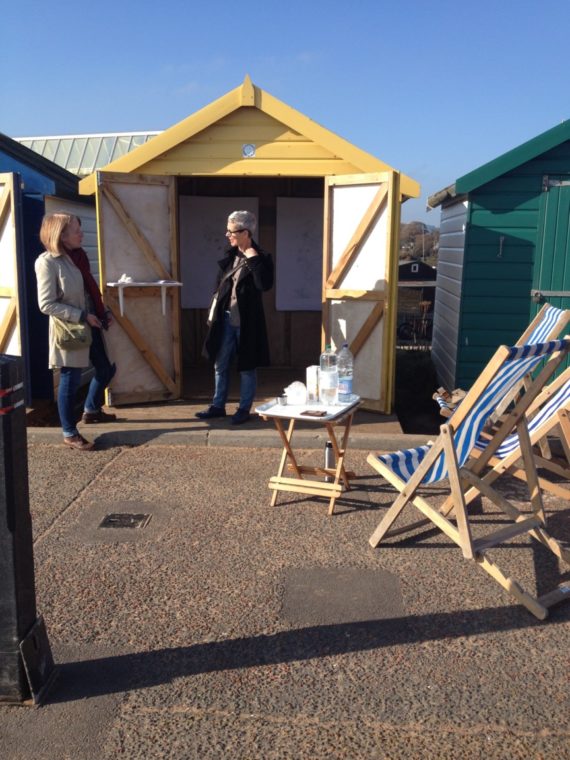 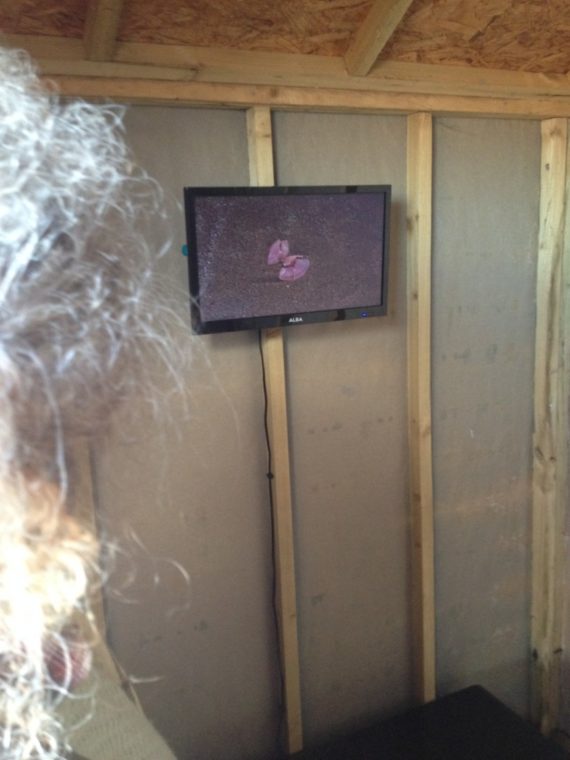 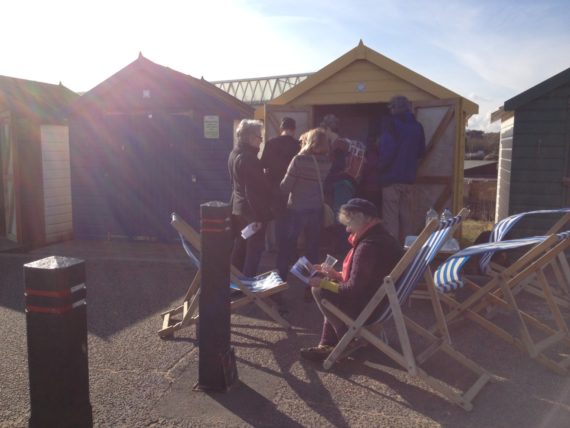 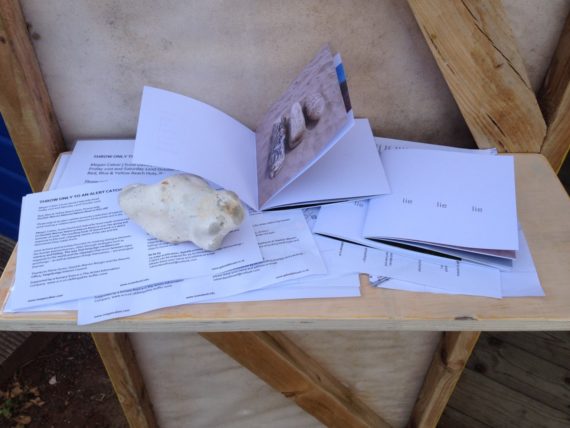 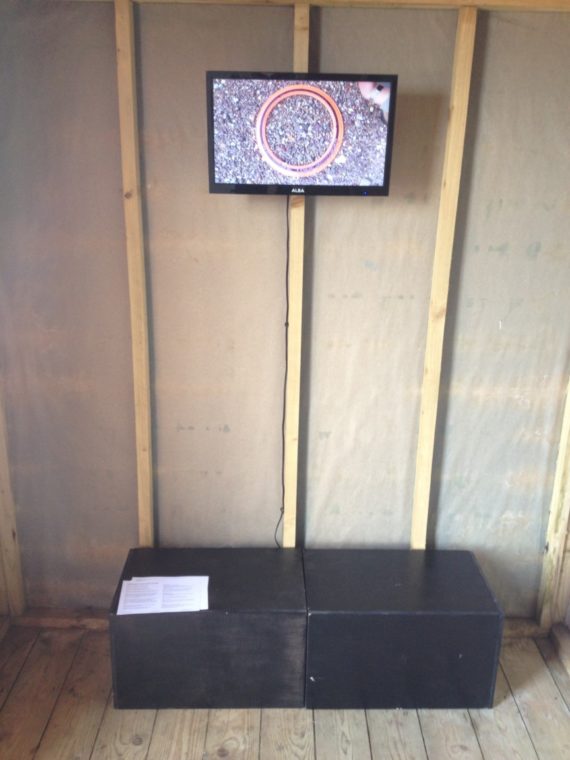 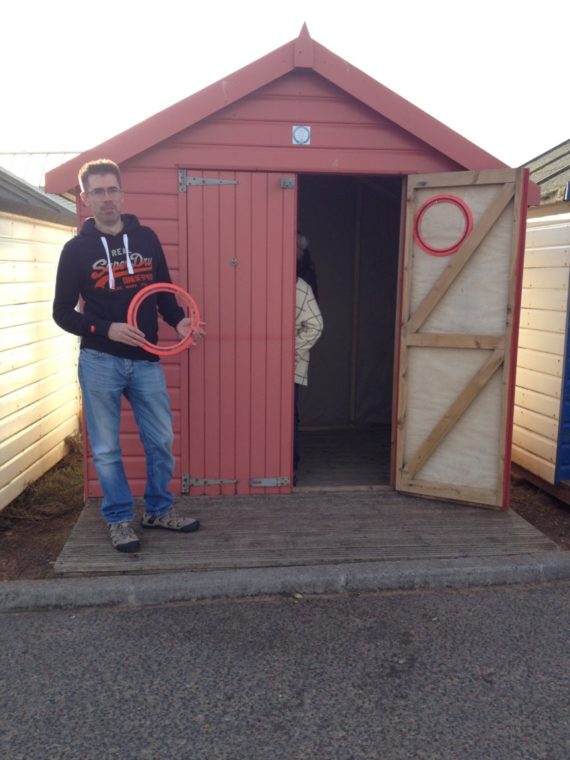 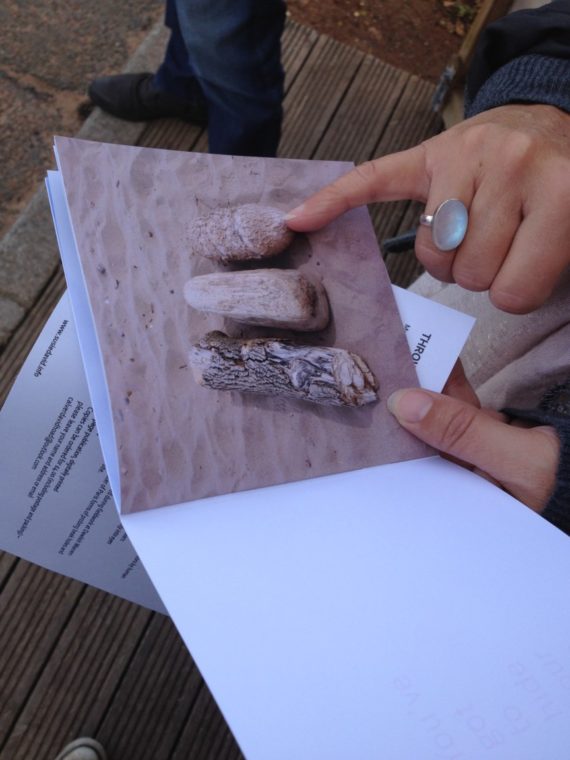 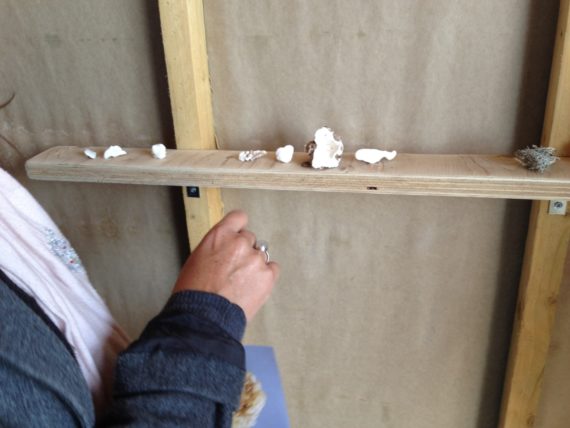 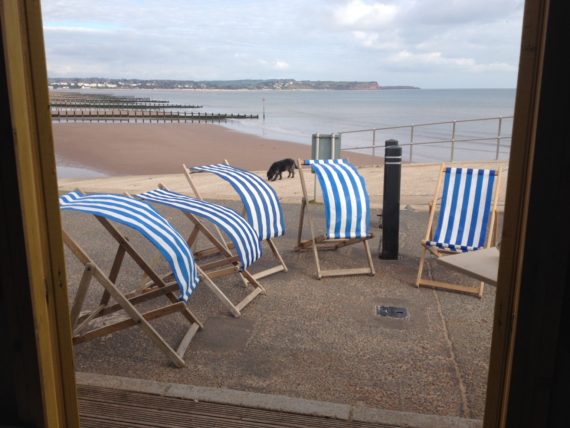 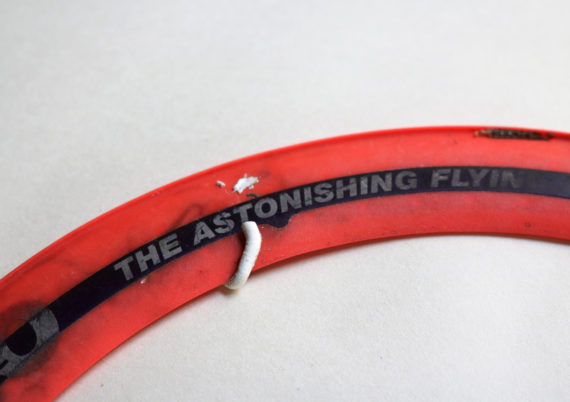 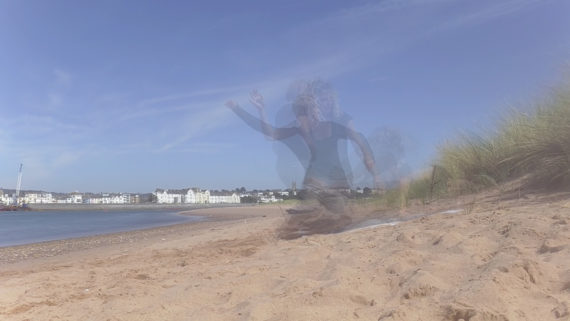 Here we are at high tide, high summer on Dawlish Warren. One side of the spit is opaque jade sea, boisterous with high waves and high winds looking mischievous …dangerous even.  A few people standing on the edge of the slipway consider jumping in. I hope they don’t. Concrete so hard. Bodies so soft. The other side of the spit is placid. Split …spit personality?!

We set up camp on the serene side — better for recording as we shout back at the loud tourist boat through the megaphone. They don’t hear, not even when the megaphone’s siren accidentally goes off. Flick of a switch. They do look at us though. Eventually someone waves.

The Warren shows off, spinning a large murmuration of dunlin over our heads, effortless. Silver-grey slight winged bodies shift in and out of visibility in the sunlight. Slipping out of gravity. Slight of hand. Slip of the eye. Slip of the tongue.

Who wants to do the slipping, err, the falling?

You fall — you’re the fool.

I am clowning around today — drunk with the high tide possibly, for a wistfulness seeps in the minute we see that the tide is on the turn.

The summer too, having been at stand is now on the turn. Falling back down to Earth.

Earth — our planet; substance of ground; drive (a fox) to its lair; connect an electrical device to the ground.

How to fall, fool?

A random search for ‘fool’ in Google reveals:-

The Fool is shown at the beginning of his journey with unlimited potential. The sun rising up behind him …facing north-west, the direction of the unknown. He is looking upwards, toward the sky, or Spirit. He is about to step off a cliff into the material world but is he prepared? He has all the tools and resources he needs in the bag on his staff but he has not opened the bag yet… (https://www.biddytarot.com/tarot-card-meanings/major-arcana/fool/)

Shape-shifter, mercury, trickster, hermes… There are many fools in us.

The trickster is a character in a story (god, goddess, spirit, man, woman, or anthropomorphisation), which exhibits a great degree of intellect or secret knowledge, and uses it to play tricks or otherwise disobey normal rules and conventional behaviour …using trickery and deceit as a defence. (https://en.wikipedia.org/wiki/Trickster)

But we all fool, fall — gravity is irresistible.

A mother comes up to ask what we’re up to then hastily ushers her daughter away as we clumsily try to explain why we are falling.

Megan’s head hurts and Gabby’s pre-existing bruises from a previous fool fall on the Moors become bruised. But, from down here if you look up, the sky opens up.

The alto cirrus and contrails up there mirror the marks of our falling down here. Is this is an environmental experiential Rorschach?  Or are we just projecting meaning?

Megan reminds me of a Donna Haraway quote that caught our eye early on in this residency, way before we fell for the Warren:

‘Perhaps our hopes…turn on re-visioning the world as coding trickster with whom we must learn to converse.’