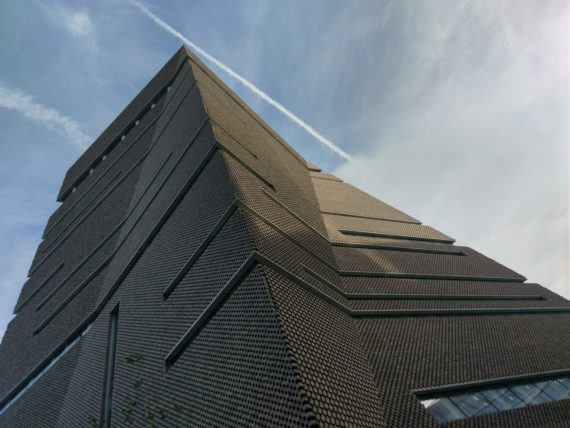 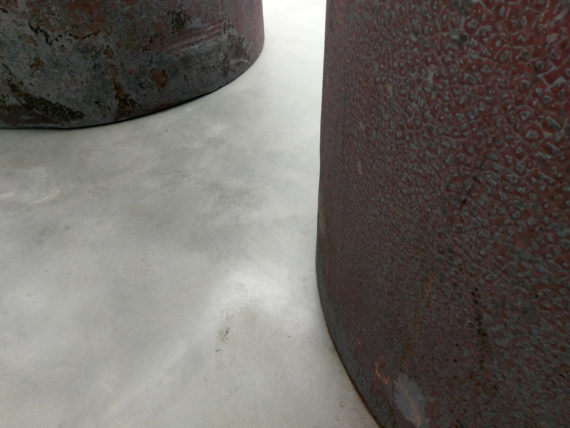 It’s official, Richard Serra is the most important and most influential artist of the 21st century, well that’s what I say! I could just be saying that I really like his work I suppose, yet if I strip away the subjective view I am left with the fact that the two current London shows of his work at the Gagosian galleries seem to be delighting and astonishing visitors. I’ve never seen either gallery so busy and never logged such strong responses from visitors around me. And back to the subjective, I never thought I would have such a strong emotional response to the 3 pieces at Britannia Street. NJ-2 is monumental: it elicits a similar response to entering a sacred space. I remember the feeling I had in first entering King’s College Chapel, Cambridge, a space engineered to make your spirit soar. It seems that Serra too has the skill to control the environment and to direct our physical and emotional response. Everyone seemed openly affected by it. A soberly-dressed man overtook me inside and, grinning like a child, said “great isn’t it!” Another man, shaking his head, said to his partner, “absolutely mind-blowing!” The party of young people charged through it noisily (the sound boomed and thundered magnificently through the piece) but then seemed stilled to awe, some open-mouthed staring back at it, once the ceremony of passage was over. A woman just stood quiet and studied the surface of “Rounds: equal weight unequal measure” close up for some time then took a photograph, moved slightly and studied close up again.  “Rotate” seemed to cause a sense of community people smiled at each other, chatted slightly shyly to strangers, asked questions of the security man. And me? I thought I needed to create a new term of praise above “bastard!” – this work is more than “clever bastard” stuff!  Perhaps any art that I encounter from now on that is deserving of the very highest praise would be dubbed “Serra-quality”! 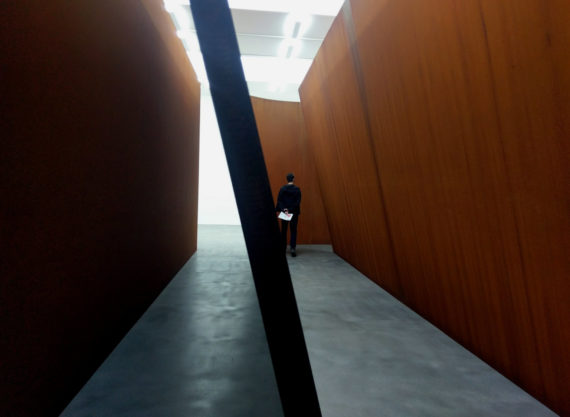 Serra has the ability to talk to us on multiple levels at the same time and cannot imagine that anyone who spends a little time with these large works would fail to be touched in some way by them, be it emotionally, spiritually or intellectually. He is a very clever artist: teasing the mind; tricking the eye; seducing our senses; controlling the way we interact with space. The more time you spend with the work the more it repays you. The forms are big yet relate to human scale and shape. My eye is at the exact level of the higher of the two blocks of “Rotate” which makes it easy to read as a 2D shape. The lower cylinder of “Rounds:…” a few inches lower, presents me with a similar visual possibility, creating optical illusions unexpected in such massive forms. I loved everything about these three pieces, beautifully understated and precise: nothing flashy or arrogant, just sincere and authentic. 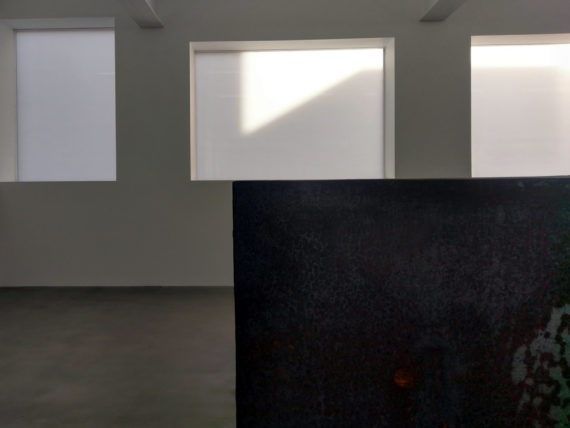 I could understand if people found the Serra drawings at Davies Street less easy to penetrate and draw pleasure from. Thick layers of various black stuff on bits of paper – we could all do that! But I fear we could not. Again time spent reaps rewards! They were not amongst the finest Serra drawings I have seen – though who am I to judge? Better to say there are other Serra drawings I like more, but I could happily live with any of these and explore their rich treasures for a very long time.

This week I had a day in London to catch Georgia O’Keefe, Wifredo Lam and Bhupen Khakhar as well as my first look at the Switch House, if I had the energy, all at Tate Modern.

Having said that’s all I would try to do, I couldn’t resist popping in to the Bankside Gallery to check out the Autumn show! Sorry to say there was little there to impress me. There was a lot of thoroughly well-produced, artistically-proficient, nice work but hardly anything got my heart racing or my blood boiling. Even some members whose work I respect haven’t put their best work in this show. Claire Parrish’s conté and graphite wash drawing about London Bridge Station redevelopment was the closest to getting me excited, though I have seen her work before and, to my mind, this is not as good add some. I have now reviewed my thoughts on the other two people I was going to mention but this is the RWS in London so I can’t bring myself to puff up work for being slightly more interesting than average! Frankly, the work I had in mind had interesting ideas, but was not brilliantly presented and in one case poorly framed. I think we do as well, sometimes better, out in the provinces!

First call at Tate Modern was to check out the new members’ room. It’s in the Switch House and waiting for the “express lift” (which actually stopped at every floor!) I was surprised how little of the new £260m building actually houses and displays art! I’m caused to wonder how much benefit could be purchased for the art-loving public if spent in other regions of the UK! Anyway, the members’ room experience was not a good one. It’s like a cheap canteen in atmosphere and nobody thought through how it might work. More than 18 minutes standing in a queue to not get a coffee how I requested and because it was gone 12 noon I couldn’t have a pastry (there were none when I arrived just before that time anyway!) The staff were surly and unhelpful. The counter layout not visitor friendly. No ice bucket, fresh water or lemon. This is a definite downgrade on what we had before, not the promised improvement. Other people I spoke to, or who spoke to me, agreed. It doesn’t feel special any more. I also didn’t see mobile and laptop charging points. Come on folks, it’s supposed to be a 21st Century building! 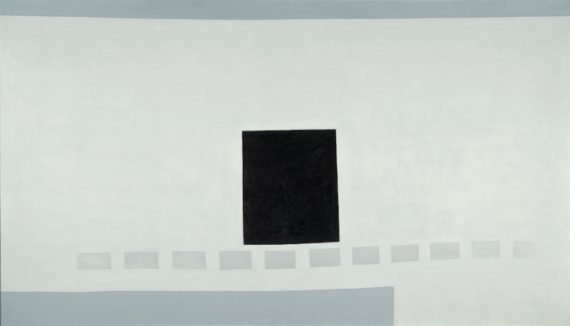 So that experience soured the start of my visit, but I was looking forward to the Georgia O’Keefe and didn’t even mind it was last-week and half-term busy. I really can’t say I’m familiar with her work – certainly not in the flesh and little in reproduction – but I have read a little about her and her story, and it’s a story I find interesting and attractive. It’s this feeling of the artist and her life that I get most strongly from her work. It does seem to be a part of her and you can sense her presence in it. Yet I have to say I didn’t warm to the work much at all! Her aesthetic is mostly a mismatch with mine and frankly a lot of it I really didn’t like. I draw a parallel with Country & Western music: often a great back story, people deserving respect for their work, influential in the wider music scene, but just not to my taste. All that doesn’t mean I didn’t enjoy my visit. Even if I had hated everything else, it was worth it to see “My Last Door”. This is of course the most minimal and abstract of her ldoors” which is probably why I loved it. It seems to be a pretty perfect painting to my thinking. And there were other delights, like the lovely charcoal drawing “Eagle Claw and Bean Necklace” which I found astonishing in its depth and ability to draw the eye ever deeper (though a very crowded show, not many people seemed drawn to it!). The other reason for enjoyment, and it is a big reason for enjoyment, is the eternal connection to Georgia O’Keefe’s presence and romance which you cannot fail to sense with pleasure even in pictures you don’t like. 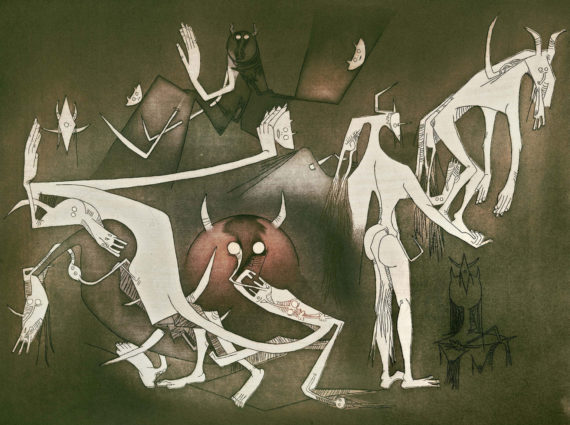 I was not sure how much I would like the Wifredo Lam show either. Again I was not too familiar with his work and what I had seen I’d probably filed away under “minor surrealist” or other unhelpful label! As I started round the show I confess, at first, I was uncertain but gradually I warmed to his line. At first approach I didn’t like the subject matter much, yet some of the symbols and strangeness settled in me. A couple of pieces reminded me just slightly of Edward Burra which gave me a way in. I started to see his aesthetic had resonances with mine. Then I came across his printmaking and was almost instantly inspired. I have said I’m a sucker for “annunciations” but Lam’s suite of etchings/acquatints of that title certainly didn’t have immediate visual connection with ones I’m used to, but I loved them immediately. His line and pattern excel and the acquatint is so free and wilful. This is work that I could live with. It is complex, involving and disturbing but offers so many routes of access mentally and emotional to both content and composition. The other print works were also a delight: some bold, some delicate, some ugly, some refined but always joyously interesting. I’m inspired by them and I’m encouraged to take some of my drawings down similar paths and perhaps to revisit etching again after so many years of saying it’s not for me! There are very few images available on the web of Lam’s work – especially the etchings and ceramics – and the exhibition catalogue is only useful as a reminder of the composition missing much of the power and subtlety. So I will be going back again while the show is at the Tate and recommend it to anyone.

If I show my ignorance and say I had not to my knowledge ever come across Bhupen Khakhar’s work before, I am not ashamed. After all where would a provincial lad like me discover his work? I enjoy discovering new work and I’m not afraid to try things I am unfamiliar with. Being a provincial Englishman I don’t have a clue where Khakhar fits into Indian, Western or world art – I tend not to research before I see visual art and concentrate on the work not the info labels – but I question if he deserves a substantial show at Tate Modern. It was quite colourful in every sense of the word and I enjoyed the humour and allusions to classical Indian art. It was clever and entertaining yet somehow failed to touch me. It didn’t seem to rise above the level of a soap opera even when aiming at bigger issues and deeper subject matter and the production values were similar to the old, visibly-flimsy-setted Crossroads! As a non painter I thought, “he is not a very good painter!” You could say who am I to judge? But Khakhar has things he seems to passionately want to say which he failed to communicate to me because the paintwork and drawing did not lend itself to carrying deeper or higher emotion.

And the Switch House? Well I only had time for a swift, partial tour but as I hint above it is a missed opportunity and has more to do with tourism, targets, eateries and massaging bigwig egos than displaying the Nation’s art collection and bringing to the widest public the opportunity of seeing great contemporary exhibitions. I am quite a fan of brutalist, modern architecture and in many ways I like the spaces this building has created: I am yet to be convinced it is the best purpose-built art gallery you could design for the site or the best use of money for the purpose I think it should be for.