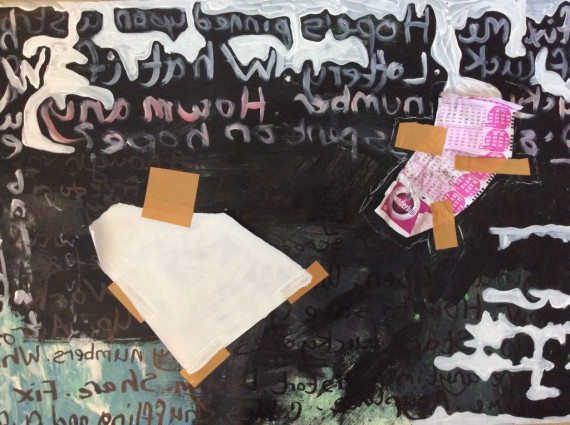 I have also made a short video of the pin prick writing projected a very short distance.

Bathe in Ignorance has progressed through words from a large English dictionary (a few pages) that I don’t know.  So far I’ve responded in paint to: abate, abatis, abature, abaxial, abay, Abaza, abb, abbacy, Abbe, and now abbess in light – pinpricks on black paper projected a short way onto wall with a torch shining through a tube.

Getting rather carried away with the possibilities of this and how it relates to the starting point with the phrase Bathe in Ignorance.  When I consider bathing the first substance I relate it to is water, but then through my responding openly to the words I have arrived at light.  For a while with this Ignorance piece I have worked with paint and gone with the flow, but today I have been considering changing the systems and techniques I have been using repeatedly (words and intuitive painting). I feel as if my painting is suitable for my first response, but that I can move my work on further by taking elements of the work to different extremes.  In Abaza I began painting dots, and then using large white dot stickers and then making further grey dots within cut up loo rolls as a guide.

The grey shaded dots of abbe were done using a cork dipped in acrylic in various shades of grey.  I’m currently editing a typewritten image of abatis and it’s definition on photoshop into two tones to print out onto layout paper to do a screen print at The Print Shed when I can next fit it in (working at a B&B most mornings next week).  The idea with doing this is putting the unknown words through several / many processes to see what, if anything, it does to the understanding of the text.

Abbess projected onto the wall leads me to consider a way to project words in installation form from the walls of a room towards the centre of the space (and therefore onto anyone or thing that is there). I have a strong feeling it won’t seem like that, but I need to try it really.  I’m considering projecting inwards rather than outwards primarily because if the light were dispersed outwards it would focus at all and it wouldn’t ‘bathe’ anything in the light.

Ruth Claxton is known for her large scale, site responsive installations and public sculptures which often use reflective and mirrored surfaces to create complex, interconnecting visual ‘worlds’. Referencing display systems and architecture and drawing on languages of art, craft and design, these works usually consist of a series of evolving components that coalesce for a moment in a particular space and then move on. The relationship between object and surface, and attempts to choreograph and orchestrate ‘looking’ are key to her practice, alongside a general interest in the digital mediation of contemporary life.

A foray through the last 10 years of her practice.

She hasn’t worked out how to unravel her practice – it’s a long process!  If she could unravel it she might not need to make the work?

Ruth’s father was a chemist in a nuclear power station while she was growing up and from early age there were computers in her home.  She started with programming, went on to study Fine Art at Nottingham Trent University in 1990-3. Developed tech skills and has a particular interest in the internet game Second Life where users are represented as avators.  2000-2 studied at the Royal College of Art.

Through Google and technology the ways in which we have at our fingertips to understand the world are huge and we have masses of information accessible in thin forms (as opposed to heavy volumes of dusty books, perhaps).

She was invited to make work by the Ikon gallery, Spike Island and Oriel Davies Gallery in which she wanted to reflect the area hosting her work.

In this exhibition she aims ‘to test our perceptual limits and illustrates the artist’s preoccupation with exploring different versions of reality, including virtual worlds.’  The welded struts and hoops holding glass and mirror circles, some with figurines, are reconfigured to suit each space.

Modified figurines designed for mass production sit on swirls of painted steel circles, among mirrors and coloured glass. Considering the position they have in peoples domestic lives. Lady’s in figurines are often nuns, are dancing or shepherdesses.  Men are often represented as soldiers or being in charge.  The figurines found in many homes.  Looking at giants causeway – modulated form. Interest in Joseph Beuys. ‘Work doesn’t come from theory, comes from mish mash’ I take to mean that her work grows from everything around her, things she stumbles upon, others which she seeks out and further still on her reflection of it all.  Claxton’s work arises from a rich seam found around her primary interests.

On a visit to Rome she was drawn to a particular part of Bernini’s sculpture where the natural world (carved in stone) turns into the building.

Ruth came across Lego augmented reality in a shop, if you hold the box up to the screen in the store you can view a completed lego aeroplane on top of the box showing what you could build with the parts within it.

What counts as a thing? Does this augmented reality count?

At the Ikon – her upright tube forms with circular mirrors at the back of the space which gave Claxton’s forms an infinite quality.  She’s playing with what you’re meant to look at.  Social media – all these different places available at once.   Like the internet, lots of layers, pretty figurine, reflection, details, a richness that is a reflection on the real world.

In her essay Offshore Worlds (http://www.ruthclaxton.info/files/offshoreworlds-sallyoreilly.pdf ), Sally O’Reilly says of Claxton’s work in the different venues: ‘so that the floor plans riff on a choreographic score for the eyes’ so beautifully puts into words the way the artist has placed her forms within each space.  Having only seen a smaller example of her work (at The Courtyard in Hereford) I have not had a feel for the sense of scale – just can’t get this through projected and online images.

Another quote from O’Reilly :  Claxton’s sculptures of adjustable landscapes with ‘stratifications of idealised and singular forms’ implies an ideal not of ‘flattening’ hierarchies, but the ‘fluid ability to constantly reconfigure them.’  Is insightful and reveals far more about Claxton’s work than any other words for me.  I know this isn’t her work in a nutshell, I wouldn’t want to try, the work she makes and where it comes from is a complex and this is just one element of her multi-faceted practice.

More recently Claxton has been working with Retro-reflective paint (see http://www.longbridgelightfestival.co.uk/RuthClaxton ) and worked with it on objects during her Cove Park residency in the summer of 2014.  Work with Retro-reflective paint later emerged in the ‘Lantern Parade’ for Longbridge Light Festival in October, made with pupils from Turves Green School.  The lanterns are activated by light – shine a torch at them or use the flash on your camera phone to make the lanterns light up.

I am fascinated by the route her practice has taken and the way reflection, the internet, scale and society come into play in her constructions.  Hearing her talk openly about all of this (you really had to be there to get the full gist – as usual we’re up against the limitations of the internet and a limit to words, images and time to convey something) has given me fresh insight into my own practice and only while revisiting her talk do I feel connected to the wider world of art again with a fresh look through Ruth Claxton’s approach.

Phrases: wood for the trees, bathe in ignorance, raging torrent, pull your socks up, man up, sheer weight of traffic, gulf between dream and reality…all phrases I am drawn to.

Bathe in ignorance – using the dictionary as a source of possible unknowns.  Why the dictionary? Because I focus on text. What about other things I am ignorant of – more. My word knowledge isn’t all that bad, what about something else that really shows me up? Something I think I should know about. How do I know what it is I don’t know? Politics, history…I reckon I’m not too hot on.  The dictionary is a good starting point in that each word tell a story – often words are to do with historical content, so if I don’t know the meaning of lots of historical things then this will show up. But also – as I don’t know what I don’t know, then it might be that words on other areas of knowledge come up more as I’m unfamiliar with them?

Selected page numbers to start with that are Fibonacci numbers – I needed to start with a limit to pages to photocopy and so this is one way of limiting the number of pages, and I didn’t want the words to all be starting with the letter ‘a’, for  example. Yes – I could have picked the pages randomly instead, but I am interested in keeping a bit of control in there.

Use these as starting points.

TOO CONTRIVED? Why exactly?
What’s the point of work flow without direction? (I keep coming back to thinking my work is completely unfocussed) Why does this worry me?  I’m simply worried, nothing more. Apprehensive about the unknown. My wanting to develop work from certain phrases as starting points isn’t directionless and I don’t know what might develop.  It would be a bit odd to make something that I know exactly how it will turn out before I start, that would be design, not art.

My fascination is with text, misunderstanding and message distortion so all of this fits with the possible way ahead above.

The PaperFields Hay team had the launch of our 2nd exhibition in the series last night to a good turn out.

The artists: Kate Morgan-Clare, Daisy Rickards (curator), Alex Weaver, Jack Clough, Rosie Daffern and myself all enjoyed an evening with a great atmosphere, made exquisite by the music of Penny White and Tim Welch among our art.  Tom Oliver from Olivers Cider and Perry (one of our generous sponsors) was there to meet all of us and find out more about our work.

We had some cider and perry left over, which we may use as fuel for an artist creative day / eve in the near future…!

Showing at the Globe at Hay until the 3rd of May – see http://www.globeathay.org/ for opening times.