Thanks so much to Rosalind Davis for the warm welcome in her recent blog postings. I am delighted to be a new member of Cor Blimey Arts. We’re already busy at work and it is such a pleasure working with an energetic group of like-minded people. I’m especially excited right now because I’m going to be in London at the end of November for the PV of Relay at Core Gallery, November 26, which means I get the chance to meet some of my blog friends!

Relay is going to be a really great show. Cor Blimey Artists are exploring their curatorial skills by inviting one guest artist each to exhibit. There will be over forty artists exhibiting in pairs exploring a vast array of topics. Go to the Core Gallery site for more info: www.coregallery.co.uk

I invited Annabel Tilley to be my guest artist. Our collaborative wall installation is entitled Extreme Narrative. We explore interrupted identity through a pairing of her ’64 almost-identical drawings of Josef Fritzl blindfolded’ and my ‘6 obliterations’.

For a preview of our Extreme Narrative go to my news page at http://www.jlbfineart.com/News.html

The frontiers of isolation have just shifted – hooray!!

What are the boundaries of isolation?

I feel myself in a funny place; mentally, I’m engaged and could be even more so, physically, I’m still in rural France working and learning alone.

Straddling engagement and isolation brings up questions of self determination because it seems, now, more than ever I must bring to bear all my experience, knowledge and talent to propel myself forward. I must find the right measure and order of each of these things. The emphasis here is I must do this; the I which has been determined by social influences but yet acts alone. Not only must I use what I have gained and all that I am, but I must also add to and perhaps redefine the gain and myself. I must continue to fund my experience and knowledge and perhaps find undiscovered talents.

When I started this blog my goal was to engage with other artists and all my thanks to the Artists Talking community for helping me to do this. I have found new artist friends and colleagues and new opportunities are opening up to me, it is wonderful. I’m moving from a position of total self containment to one where I bump into others.

In that contained environment I thought as I liked, explored as I liked and did what I liked all in relation to a very nebulous ‘out there’ idea of art world conditions. Bumping into others is in many ways far more stimulating but more unnerving. The comfort of knowing what I mean and how I mean within the confines of my thoughts is not translatable to others. I am left with knowing my mind and all the world is outside of that. Perhaps it isn’t possible to move from the straddling position of engagement and isolation – we all straddle the same gap. Maybe the trick is to keep both in view and in balance neither fearing the isolation nor the engagement. 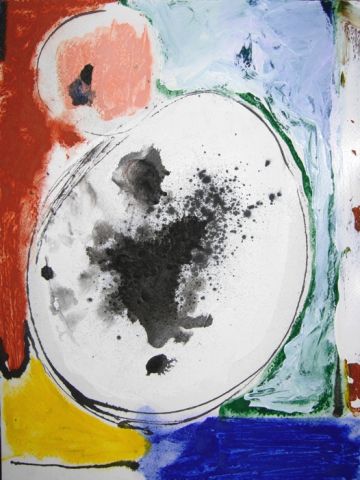 In response to David Minton’s question on my post #19

A great question David, and straight to the heart of the matter! He asks, ‘How does the work that you make engage the description that you give to it?’ That is precisely what I am trying to find out if I do successfully. Let me try and answer on two levels, first in regards to title, because the title is a sort of description for me and second in terms of theory.

I like short, concise, preferably one word titles. I like them because I want to hint at my meaning for the work without confounding a viewer with a long title that may interfere with their own reading of the work. I often find a title as I work and it is often a very intuitive thing; simply, something will occur to me. If that doesn’t happen, I consider the work until something comes. In either case, I question then if the title relates to the work, to the concept/theory and does it help to bring the work and theory together. I have to feel that it does all those things before I keep the title.

I’ve been told, ‘the theory comes from the work; don’t try to make your work fit theory!’ Sorry, but I don’t work that way. I do agree that trying to make work according to a rigid set of theory rules could be very confining (although, I don’t think Mondrian found it so), and work made from theory risks becoming contrived. But for me having theory circling in my head as I enter the studio arms me for battle, so to speak. When I enter the studio and confront the white, all of the things I’ve been studying and reading go with me. I never confront the white unarmed.

But have I been successful? Does the work I make engage the description I give to it?

Well, one of the ways it engages the description is perhaps through what I could call ‘the mirror element’ or ‘duality’ as I said originally in post #19. Two similar elements suggest a split or confrontation and as I’m working with the concept of the impossibility of the self to fully identify with itself, this seems fitting. There are also disembodied fragments or features in my work which could suggest this limitation of identity.

I also explore the paradoxical idea that context defines and obliterates the self (or the identity of the self, if you like). I think this may be visible by the imperfect and chance occurrences which happen in my work, areas of collision and by the use of gesture itself. The gestures in my work are not heroic; they are gestures of transience – fleeting, momentary, and tentative. There is an identity behind the gestures, making the gestures, but this self isn’t given full allowance to state or stake its presence. It is an interrupted identity.

Sean Burke’s ‘The Death and Return of the Author’ has influenced my concepts of the self a lot. It boils down to the fact that even if an author or artist removes their voice or themselves from a work, very much as Burgin does in his conceptual pieces, the audience still takes their direction from the ‘voice’ in the piece, reading it as the voice of the artist. So the author/artist can never fully remove himself from the perception of his presence by the viewer. My use of gesture is the ‘return of the artist’ in the notion of the self and the post-structural effort to kill off the self (as in death of the author). Likewise, I don’t use gesture in the way the Abstract Expressionists used it; a sort of ‘I am man hear me roar!’ My gesture knows it hasn’t got long to state its case. I think that feeling of movement, transience and perhaps even agitation is visible.

I hope that has answered your question, David, because, man was that hard! 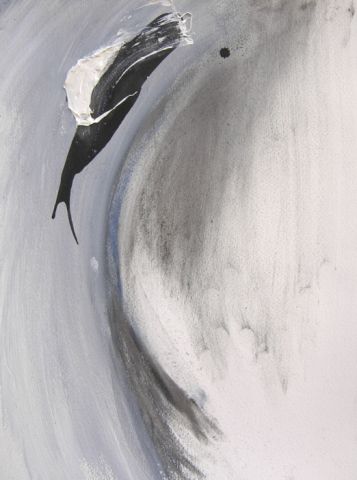 I think I’ve discovered something in my use of the word ‘duality’ to Nicola Dale – I think in two’s.

It reminds me of a program I saw years ago about Buckminster Fuller, the designer/inventor of the geodesic dome and all around inventive genius entrepreneur – http://designmuseum.org/design/r-buckminster-fuller

He saw the world in triangles. He told a story of when he was a child his class was given some toothpicks and green peas and told to build a structure that would stand. Most of the children built cubes, if they managed anything at all, but Fuller built a three dimensional triangle. It had a triangular base and he used three more toothpicks, one attached at each corner of the triangle base meeting in an apex to finish his shape. According to his story, his teachers were astonished.

The first lesson I had in art was from my grandmother. I remember drawing a picture and putting two checks in the sky for birds. My grandmother told me I should put three, ‘two over here and one there’, to balance the picture with three things, ‘the Japanese do it that way,’ she told me. I didn’t know what a Japanese was or why they balanced their pictures with three things instead of two, but I took her word for it and from then on I put three checks in my skies.

I still think in two’s though, and I find myself frequently working with two elements, or space that is divided into two. I find it really stimulating. Now that I understand more about balance and symmetry, the challenge is to un-balance those two elements, not by adding a third element as my grandmother suggested, but by sticking to the two elements like grim death and working through symmetry to find what is not balanced, what is unpredictable.

Don’t know that is has any significance whatsoever, I just found it interesting to discover as I was thinking about why I chose the word ‘duality’ in my last post. By the way, I had to chuckle at Nicola’s piece titled ‘Hell’ on her website, check it out http://nicoladale.wordpress.com/category/artworks/f-h/ 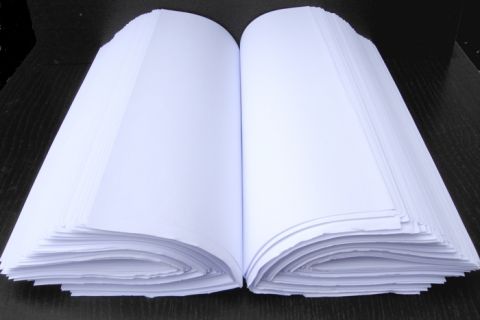