Can a work of art really be connected to the artist when the artist hasn’t made it or perhaps even touched it?

Breaking through the restrictions of medium, what Rosalind Krauss calls the post-medium condition, shattered the boundaries but has it lead us over the cliff?

Heightening perception, honing thought, sharpening the act of looking are all extremely important but is it really art until they are mixed with the attempt to communicate? That’s where art becomes poignant. The frailty of our grasp on what lies beyond us means certain failure in our attempts to communicate and that is what is absolutely magnificent about creation. It is not possible to communicate perception but we try and in the attempt we expose all it means to be alive. We can’t do this without a medium, without a tool, something we can shape – and I’m not talking literally here in the conventional understanding of medium, tools and form.

Many critics believe the days of media specificity (to use artspeak) are gone. Artists like Kosuth, Bergin, Broodthaers, Duchamp smashed those barriers and the mundane workings of paint, metal, plaster, wood no longer hold the mysteries they once did for many artists. But that’s not to say they’re dead (refer back to my posts 29-32 for a discussion of painting with Rob Turner). In fact, I believe we are about to see the phoenix rise from the flames. Medium is being redefined and Krauss is spearheading this redefinition.

She calls medium the technical support of a work, not the physical support like canvas or armatures. One example she uses is the work of Ed Ruscha. In his works, twenty-six gas stations, Krauss claims Ruscha is using the automobile as a medium. His use of the car-culture in America enabled his exploration of the American psyche. I might add, not unlike the way Edward Hopper explored isolation and the American psyche in paint a generation before, but Ruscha is doing it via the car. These works by Ruscha are photographic in nature but they have nothing to do with the process of photography. These works explore the process of driving, which is a state of isolation.

I’m inspired by this redefinition of medium by Krauss; it is one of the main motivations behind the work I create. I’m called a painter but I use very little paint in my paintings. My work is not about the application of paint, nor is it about how the paint (or other material) looks on the canvas. It’s not about the relationship of paint/material to canvas. It’s not about the limitations of paint or canvas or of the two dimensional plane. It is about how my movement is registered in the materials I put between myself and the canvas. It is about how no matter what I do my context has a direct impact on what I attempt. It is about how classification (socialization?) orders me and my thoughts. In short the technical support of my work – my medium is movement and it is a movement, which combined with thought, equals the presence of an individual.

I’ve been doing too many left-brain things and far too few right-brain things – I fall into that easily, understanding myself to be an analytical personality at the best of times. But in a way, it is good to have a bit of a break and a step back from creating work. It gets a chance to settle, right?

Being preoccupied of late, I have almost missed out on the discussion of why we bother to make art raised by Annabel Tilley; a poignant and disquieting post. This statement, ‘Yet, galleries would cease to exist without artists. However, it seems doubtful many artists feel this sense of power,’ brings me back to a post I never posted and would like to now.

The whole art world thing would not exist without artists. We are at the heart of it, why then do we not have more power over our art and our careers? How confident do you feel as an artist to make pronouncements about your work? Can you say what it is about, why you made it? We are encouraged to talk intelligently about our work, to relate it to historical or current trends. I wonder if we do that and get it wrong, where that lands us.

I feel there is a point when an artist must stake a claim and say with confidence and conviction what he or she is doing. But what is behind that confidence? How much reading is enough reading, how many exhibits viewed? Do we actually only begin to get a handle on where we may be situated by listening to other, perhaps more powerful people, talk about our work? What if we disagree with what they say? What if no one is talking? And perhaps worst of all, what if we start believing our own press?

Annabel asks further, ‘So remind me, why do we do it? What is it all for? And, what real alternatives are there?’

These questions are the very ones we ask of living, not just art. And they are the very questions we humans have never been able to answer satisfactorily. I can offer no answers to any of the questions Annabel, I or others raise, but I can speak for myself and say I do it (make art) because I cannot live without doing it – and I’ve tried. It is for the hope that I can find freedom even if it is only in my mind; the only real alternative is death, either literal or metaphorical.

And on that cheery note I’ll add this:

I can live for two months on a good compliment.

I’ve put my genius into my life; I’ve only put my talent into my works.

And Thanks to Becky Hunter for the opportunity to contribute to her blog: 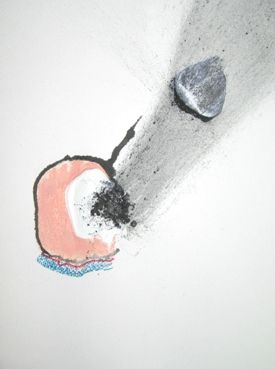 Bless Nicola Dale. She hit the nail on the head with her question: do you see your paintings as actual amalgams of other painters’ mark making down the ages onto the canvas in your here-and-now? Having read your cut and paste paragraph, I am wondering if this is the path you are trying to steer your viewer down…?

I have been working with these texts from my last post for the past several weeks trying to formulate and clarify my thoughts in regards to my latest work. I was going to use them to sort of help describe where I was going in my paintings, but I found as I continued to look at them, read them, consider them, they started to take on a life of their own. They, in effect, became a work of their own and it does parallel what I am attempting with my painting.

I think I must clarify something too. I responded partly in the negative to Nicola saying, “I’m not sure I would go as far as to say I’m trying to make an amalgam of other painter’s mark making just because I’m not trying to copy or imitate anyone’s mark making.” I can see that would perhaps produce some raised eyebrows because there is no denying that some of my marks look like other artist’s marks. What I mean is that I am not making a study of how an artist made a mark in order to mimic it. My drips are my drips, they are not copies of Jackson Pollock’s drips or Cy Twombly’s drips or any other artist who allows or allowed drips in their work. There is no denying that a drip is reminiscent of Abstract Expressionism or other Late Modern work and that is how I’m using a drip. I use a drip as a symbol of itself and of Late Modernism. My marks are my own and they are the things in this new work which reassert my identity as the artist. I focus my attention on how I make marks rather than how other artists made marks.

I am trying to amalgamate concepts, not just because it is what I’m seeing in regards to postconceptualism but also because amalgamation seems to be something that is true for me. Life has been a curious set of disparate realities all glued together by the very fact I have lived through them. I mean, life has not been a straight line of events for me. It has been more a series of events which have started & stopped, switched & changed, moved & shifted and the only continuity is my perception of the passage of time.

So once again the path I take artistically relates to what I know as a truth, personally.

Becky Hunter was kind enough to interview me recently and we talked about this point. She based her interview on a posting I did a while ago, #14, about what I feel are the responsibilities of an artist. She asked me “…when did I find out what I wanted to communicate?” Finding what I wanted to communicate wasn’t hard; the effort has been finding a way to express my personal experience in a way that is neither pedantic nor self-indulgent.

So where does the personal end and the art start? That is always a question, and it’s a question, I think, without an easy answer. We’re in a period where art is, or has dematerialized and those distinctions between art and life are perhaps blurrier than ever. Maybe it’s time to glue a few pieces back together and move forward.

All that should concern us is the acute and increasing anxiety of the relation itself [of art to artist], as though shadowed more and more darkly by a sense of invalidity, of inadequacy, of existence at the expense of all that it excludes, all that it blinds to. Art itself is an activity of change, of disorientation and shift, of violent discontinuity and mutability, of the willingness for confusion. It is the declared intention of doing away with coherence (coherence is in fact a characteristic of concatenation of the system), the loss of identity with oneself, for an abandonment of reassuring recognition that is continually imposed by others and by the social system; an act to live by means of continual isolation. It is the object-subject as physical presence continually changing. It is an ensemble of units to be reactivated by the beholder-manipulator, but when is such ‘reactivation’ too great a burden to place on the viewer? Previous attempts to involve the audience directly, as in some conceptual art, risks illegibility, which might return the artist as the principle figure and the primary interpreter of the work. It must be admitted, ‘the death of the author’ has meant not ‘the birth of the reader’, so much as the befuddlement of the viewer.

This is an act of postconceptual thinking.

This paragraph was assembled using various texts by different authors spanning a time frame of 55 years, 1949 to 2004. The use of footnotes has purposefully been omitted to retain a readable continuity. This is not plagiarism. It is a melding together of dispirit thoughts giving rise to meaning. There have been slight alterations to the texts in some instances for the purposes of readability.

The references are as follows: 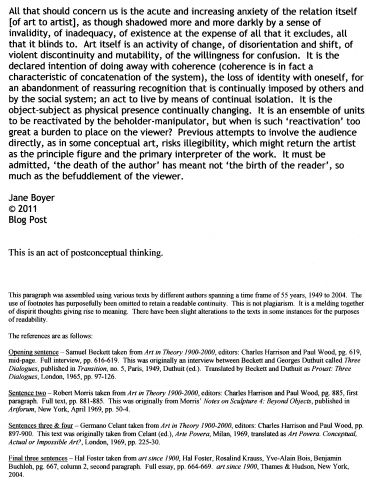