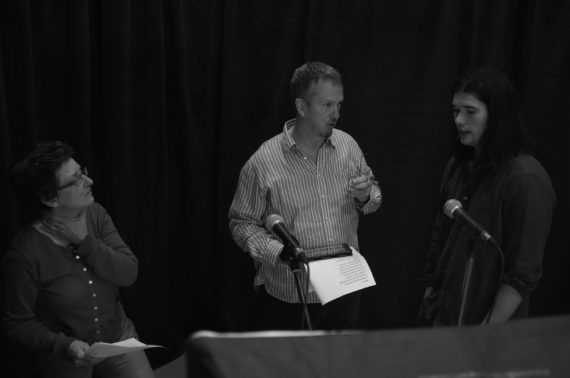 Dorian Braun is one of the selected artists for this year’s Platform exhibition at the Edinburgh Art Festival. Supported by a-n, Platform aims to promote the work of early career artists based in Scotland.

Braun graduated from Dundee’s Duncan of Jordanstone College of Art and Design in 2013. He now divides his time between Glasgow and Leckmelm, a small settlement near Ullapool in the Scottish Highlands.

For Platform, Braun – who grew up in Scotland and describes himself as “half German” – will be presenting two works: a sound piece, In Alto and Bass, inspired by Goethe’s play Faust; and a new book work informed by research at Inverness Museum and Art Gallery, focusing on the Alexander Grant Collection and his Rondello violin.

Braun has developed an interesting and varied practice over the last three years. When studying in Dundee, he worked in collaboration with fellow student Jack Paton. For one piece, the pair sawed a log and exhibited its offcuts, leaving behind the smells and sounds of their labour.

Having moved to Leckmelm in 2013, Braun built a wooden hut with his partner Tiril in the nearby forest. His interest in wood has continued and he now explores its many resonant qualities. In 2015, he undertook a three-month residency in Enschede, Holland which is where the work, In Alto and Bass, first took shape.

Braun is also part of the team behind Glasgow’s The Project Café, a social enterprise in the city centre providing a community space founded on the ethos of “good food bringing people together”.

In Alto and Bass is a reconceptualised version of the prologue from Johann Wolfgang von Goethe’s play, Faust. Can you explain what drew you to that particular work?
I am not a Goethe or Faust scholar but my undergraduate dissertation did reference his work, and In Alto and Bass inhabits a prolonged interest in that research. I am half German but have lived most of my life in Scotland, moving back and forth between the two countries. Goethe is a megalithic figure in German literature, so Faust is maybe a way of understanding my cultural identity, but there is also a personal connection. When I was growing up a friend’s dad taught us the prologue – the choice to use it has come from deeply ingrained memories.

What made you revisit it during your residency in Enschede and how did it develop into a sound piece?
The song kept going through my head when I was there, at which time I started speaking to the two opera singers who became part of the work – John Fernon and Ingret Van Ree. I had lots of questions for them, [such as] how they are trained and how their body is an instrument with its resonant qualities. 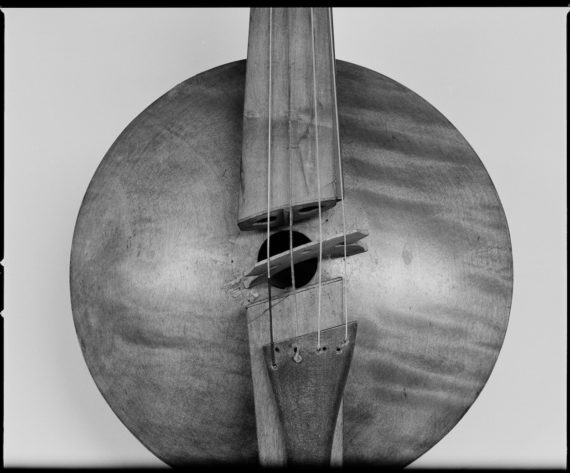 How did the residency help build space for the work to happen?
I am more opportunistic during residencies. You work with ideas and drive them forward because of pressure. In Enschede I was working towards a solo show, coming up with something pretty quickly. I used the opportunity to work with the singers and an engineer at the opera. The engineer had a thick 18-metre long black curtain, which was reclaimed from an opera theatre, that he allowed me to cut up and sow. We hung it from a circular rail creating a contained environment in the space to absorb sound, similar to foam lined walls in a recording studio. We recorded the piece using an analogue tape Tascam recorder. 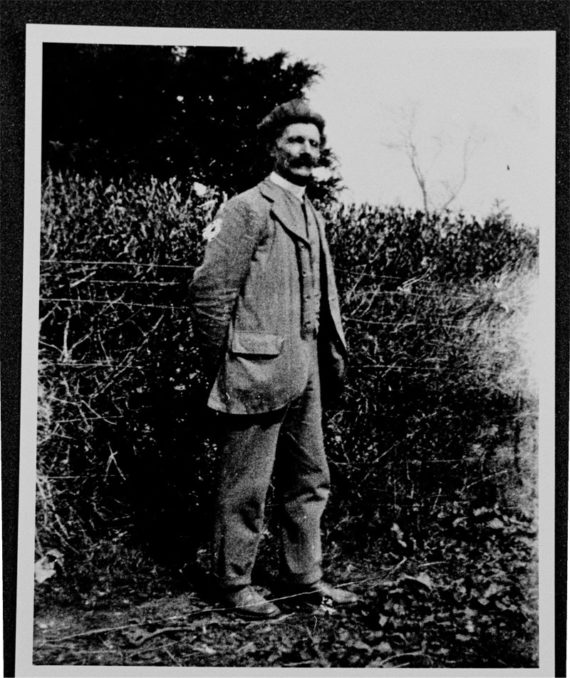 Collaboration has been very important in your work. Can you explain how it is still employed within your practice today?
When studying in Dundee I was part of a duo with Jack Paton. This collaboration established the basis for a way of working with other people. My interest in working with sound is a good example. I have used sound in video before, and more recently on residency in Spain I made a documentary collaborating with someone who has a small recording studio. We produced the sound for the film together. After this I decided to work on In Alto In Bass as a finished sound piece, but again it was essential to work with someone who had expertise – Bob Whitney, a recording studio engineer from the Royal Conservatoire of Scotland. 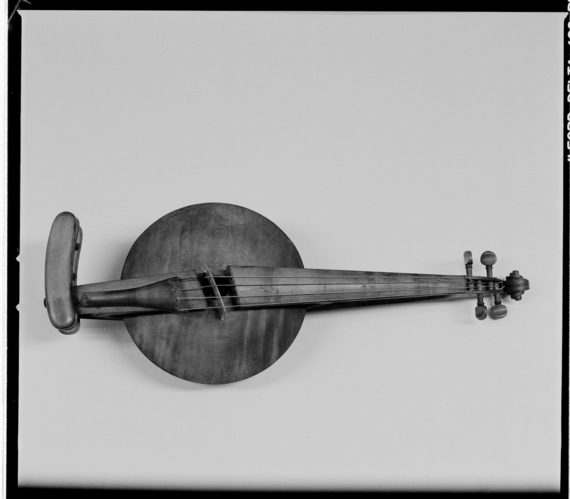 Can you explain more about the book work you are exhibiting?
I have worked on the book with Cristina Garriga from My Bookcase. It started during a Graduate Residency in 2014 at Hospitalfield [in Abroath] where I met Jasper Coppes, an artist from the Netherlands. I talked with him about the Alexander Grant violin researched in the archives at Inverness Museum, a Rondello instrument known its for purity in tone and resonance. My initial thought was to rebuild the violin and Jasper was interested too. This would cost lots of money, and we needed to see if it was worthwhile. So I looked deeper into the archive for more material. The book is a study of this research, focusing on Grant’s instrument and the frequencies and vibrations its wooden components produce. 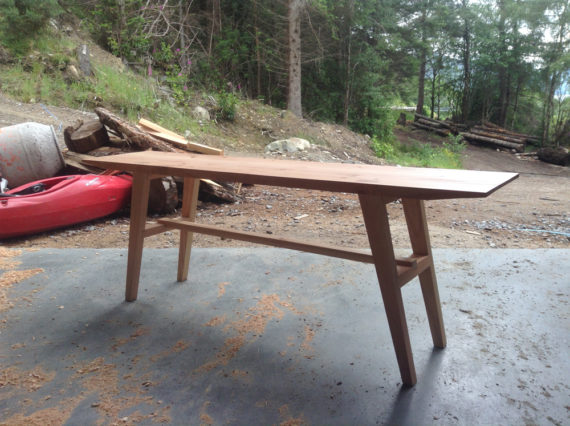 You have put the book together in such a way that it becomes an imagining of a perfect sculpture. You seem intensely interested in explaining its materials.
I am very interested in the making process. For Platform, using traditional joinery I have made a bench from Douglas fir, felled and milled in Leckmelm woods. I have also made the speakers for In Alto and Bass with MDF and a white oak veneer. This was a hugely important part of the work for me. I looked into what sounds different speaker cabinets make, the right drivers to use, the correct electronic components. Both the speakers and bench were constructed in a woodwork shop in Leckmelm, usually used for building eco houses. 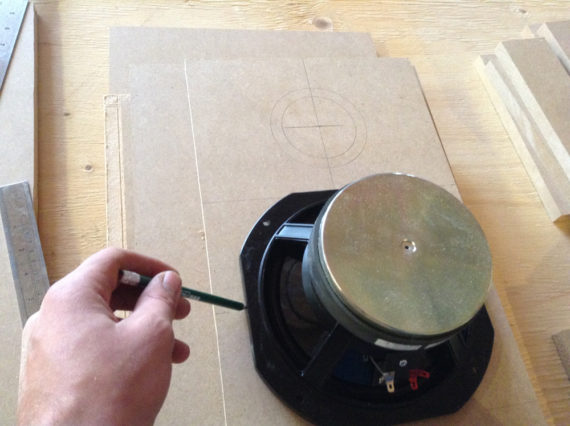 You are showing the book and the sound piece in a group exhibition. Can you explain the dynamics of this?
I thought about installing the work in a black room with sound insulation to contain the experience of the work. But this is not the case; the lights will be on, you will see the bench and the speakers I have constructed. I am looking more at how the production of it all can be a way of asking questions, coming from a place of not knowing. Starting from being honestly ignorant, gathering information, people and skills – allowing the ideas and objects to reveal themselves.

For more on Dorian Braun’s Platform project, read his a-n blog. Other Platform artists blogging about their work for a-n include the duo Proudfoot and Piasecka