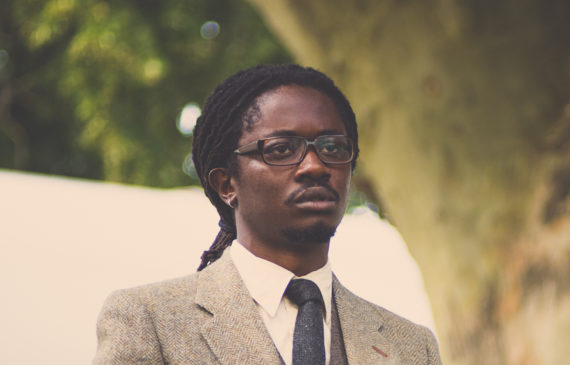 Larry Achiampong is a London-based artist whose work is concerned with ideas surrounding class and cross-cultural identity.

Exploring the fractures of a world shaped by social and digital media, his works range in form from sculpture to online media, sound to live performance, manipulated photography to installation.

His latest work, FF Gaiden ESCAPE – part of an ongoing collaboration with David Blandy that unearths the writings of the anti-colonial thinker Frantz Fanon – is currently on show in the group exhibition, ‘Untitled: Art On The Conditions Of Our Time’ at New Art Exchange, Nottingham.

Achiampong has also completed residencies, both as solo artist and in collaboration with Blandy, at Tyneside Cinema in Newcastle, Praksis (Oslo), The British Library/Sound & Music and Wysing Arts Centre, Cambridge.

He will be presenting a new piece, Sunday Best, in the Diaspora Pavilion at the Venice Biennale later this year. 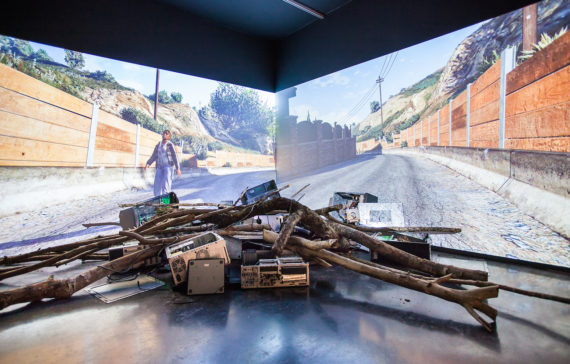 The piece you’re showing in the ‘Untitled’ exhibition in Nottingham is linked to the Finding Fanon series, is that right?
Yes, the work we were commissioned to make, FF Gaiden ESCAPE, is part of a series of collaborations with David Blandy. There are three films so far, and Finding Fanon is something that we’ve been developing together since 2015. The FF in the title refers to Frantz Fanon, who was an important writer on questions of colonial history and the politics of race through the mid 20th century. Our own research focuses particularly on three lost plays that Fanon is supposed to have written but never had performed or published. The manuscripts and the texts of those plays have never been found, so our starting point was to ask the question, “What would those plays Fanon wrote have been about? What forms would they have taken?” Finding Fanon is about David Blandy and myself exploring Fanon’s ideas through a series of conversations, interviews and encounters.

Where did the interest in Frantz Fanon come from?
My own interest in Fanon comes not just from the profound effect his writings and ideas had on my own practice as an artist from very early on, but also the way his writing speaks very directly to my experiences as a young black male growing up in England, experiencing the various structures that are at the core of his thinking about colonial history and racism. For the first Finding Fanon film, David explored his own background as a white middle-class male, interviewing his grandfather, who’d spent time in Kenya working for the British authorities during the Mau Mau revolts, while I talked to my uncle, who between the mid-1980s and early 1990s had been a paperless migrant. It was particularly important to me because not only my uncle, but much of my family, had lived through that experience of being paperless migrants at one time or another. When British newspapers were, and still are, constantly talking negatively about migrants, labelling migrants as ‘vermin’, it seemed like a real necessity to talk about these subjects from other perspectives. 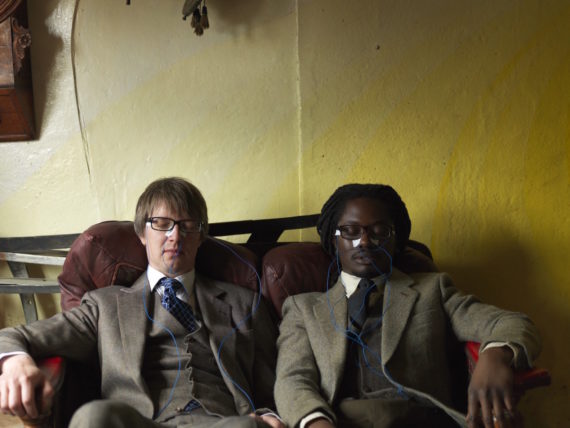 The films often have a post-apocalyptic feeling that seems to be echoed in the smashed computers and broken wood piled in front of the two screens at New Art Exchange?
The rubble represents history and technology for us, and we’ve talked about ‘conflict materials’ – minerals like Coltan, that are essential to building electronic devices, without which we wouldn’t have phones and laptops, but which also come from places like Congo, mined under conditions of civil war by people working in highly exploitative conditions. The thing that complicates our interest in the possibilities of technology is that there is this ambivalence there. On one level we see these devices as being full of amazing potential for communication between people, as tools for breaking down barriers, but we also need to acknowledge that they are dependent on systems of exploitation of exactly the kind Frantz Fanon wrote about.

Your Cloud series also seems to touch on Fanon’s ideas about  representations of blackness. It’s like an emoji, but uses the most reductive representation of black identity it’s possible to make.
The Cloud work came out of two things for me: an interest in emojis as a pop cultural language and thinking about the way racism worked on a day-to-day level when I was growing up. To impose a single reductive image that represents “blackness” onto every person represents a way of degrading people, reducing them to ciphers, as a racist view obviously does. In my own experience in East London, I was always conscious of being seen as black by other kids, and when comments would be made – not necessarily maliciously or even consciously – they’d heighten my feeling of not belonging. The Robertson’s gollywog is in there, too. I saw it on jam-jars in England and asked my mum what it was, but she couldn’t explain it because she’d grown up in Ghana and hadn’t been exposed to those kinds of representations of black people. 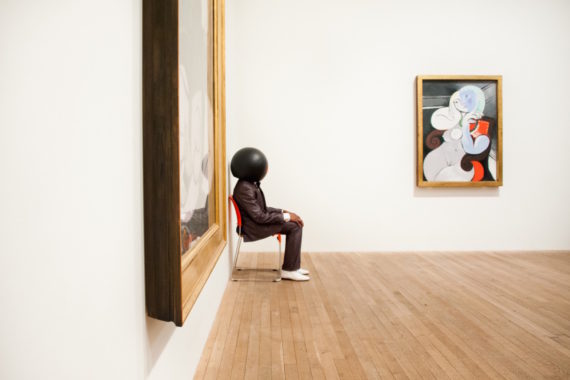 In another series of works you’ve turned skateboards and pool cues into objects that look like tribal artefacts, as though you’re performing a kind of ‘Africanising’ of that East London culture you grew up in?
It always comes from picking up information from different places, having all these various inputs, if you like. So alongside the things I experienced on the streets there was also my home life. The patterns painted onto those objects are partly based on Indonesian batik designs, but also on designs from the textiles made by people from my own Ashanti tribal background, Kente cloth. The works utilising pool cues and skateboards represent moments where the East London and Ghanaian sides of my experience come together in a hybrid way. The remix project using high-life records is also about this, trying to bring together that popular Ghanaian people’s culture with the kinds of machine-based electronic music – all the house, garage and hip-hop – I’d grown up hearing in East London. I wanted to make those connections between people in different parts of the diaspora.

I know your high-life remix project has also been released as a vinyl LP and performed in clubs as well as galleries – is that important to you?
I’ve been very inspired by the way someone like Theaster Gates opens his practice to include communities outside the art world, and it is very important to me to present this work in places like clubs, take it outside galleries sometimes. On one level, I did a residency at the British Library, where I explored sounds from West African communities, but I’ve also made new performative audio-visual work like Pho3nix Rising for Open Source in Dalston. I like that potential for connecting with people, embedding what I’m doing in wider conversations, histories, and ways of sharing information, and I don’t think art, or artists, can really function without collaboration. The white cube-style gallery space is fine but I like to think it’s not the only space where the kind of thing I do, the kinds of work I make, can exist. 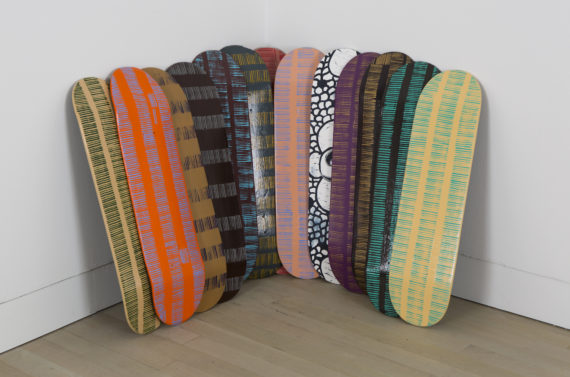 Can the ongoing collaboration with David Blandy be seen as another step towards that more open and collective way of working?
Beyond that particular collaboration, it’s also the case that my performances and collaborations with David have regularly involved other people, and out of those networks has emerged a group, Network 11, which is mostly made up of Black British-based artists with their own practices. That’s a model I’ve learned to value from looking at earlier generations of Black artists, people like Keith Piper, Sonia Boyce, Donald Rodney and Eddie Chambers, for whom those kinds of networks were vital in sustaining their work. Because we all met and began to think about Network 11 at a time when there were massive question marks over everything – a situation where even well established and hugely respected organisations like Iniva have been savagely cut – it’s partly about finding an answer to the question of how, in this economic context, we can continue to make work, how we can support each other to tell our stories.

‘Untitled: Art on the conditions of our Time’ continues at New Art Exchange, Nottingham until 19 March 2017. www.nae.org.uk 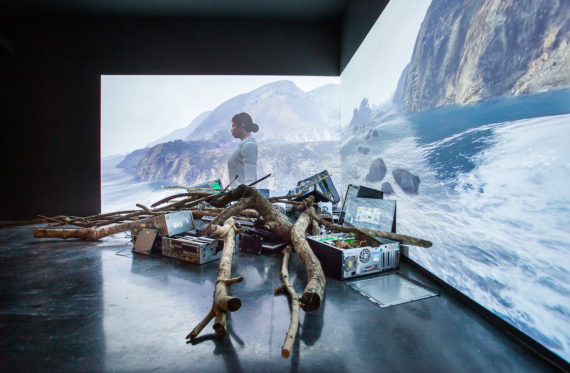