A Q&A with... Lawrence Lek, artist and creator of digital environments - a-n The Artists Information Company 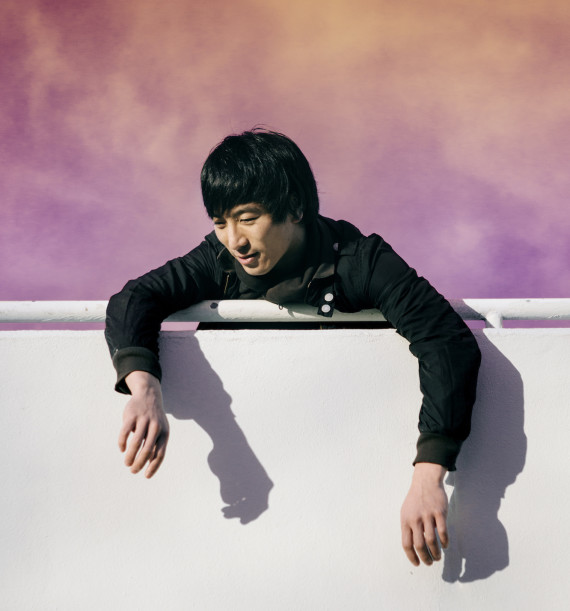 “This is definitely the biggest commission I’ve ever done; it’s obviously quite different from underneath a railway arch in Peckham!”

Created, like much of his site-specific work, using 3D rendering software, the new work is set in a future when Scotland is an independent country. It constructs a fantasy narrative based around a Glaswegian artist bringing Clyde-built cruise liner the QE2 back home from its current resting place in Dubai. 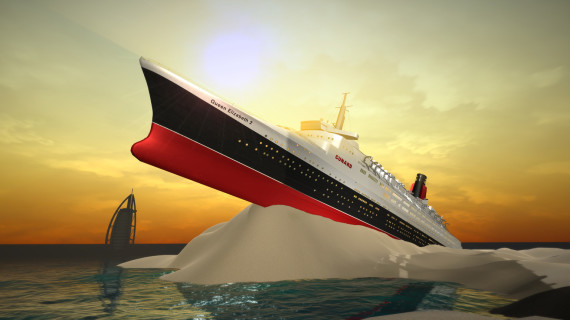 Lek, winner of the 2015 Dazed Emerging Artist Award, is known for work that uses the visual language of computer games to create simulations of real world environments that morph into surreal virtual spaces.

His ongoing Bonus Levels series – described as ‘a utopian work in progress’ – includes software, videos, performances and installations. Its most well-known iteration is Unreal Estate (2015), in which the Royal Academy has been sold to a billionaire to be used as a private mansion.

While Lek’s works usually feature an interactive, game-like element, for Glasgow International he has focused on a narrative-driven video, presented alongside a 3D sculpture/maquette. 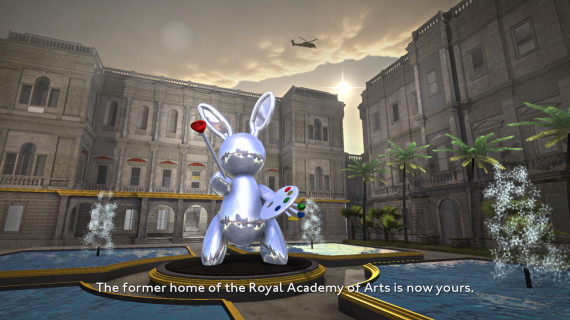 You’ve constructed a compelling fictional narrative for your Glasgow International commission. Can you explain more about it?
A Glaswegian artist has raised money to bring the QE2 back from Dubai in order to turn it into an extension for the Glasgow School of Art. It starts with the ship in Dubai and it’s taken through the Suez Canal, the Mediterranean, round the North Sea, past burning oil rigs and these different symbols of political change in Europe at the moment – it begins as a ship beached in the sand and ends up being cut in half to create this twin, mega skyscraper for the art school. So it has an element of fantasy but also this critique in it. It’s also referencing the old British maritime art tradition. I guess [Turner’s] The Fighting Temeraire [1839] is the end of the age of sail into the age of steam, so this is the end of the age of physical things and the move into this different, neoliberal creative economy.

Why the QE2 – what attracted you to it for this particular commission?
The show at Tramway is based around the idea of making and fabrication, how it has shifted in Scotland and a lot of the UK away from the heavy manufacturing of the ‘60s and now to this new kind of economy. I wanted to choose a symbol of Glasgow that has these different ideas embodied in it – the political, the idea of the city, the idea of making or the absence of it. When the QE2 was built in the ‘60s it was quite controversial because it’s essentially a luxury liner and was also the swansong of the Glasgow shipyards [it was launched in 1969]. So it’s not just got this nostalgia for the past and the good old days of British making, it also has a lot of political and social issues to do with working and labour embedded in it as well. I wanted to reflect on all these things.

There’s a room in the Zaha Hadid-designed Riverside Museum in Glasgow that is full of scale models of ships built on the Clyde. Viewing them is actually quite a melancholy experience.
I know exactly what you mean; there’s this real nostalgia and sadness and feeling of loss. One of the things I’m most interested in with my work as well as the uncanny is the psychological feeling of loss you can get when you encounter very new things, not necessarily very old things. So for example, in a room which is basically a graveyard of ships, many of which no longer exist, you get that sense of nostalgia or loss – a tiny version of the sublime. So what I’m particularly interested in with this piece is to think about that; using new media to convey this idea of loss and regeneration and ultimately some kind of weird resurrection that the creative economy leads to. 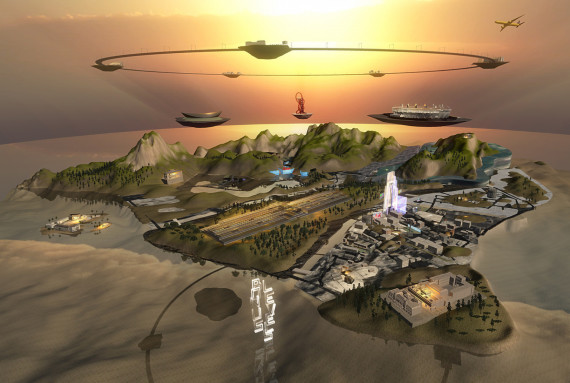 Your use of digital technology has attracted a lot of attention, particularly through the Bonus Levels series. What, for you, is its significance in your work?
I’m trying to be site specific rather than hemmed in by any one medium. So for me, the reason for doing Bonus Levels in the first place was about asking, what if visualising a work was just as psychologically effective for the viewer as fabricating it? And so everything has come out of the realisation that even if it’s a video game aesthetic, after 30 seconds no-one thinks about that anymore – they’re just immersed in the piece whether it’s a video game or something being seen in a screening room environment. I think most people nowadays have very sophisticated visual literacy. And because I’ve operated in this idiom for a relatively long time I try not to over intellectualise the fact that I’m producing a simulation. For me, it’s just the easiest way to create an entire world, it’s as simple as that.

One thing I’m particularly interested in with my installations and videos is the kind of communal space that gets created. So for example, if three people go to watch the film, then they are not just watching the film but also watching each other watching the film as well… In a similar way, with quite a lot of my Bonus Levels work you might have a typical scenario when two people go to an exhibition together and one person takes the controller and the other one watches, and then after a while the other person takes over and they explore the landscape in a very literal way – you know, ‘Oh, we’ve been here before, go and check out that place’, etc. 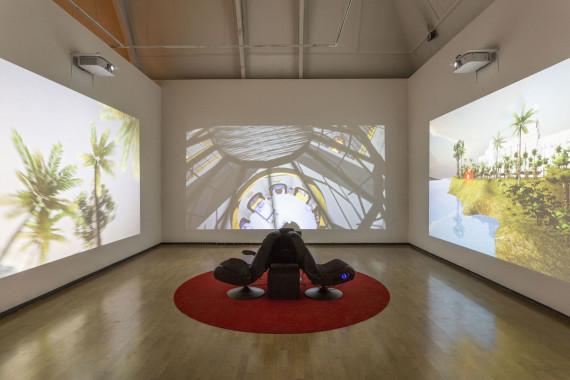 There’s a lot of interest in virtual reality (VR) and its potential use by artists at the moment. How does that relate to your approach?
If I say virtual reality the first thing that comes up in a lot of people’s minds is this goggle-like headset. And for me, it’s a [problem] when something is so strongly identified with the piece of technology that enables it, especially when it’s such a clunky thing. With virtual reality you get a whole kind of different experience which is much more enclosed or solitary; I’m more interested in creating a different kind of social, meditative environment. I’m sure it [VR] is something I’ll explore at some time but only if it feels right for the subject of the work, not the other way round.

Do you feel ultimately that working with technology like VR is an important place for artists to be?
Absolutely. The Holy Grail for some artists is being able to create or recreate a whole environment and obviously that’s what VR does. But for me, the important thing to remember is that what artists can do in an interesting way is not necessarily to create the best content for that medium but to create the best critique or playful exploration of the medium – for obvious reasons, these are the things that get ignored by commercial developers.

Glasgow International runs from 8-25 April 2016. The exhibition at Tramway continues until 22 May 2016. glasgowinternational.org 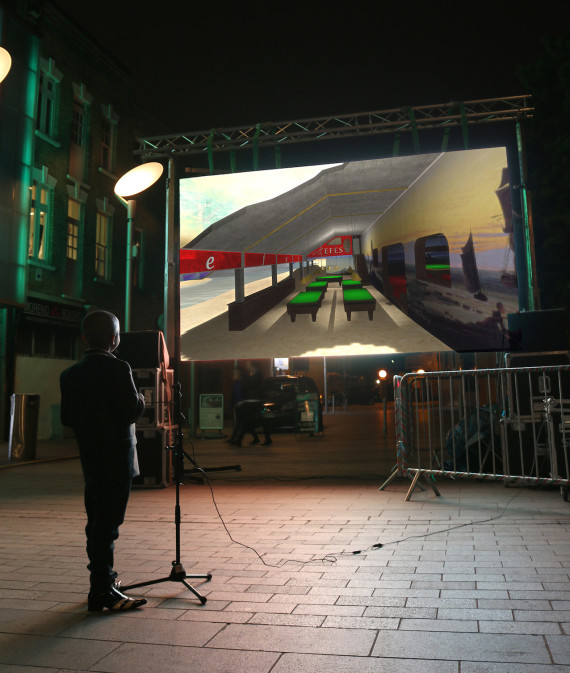 A Q&A with… Henry Ward, artist and educator at Freelands Foundation

For more interviews in the series, use the Q&A tag