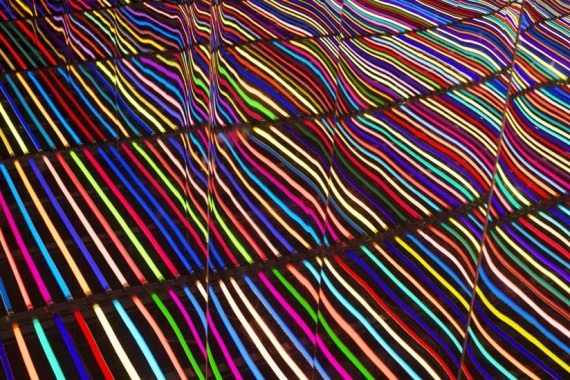 As part of the UNESCO International Year of Light, Liz West has just completed An Additive Mix, her £30,000 commission for the National Media Museum’s exhibition Light Fantastic.

Entering the exhibition, the audience encounter a number of static objects from the museum’s collection – the first Technicolour camera, shadow puppets and other film artefacts that consider colour, light and illusion. As they enter the second room, an intense white light emanating from West’s constructed 10m x 5m space, lures the visitor into the immersive experience that is An Additive Mix. The walls entirely glazed with mirror and with a ceiling lined with 250 6ft long fluorescent lamps the work is based on the concept that all colours combined together will create white light.

Over the last eight years, West has been developing her photographic, sculptural and installation works inspired by colour science and light theory and An Additive Mix’s title references Josef Albers seminal publication, Interaction of Colour.

How was the experience of making the work for the Media Museum?
It’s been a real learning curve for me. I have learnt a lot from it and I’ve taken the role of project manager as much as being an artist, because I’ve had to have conversations with so many different parties to make it all come together – the fabricators, the builders, the electricians, the architects and the designers, the museum itself, the directors, the curators, the learning team, press team, so everyone – there’s a lot of people involved to make this cohesive thing.

I have worked on other exhibitions where its been like that, but not to this extent or scale. So, that’s been great. I remember them saying to me when I was awarded the commission ‘we are aware that this is the biggest thing you’ve done and we are going to look after you’ and that was quite a relief.

I feel very lucky to have been given this quite early on in my career, because I feel I’ve now got the skill set from experience to work on commissions of such scale in the future.

Did you start out as a sculptor and at what point did you start working with designers and fabricators?
I graduated from the Sculpture and Environmental Art course at the Glasgow School of Art eight years ago, so 2007. I was on the sculpture programme and it offered me the opportunity to think about scale, to not be afraid of scale. My best ideas and work come from when I’m given a physical space to respond to, so often as a student I would book the bookable spaces on campus and just test and photograph and test so that model remains the same, even now.

My ideas are getting to a point where they are so ambitious that my skills as a sculptor and as a maker, and as a technician, are not good enough so I’m having to put it out to fabricators now – because I’m a perfectionist.

When did you begin working with these ideas to do with colour and light?
I’ve always been interested in colour and light together. As a child I was taken to a lot of exhibitions because both my parents are artists. From a very early age I knew that the type of work that I enjoyed was the ones you were able to go into.

I vividly remember for example the Days Like These exhibition at Tate Britain in 2003. I stepped onto one of Jim Lambie’s vinyl floor pieces and it had a David Batchelor tower in the middle. I was nearly physically sick because of how overwhelming it was and it made me happy. It didn’t put me off, it excited me. I thought, if I’m going to be an artist one day, this is the kind of effect I want to have on my viewer, this overwhelming, immersive, environment.

It was in my third and final year as a student that I really started playing with that, before I was not really knowing what I was doing but I’d always been interested in it. It took a tutor to sit me down and say do you realise that these elements that are coming through in your ideas, why don’t you actually make work about it. That was the catalyst.

What do you hope to do next?
Since I made [Your Colour Perception installation for Castlefield Gallery’s Federation House New Art Spaces] in Manchester in January, it’s been crazy. A lot has come off the back of that. It’s quite exciting times, but I’ve certainly got a full year ahead. I’ll tell you as soon as I have permission about future projects, but I can’t at the moment. Enough to keep me going until the end of next year, so that’s good. Being an artist has an uncertainty attached to it, and it’s nice to have a bit of a plan.

So are you able to work full time as an artist?
I’ve worked full time as an artist now since 2010. I don’t do anything else. It was a big risk going self-employed, throwing caution to the wind, but I think if I had a part time job, I know it would sap all my energy and I don’t think I could do what I do. The only reason I can go off on site visits and research and procrastinate and do all the things artists do is because I have the time to do that.

[After graduating] I got a job locally, not art related at all. It just wasn’t me. It was three years later, 2010 that I just thought, you know what, I’ve earned enough money in these last three years to have enough to just try it, to just see what happens and what I started doing was writing off proposals and applying for exhibitions using my degree show work. I was really lucky, I showed my work all over the world. It’s gone from there really, it’s been a natural development. It was my degree show work that saved the day.

An Additive Mix is at National Media Museum Bradford as part of Light Fantastic until 1 November 2015.