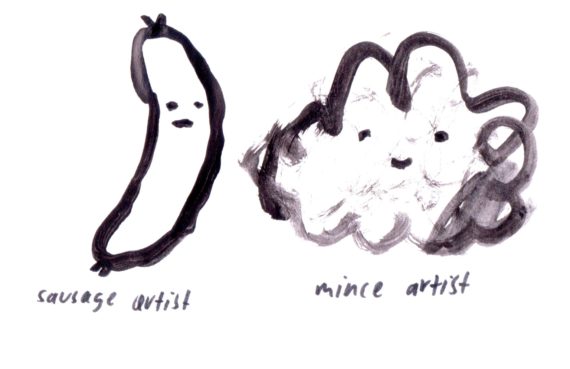 This is not a transcript of the slide show I gave at Jamboree, because that presentation had been improvised. This is a transcript of something I’ve been saying for a long time, so apologies if you’ve heard it all before. I also have to warn you that it’s not veggie friendly. And it’s quite reductive and binary. Enjoy!

I’m always busy, but it’s hard to say with what. As an artist who doesn’t use formats such as exhibitions, my work becomes visible seemingly randomly and often not as art. This is immensly enjoyable, but in weaker moments, eg when I have to apply for a job, I feel exhaused and confused, like I’m getting nowhere and have no strategy.

As an artist friend once said to me: “Nobody, not even yourself, has time to connect the dots.” Often the work is also deliberately non-authored and most of the time it is also collectively produced so it’s hard to assign a neat auteur identity. This results in absurd moments, such as the one described to me by another artist who explained how somebody had mentioned a project and said to her, “You’d really like this” – only for her to tell them that she was already involved.

Anyway, the messiness is what it is. And like so many people I’ve been trying to find a language for it. Not to box myself in or to make myself discoverable, but to be able to find other people who would be interested in what I’m interested in, to find and to give support. But this sounds a bit grandstanding and (good German word alert!) wischi-waschi. Which is why I’ve started to talk about mince and sausages instead of the usual terminology of ‘socially-engaged’ or ‘participatory’ or ‘people-focused’ or ‘useful art’, which mostly confuse art with an upper-class dating agency or is based on obscure dead old men theories.

Some years ago, when I was back in south Germany, I went to the local supermarket with my mum. At the till I saw a cooking magazine titled Ideen mit Hack, which roughly translates as ‘things to do with mince’. When I saw this magazine, featuring 60-plus pages full of recipes involving mince, I had one of those rare moments of enlightenment. I realised that what I and so many of my art colleagues were doing was ‘mince’.

Since then, I’ve wheeled out this mince moment numerous times. Because it is as simple as it is comforting. So, here it goes. 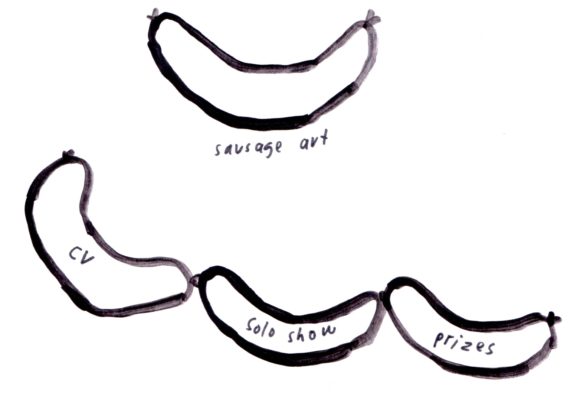 There are two kinds of artists: mince artists and sausage artists. Sausage artists make easily recognisable, tasty art sausages, like solo shows or performances from 6.15 to 7.30pm on a Friday evening. Some artists make these sausages because they like making them, they enjoy having a studio sausage and assistant sausages and then putting everything into a show sausage.

Once you’ve figured out how to make your very original art sausage, it’s also easy to reproduce them. There is a system to this. You start with a small independent sausage, then make an institutional solo sausage, then push for lots of review sausages etc. Sausage artists are much loved because they make clearly recognisable art sausages, they are easy to spot and easy to eat. Curators and collectors like sausage artists because it’s obvious what do do with a sausage.

Some artists make sausages, although they don’t really like them, but they think that it’s ‘what you do’. Sausage art is a powerful force on the imagination and it’s clearly here to stay.

On the other side of the meat counter are the mince artists. 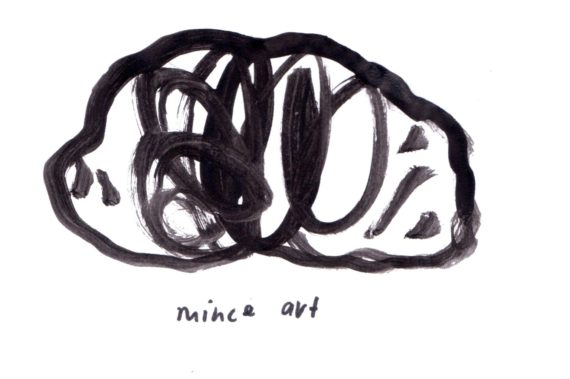 They make mince. Raw mince. It’s disgusting and a bit unwieldy. It doesn’t have the completeness and the accessibility of a sausage. You can’t really eat raw mince, it would probably give you E.coli. Mince art is very present, you can smell it from miles away, but it’s hard to describe because there are so many meaty bits that together form the mince.

Often mince artists work in the engine room of the art world. They are the producers, the educators, the designers, the facilitators, the cleaners, the communicators. Because what they do is raw, they get asked to shape their mince into ‘the education project’, ‘the panel discussion’, ‘the tote bag’. Because their work is not in sausage shape they don’t get asked to do ‘the work’.

However, this suits mince artists quite well. Not because they want their work to be useful, but because they take great pleasure from their work being unfinished and useable. There is nothing as scary and exciting as when somebody uses the art mince you have made and makes it into something else. And because mince is so versatile, this could be anything really. Spag bol, kottbullar, burgers – you name it. 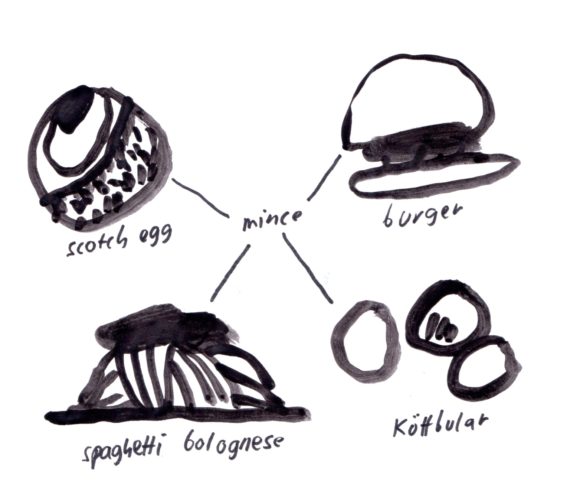 In reality, I don’t think anybody is purely a mince nor a sausage artist. Sausages dominate, but that’s because it’s so hard to trace a history of mince art and find other mince artists. I also need to point out that some artists make sausages but pretend they are making mince. They love talking about ‘community’ and ‘openness’ but won’t even disclose to you how much they earn. Some artists also make bad mince art because they are lazy and their ‘everything is art’ mince is in fact an ego sausage.

At the moment, I feel I’m 70% mince. I get asked all the time if I’m still doing ‘my own work’ because the mince I produce is too mincey: policy making, boxing classes, tie-dyeing, distribution, admin – there are just not enough sausages. It is not displayable. It’s not reproduced or documented, it only appears in the conversations I have. It lives in my Google mince account; in the millions of mince to do lists; in the bits of mince cooked into this text, which I’ve written in the time I have between two meetings.

a-n offered me £160 for this text and I thought maybe it’s a chance to finally write this oral history of the mince and the sausage art down. But I also somehow don’t feel like this should be the end. So if you happen to live in London, meet me on the 12 August, 12pm at St James Supermarket, 148A St James’s Rd, London SE1 5BW and we’ll spend the £160 on a massive picnic in Burgess Park to eat sausages, talk more about mince and hopefully find some better analogies.

Images:
All drawings by Rosalie Schweiker. Courtesy: the artist