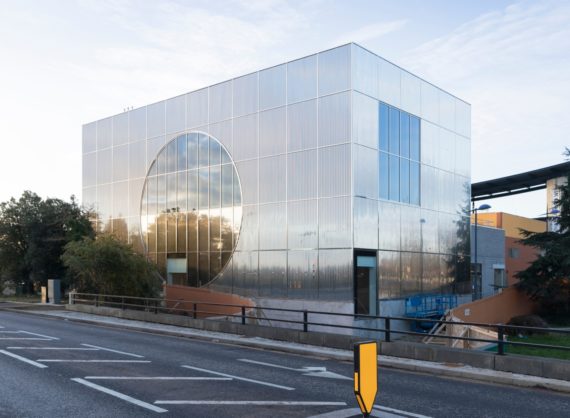 This week sees the reopening of MK Gallery in Milton Keynes following a £12 million development by 6a architects that has more than doubled the site’s exhibition space.

Working with the space’s original structure, which was built in the late 1990s, the expansion features five exhibition galleries with a total of 500 square metres of exhibition space. Located at the top of Midsummer Boulevard, next to Milton Keynes Theatre in the centre of the town, the new development references the area’s original grid layout and the geometries of the adjacent Campbell Park. 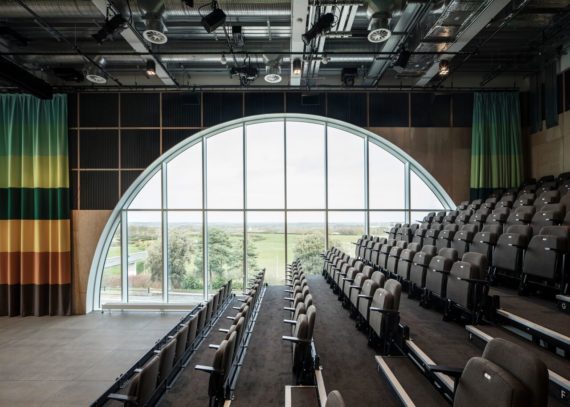 The building also has a large learning and community studio and The Sky Room, a flexible auditorium on the upper floor with 150 retractable seats and views over the local park and countryside.

In addition, artists Gareth Jones and Nils Norman have collaborated with 6a architects and graphic designer Mark El-khatib to create City Club, a sequence of new public spaces in and around the new gallery. This includes the foyer and café, plus a playscape, garden and a new façade for the existing gallery building. 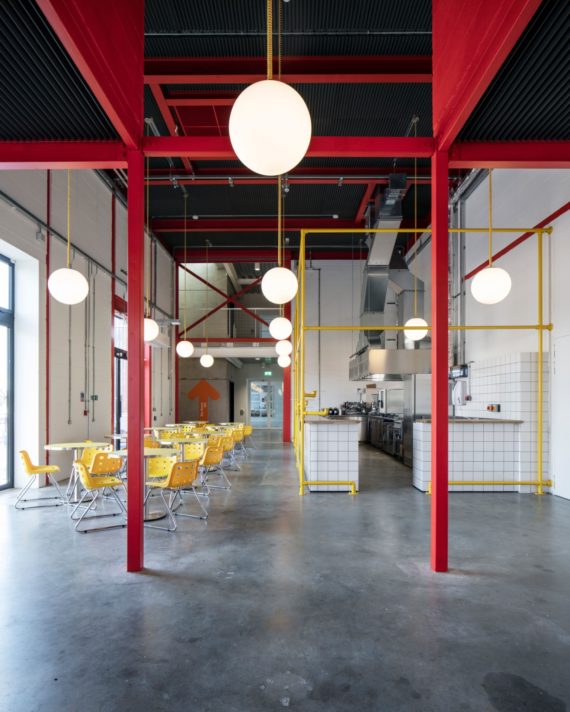 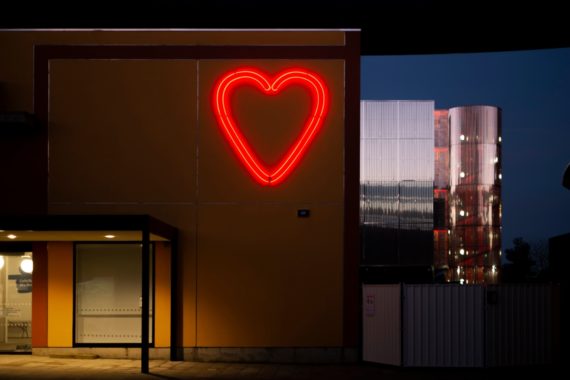 The merging of old and new is in evidence before you even enter the building. The new entrance has a colour scheme that references its original ‘sandstone and terracotta’ facade, whilst the signage uses the first ever logotype for the city – a large red heart.

The gallery spaces themselves are expansive, with high ceilings and parts of the building’s infrastructure, such as piping, exposed. It adds to the industrial feel and sense that this is a space built to evolve.

Anthony Spira, director of MK Gallery, comments: “Our ambition has been to create a building where the art centre and the social spaces come together in what we believe is a rare example of collective authorship across disciplines, where art, architecture and design are interchangeable.” 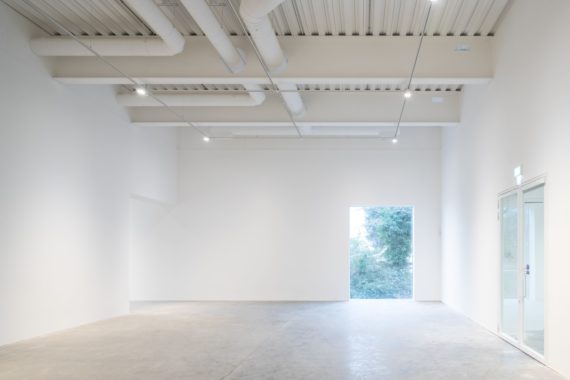 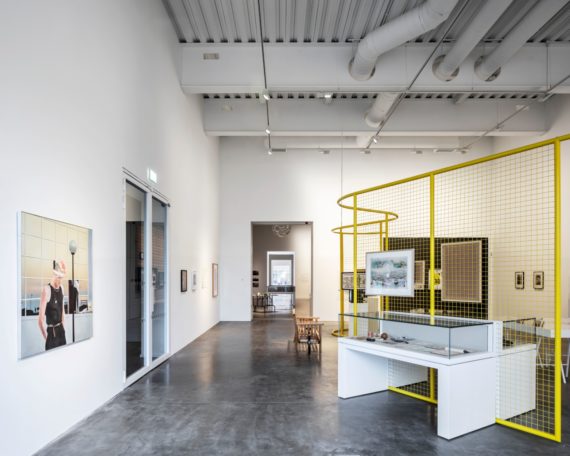 The new MK Gallery’s inaugural exhibition is ‘The Lie of the Land’, a jam-packed group show featuring 85 artists, architects and designers. Constructed like a cabinet of curiosities, it explores changing attitudes towards leisure, culture and landscape over more than 250 years.

Spread across the gallery’s five exhibition spaces, it includes work by well-known contemporary artists such as Yinka Shonibare MBE, Jeremy Deller and Bridget Riley, presented alongside historic contributions from artists and architects such as Thomas Gainsborough, J.M.W Turner and Joseph Paxton.

There are also new commissions including a 20-channel sonic portrait of Milton Keynes by sound artist and composer Caroline Devine, a new film commission working with the community by Ed Webb-Ingall, and an immersive installation by Project Art Works. 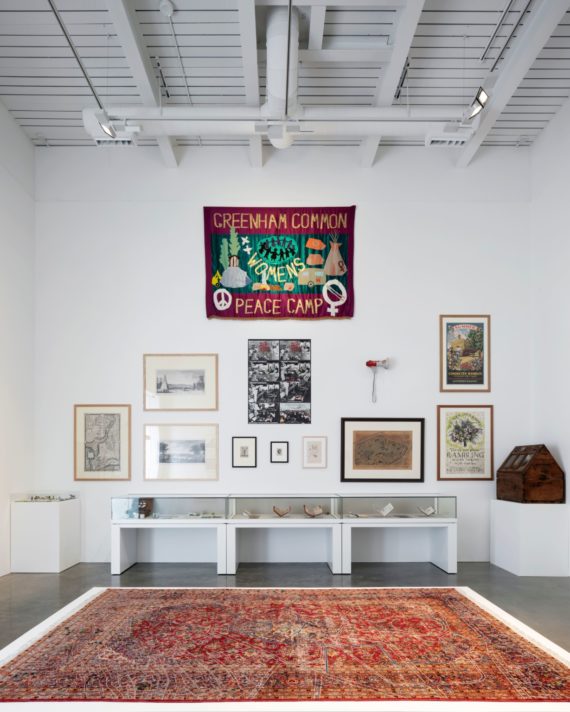 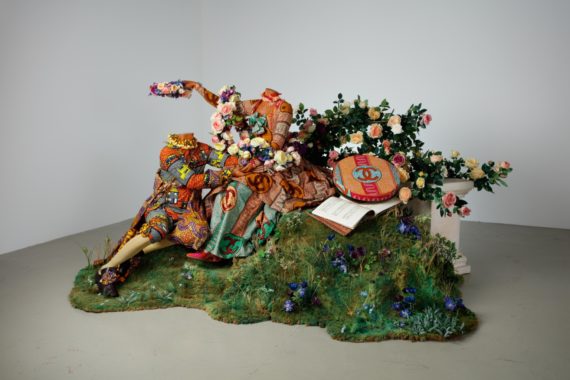 These sit alongside intriguing objects from Milton Keynes history, including a vintage picnic basket, one of the earliest lawnmowers, Gertrude Jekyll‘s gardening boots and a banner from the Greenham Common peace camp.

It is an intriguing approach, and one that on paper runs the risk of becoming slightly chaotic. However Spira and fellow exhibition curators Sam Jacob, Claire Louise Staunton, Fay Blanchard, Tom Emerson, Gareth Jones and Niall Hobhouse, have successfully navigated any potential problems, utilising the new expansive spaces to spectacular effect.

Spira hopes this broad approach will help reach as wide an audience as possible, commenting: “We are proposing a new kind of accessible art centre, which pays tribute to and tells the story of Milton Keynes, fully engaged with playful ways of seeing and definitively open to all.”

The new MK Gallery in Milton Keynes will open to the public on Saturday 16 March 2019. www.mkgallery.org 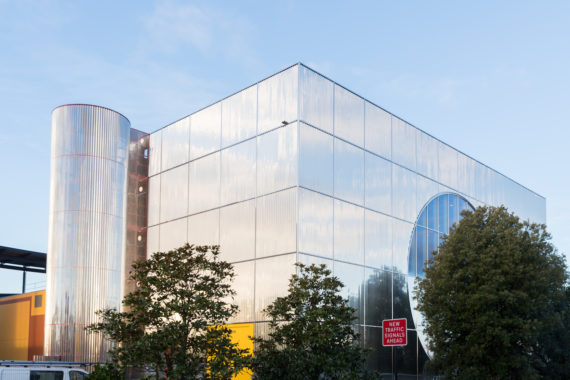 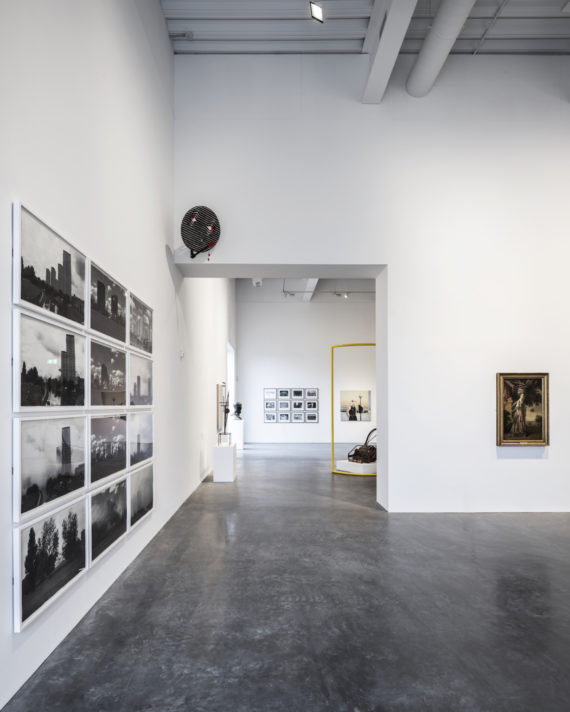