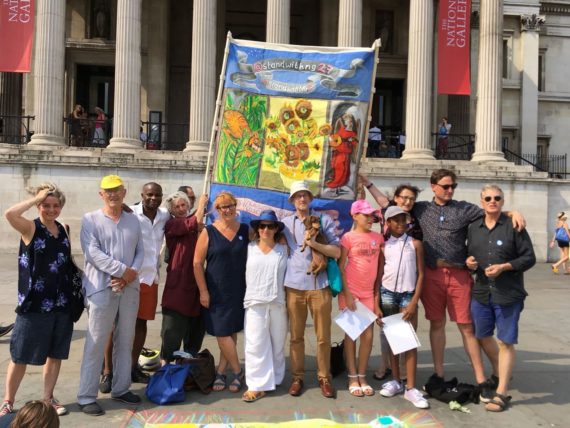 “All for one and one for all.”

I don’t suppose people in the arts often associate themselves with The Three Musketeers, or for that matter unite under what is the unofficial motto of Switzerland, but maybe we should. After all, as most artists will know, a life in the arts is rarely stable.

Inevitably we all try to make our jobs and our incomes as secure as possible but that doesn’t always pay the bills. Rather, for many of us, it rarely if ever gets near to paying the bills – which is why we rely on other work.

One of those other jobs we often turn to is teaching. Of course some of us are teachers by choice rather than default and some of us (myself included) aren’t visual artists at all. I’m an actor, but that’s another story, though with the same result – I teach in the art world to bolster an insecure income.

So it really doesn’t help when one source of income which has been secure – for 24 years in my case – suddenly ups and leaves you. This is one of the reasons why 27 of us are taking the National Gallery to tribunal.

The NG27, as we are now known, is a group of artists, lecturers and educators who have worked regularly for the National Gallery for decades. Some of us for 10 years or so, others for over 20, and at least one for well over 40 years.

And while we worked regularly, the National Gallery relied on us to deliver their education programme as part of a team, paid through payroll and taxed at source – all the indications were (and there are more) that we were indeed employees. This is the status we hope will be recognised by the tribunal; the National Gallery insists we were freelance.

Last October we were dismissed with the offer of ‘more secure’ jobs, although these jobs were few in number and with greatly reduced salary and terms. This is why we’re making a stand.

We’re used to hearing about this kind of employment practice in the private sector, but this is a public body – is this really how we want a national institution to treat its staff? Is this how public money should be spent? As it says on our CrowdJustice page: ‘We are standing up for fair treatment for staff in the arts and to protect the teaching expertise at the heart of our museums.’

The implications of this are nationwide, and not just for museums. The case is more important than how the lives of the NG27 have been affected – we are taking a stand against the exploitation of ‘bogus’ self-employment in the arts.

We believe in the importance of arts education and that artists and educators deserve to be valued and treated fairly. But it is a complex case, as witnessed by the fact that the tribunal, which begins on 26 November 2018, has been allocated eight days by the judge – which is why we’re currently involved in a crowdfunding campaign.

The campaign is not just about us. The next generation, and generations of artists and educators should be treated better, and should not be subjected to the gig economy mentality. So please stand with us, and we’ll stand for them – “All for one and one for all”.

Find StandwithNG27 on Twitter and Instagram for regular updates, including free events for supporters of the campaign.
www.crowdjustice.com/case/nationalgalleryeducators

Image:
Members of the NG27 outside the National Gallery. Courtesy: NG27

Richard Stemp is an actor and freelance museums lecturer, art historian and author.