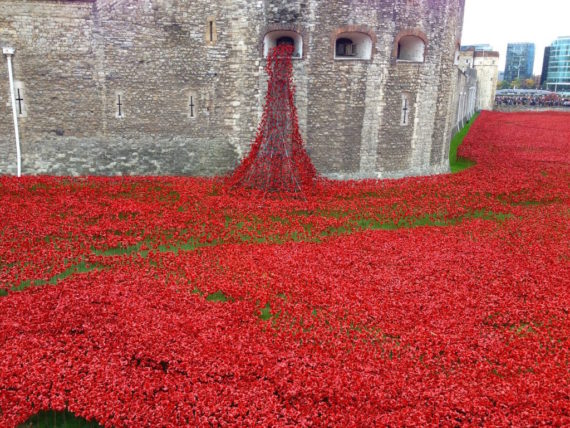 Poppies sculptures to be installed in London and Manchester as part of commemorations marking 100 years since the Armistice The original installation of Poppies: Blood Swept Lands and Seas of Red was at the Tower of London in 2014, marking the centenary of the outbreak of the first world war. The work was made up of 888,246 ceramic poppies – one for every British or colonial life lost at the front.

Since then, it has been split into two separate works entitled Wave and Weeping Window, touring the UK to various venues. This weekend, the finale of the tour will see it going on display at the Imperial War Museums in London and Manchester, where it will remain until 18 November and 25 November respectively.

Diane Lees, the director general of IWM, said: “They are such a phenomenon. I cannot think of another example where the public and nation have got behind a single art installation in that way. So, it is not surprising that there is interest, particularly from the Commonwealth countries, to share something of that narrative.”

The original concept for the work was by ceramic artist Paul Cummins and designer Tom Piper. Cummins told the Guardian that the public’s reaction had been “incredible, something quite beyond what I ever expected, and it has been a journey for myself seeing people’s interactions with Wave and Weeping Window at the various locations around the UK”.

Art dealer Mary Boone pleads guilty to tax evasion charges Owner of two galleries in New York could face up to three years in prison after making several false claims on her 2012 federal income tax returns. She said her business had made losses of $52,000 the previous year, whilst in reality it had made a profit of $3.7 million. She also claimed that $1.6m of personal expenses were business deductions.

Boone told the New York Times: “This is the worst day of my life. I have learned from my mistake and I am working very hard to put it behind me.” Geoffrey S. Berman, the United States attorney in Manhattan said in a statement that “Boone has learned, tax laws are not abstract.”

Boone has agreed to pay $3 million to the Internal Revenue Service, which is the amount she avoided paying by filing the fraudulent individual and corporate tax returns for 2009, 2010, and 2011.

Labour Party pledges to put creativity “back at the heart of the school curriculum” The party has said it will provide an additional £160m a year for cultural activities in primary schools, whilst also reviewing the EBacc (English Baccalaureate) to ensure that the arts are not removed from secondary education. The party added that it plans to launch a creative careers advice campaign.

Tom Watson, Labour’s shadow culture secretary, said: “Every child, no matter what their background, should be able to access the wonder and enjoyment that arts and creative endeavours bring.”

Swedish museum Moderna Museet returns Kokoschka work to Jewish dealer’s heirs Alfred Flechtheim was one of the best-known dealers in Europe before he fled Nazi Germany in 1933. He collected a number of works by high-profile artists, including Pablo Picasso, whilst also representing Paul Klee, George Grosz and Max Beckmann. After he died in London in 1937, his Dusseldorf gallery was liquidated and his private collection sold.

The 1910 painting is a portrait of Marquis Joseph de Montesquiou-Fezensac and was sold by Flechtheim’s former employee, Alex Vömel, who was a member of the Nazi party.

Moderna Museet director Daniel Birnbaum said: “It is of utter importance to the Swedish government as well as for us in the museum that there are no works that have a problematic provenance. We are happy and relieved the Kokoschka painting now returns to its true owner.”

New York gallery Greenspon cancels show by alleged Neo-Nazi Boyd Rice The artist and musician known for being a Nazi sympathiser and fascist has also collaborated with white supremacists. Amy Greenspon, who owns the gallery, told Artforum that the controversy was focused on Rice’s persona rather than the works set to be displayed.

In a statement, Greenspon said: “It has been brought to my attention the incendiary impact of [Rice’s] work. I have learned more about the artist’s work and past, and conclude that I am not comfortable supporting his project at this time.”