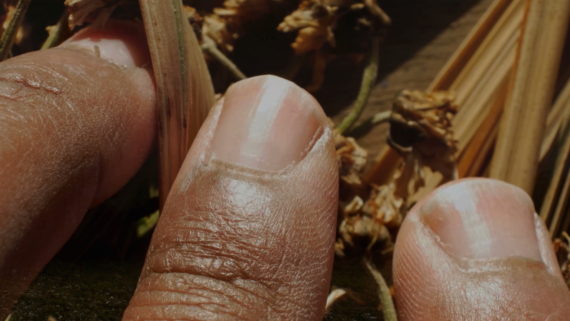 Keith Piper is an artist and founder member in the 1980s of the groundbreaking BLK Art Group, working alongside Eddie Chambers, Marlene Smith and Donald Rodney (1961-1998).

In the years since, Piper’s work has encompassed painting, digital media, video, sculpture, print-making and installation, and he has maintained a consistent interest in political and social ideas.

Piper has exhibited widely, both in the UK and internationally, with key exhibitions including ‘Past Imperfect, Future Tense’ (The Black Art Gallery, London, 1984), ‘Tradewinds’ (Merseyside Maritime Museum, Liverpool, 1992), ‘Relocating the Remains’ (New Museum, New York, 1998) and ‘A Future Museum of the Present‘ (113 Voorstraat, Dordrecht, Holland, 2010). He is an associate professor/reader in fine art and digital media at Middlesex University.

His most recent work, Unearthing the Banker’s Bones, incorporates video, objects and paintings, and was produced by Bluecoat, Liverpool and Iniva for the Arts Council Collection’s 70th anniversary commissions. After an initial run in Liverpool, the work is currently on show at New Art Exchange, Nottingham, until 11 June 2017.

Some of Piper’s early pieces are also included in ‘The Place Is Here’, a survey of work produced within the British Black Arts Movement in the 1980s, which continues at Nottingham Contemporary until 30 April 2017. 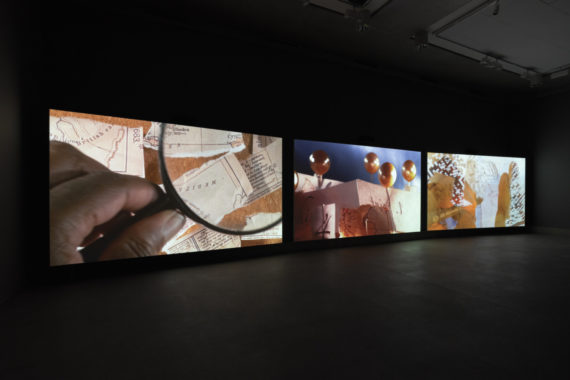 Unearthing The Banker’s Bones seems to be a kind of archaeological dig into our own culture and civilisation…
It’s imagining what might remain of us, and speculating on how those remains might be read from some point in the future. One of the starting points for this work was a friend of mine, who is an Egyptologist. She was looking at the scarce remains of the lives of what we might call the working class of Ancient Egypt, the kind of people who would have been pressed into service to build the pyramids rather than the kings they were built for. We have this idea of Ancient Egypt based mainly on the treasures of the tombs, but what were the lives of ordinary people like in a society like that? It was a whole way of life that had disappeared from the historical record, which instead focused on the incredible wealth locked away in the pyramids. I wanted to ask what that tells us about the way a society is put together. That’s the question I’ve been interested in asking with ‘Unearthing The Banker’s Bones’: what will our own society’s relics look like from a future perspective?

You’ve talked about the author Octavia Butler as someone whose ideas are important for this new work.
Yes, Octavia Butler and Samuel R Delany are two key science-fiction writers for me. Octavia Butler comes into Unearthing The Banker’s Bones through her Parable of the Talents, a very scary and almost predictive piece of writing published in 1998. Reading her book now, in the context of Donald Trump – the whole ‘Make America Great Again’ thing, the rise of this right-wing demagogue – there’s a lot of very specific resonance in her writing at the moment. So I’m very interested in those kinds of ideas and writers. ‘Unearthing The Banker’s Bones’ also brings in Mary Shelley, whose The Last Man, published in 1826, was one of the first science-fiction novels, and also one of the first to imagine a post-human, post-apocalyptic landscape, where a single survivor has to navigate his way beyond the end of human civilisation. 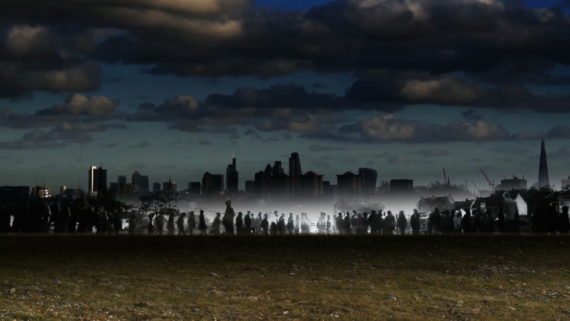 Invoking Ancient Egypt and science fiction obviously raises the question of how this work relates to Afrofuturism?
Well, Afrofuturism is a very rich and interesting field, but I wouldn’t call myself an Afrofuturist. Obviously the Sun Ra stuff like [the film] Space is the Place, the idea of the Ancient Egyptians being connected to another astral civilisation, George Clinton and Parliament/Funkadelic with the whole Mothership Connection… there’s a lot of really interesting speculative work that has been made around those ideas. But I would tend to align myself more with a Black futurism than an Afrofuturism, because I see ‘black’ as a political rather than an ethnic term. Afrofuturism often locates itself in relation to a kind of cultural nationalism, through its interest in the reconfiguration of African signs and symbols. It’s very interesting work, and very important work, but not really the angle I’m coming at things from.

Unearthing The Banker’s Bones seems to play out as a blend of fiction and essay.
The central voice-over in the film is essentially research-driven, so the voice is addressing themes that were found in my research process. I’m very interested in the work of someone like Chris Marker, who uses that same kind of essay-voice in some of his work. And anyone who picks up a camera and even considers making a three-screen video installation like this one is immediately thinking about John Akomfrah, who has brought such elegance to that form. I’m interested in all of the things you can do with this kind of film-essay documentary form, mainly because of its flexibility. You can address things very obliquely and poetically, or very directly.

You were involved with the British Black Arts Movement, which is currently being surveyed in ‘The Place Is Here’ at Nottingham Contemporary. It includes some of your own early work…
‘The Place Is Here’ is a very important and inspiring exhibition but it can slightly gloss over just how contested the idea of the Black Arts Movement was in the 1980s; it was always a lot more dispersed and contested than the idea of a single, unified art-historical movement suggests. The history of the Black Art Gallery [in Finsbury Park, London] is interesting, because it was always a very particularly contested space. The way it developed crystallised a lot of the fiercest arguments of the time. It was originally run by a group of cultural nationalists, for whom the word black meant ‘of African descent’, an ethnic rather than political term. That space was then gradually taken over by younger artists, who were part of a 1980s movement towards using black as a broader, political term, reflected in Marlene Smith becoming its director towards the end.

That history makes some of the battle lines of that time very clear. But the re-staged Radical Black Art Convention at Nottingham Contemporary earlier this year was very interesting, too, because those battle lines were still quite sharply drawn and the convention ended in a huge row. I mean, it’s a very healthy row over important ideas and issues, but the question today, as in 1984, is whether we’re equipped to harness the energy of these arguments to make other things happen. 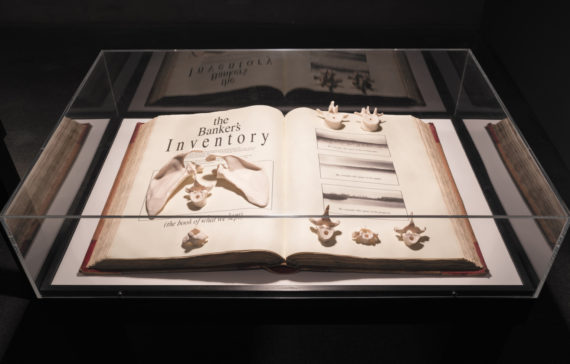 History seems to be another key theme in this new exhibition, with the four paintings referencing works by Géricault and Gustave Courbet.
Well, my history paintings don’t have much of a formal or aesthetic dimension – maybe something closer to an anti-aesthetic, because they’re deliberately very rough and physical in their execution. At the Bluecoat they were shown in a way that suggested work in progress, but at New Art Exchange they’re shown in the entrance area, like banners high up on the walls. But the main aspect is the use of history painting to look at the present through a lens not too different from the science-fiction one. The paintings are in progress and unresolved because history is always in progress and unresolved, with resonances that change over time.

A painting like Théodore Géricault‘s The Raft of the Medusa (1819) is very research-based, in a quite contemporary way, so there’s a lot of archive material about how he researched that work, all the preparatory drawings and studies he did before he made the actual painting. It also has a very obvious contemporary resonance in its portrayal of a real event that saw some of his own society’s most marginalised and hyper-exploited members cast adrift on the sea. It’s not too surprising that The Raft of the Medusa has become something of an emblem for the situation of refugees being abandoned to drown in the Mediterranean today.

That interest in political and social questions has obviously been a strong thread through most of your own work to date, so that early political context you worked in must have been pretty formative.
Yes, absolutely. The fact that I can use the space of a creative practice to add to conversations around the social and political is still very important to me. So in the sense that I’m not using the space of my creative practice to talk about the practice itself, or formal questions, and that I understand and appreciate how it can be used as part of a wider conversation about something outside itself, yes, I remain there.

‘Unearthing the Banker’s Bones’ continues at New Art Exchange, Nottingham until 11 June 2017. Keith Piper will be giving a talk at Nottingham Trent University on 26 April 2017, 6-7.30pm, free but booking required 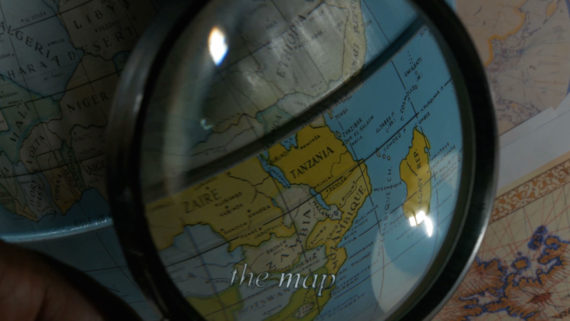 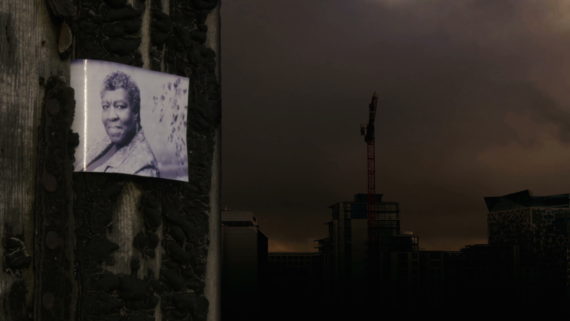