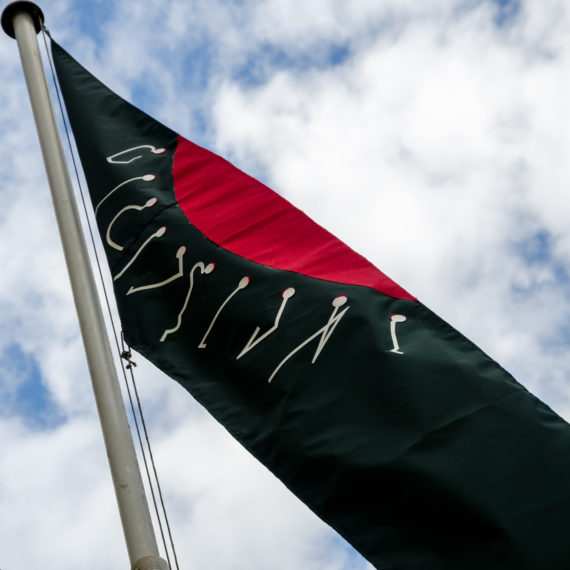 Sally Stenton is one of 50 artists who took part in the 2017-2018 programme of Artists Access to Art Colleges (AA2A).

A recent graduate of Cambridge School of Art at Anglia Ruskin University, Stenton returned to her Alma Mater to spend a considered period of time using the art school’s 3D workshop, printroom, and library, as well as taking inspiration from the site and context itself.

Taking place at art institutions throughout the UK, AA2A provides artists with 100 hours of access to art school facilities, with artists applying for a placement at the school of their choice. Founded in 1994 through research pilots, the full AA2A project has been running since 1999.

For its current programme, 11 art schools are inviting applications from artists, with a number of different deadlines coming up in September.

While most artists apply to use a particular technical workshop or facility, Stenton’s own placement also involved exploring the situational context of the art school and its relationship to a neighboring forensic science faculty building.

Stenton has a conceptual and collaborative practice that often takes an interdisciplinary approach to investigating ideas.

In 2016 she received the Cambridge Festival of Ideas (University of Cambridge) Award for Stone Paper Cloud, a collaboration with Archaeologist Dr Augusta McMahon and Computer Scientist Professor Ann Copestake, which created a walk linking Cambridge with Aleppo and explored ideas around old and new technology.

In collaboration with artist Caroline Wendling, in 2017 she created An Invitation to Travel, a series of three performance-based walks. 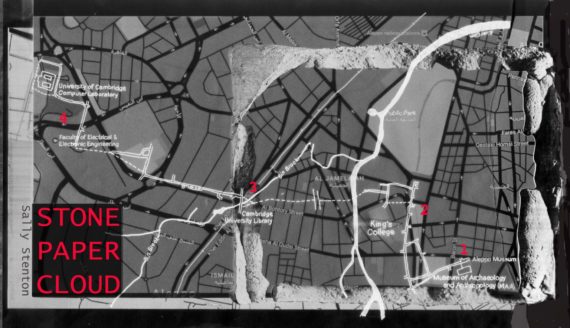 I’m interested in the approach you have taken to your AA2A placement, which seems to be different from the way most of the residencies work.
I really wanted a period of experimentation so I could give myself that freedom to really explore where I was going. I came up with a general title that I felt would be a good reference point for me, which was Tripping over Digital Objects. There was one particular corridor, a long white corridor [leading to] where Forensic Science was based. I was fascinated by Forensic Science being adjacent to the school of art. Conceptually I thought there was quite an interesting connection and I arranged to meet up with one of the Forensic Science lecturers.

The Forensic Corridor – as it came to be known – was a passageway between the school of art and the new science building, so that became my focus, this journey between. I was also experimenting with installing tiny photographs [in the corridor] that I’d cut out, that looked three dimensional. They were from objects that I’d made previously, photographed, cut out, put in the space and photographed again. What I wanted to do with the plasma cutter in the art school’s 3D workshop was to make the shapes from the photographs back into a 3D metal form. 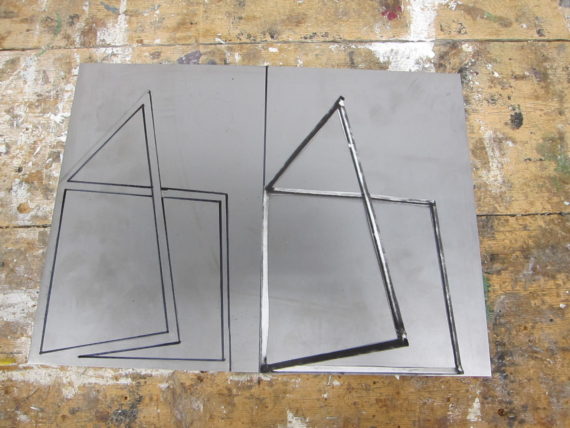 Was there any interaction between the AA2A residency artists at Anglia Ruskin?
Although we weren’t all in on the same days, we put quite a lot of importance into making sure that we did meet up. We had a few sessions where we actually got together in order to discuss our work. It felt really supportive and it was so good to have that contact. Liz Jackson had a very clear idea for her project – she was in the print room doing screen printing to produce work for an exhibition and it was great to watch her process of working.

Melissa Murray was mainly in the 3D workshop. She’s a sculptor and was interested in how she could engage people to participate more in her sculpture. She was working out what that might mean and producing pieces that could form kits that she could then take to people, for them to experiment with; sculptural objects that you could put together in different formations. Chris Meigh-Andrews was nomadic like me, he also connected with people from outside the art department [in the Computing and Technology Department], on the technical side in order to assist him [with drone technology].

So was this sense of community an important part of your placement?
It felt like that as AA2A artists we were really valued by the school of art and we were made to feel very welcome and included in anything that was going on that might be of interest to us. We also did a presentation to all the students at the beginning and I was quite involved going around the studios and meeting people – or having conversations with people I passed on the corridor. I’d been missing not having those kinds of chance encounters where you get to talk about your artwork in a way that you wouldn’t in other settings. 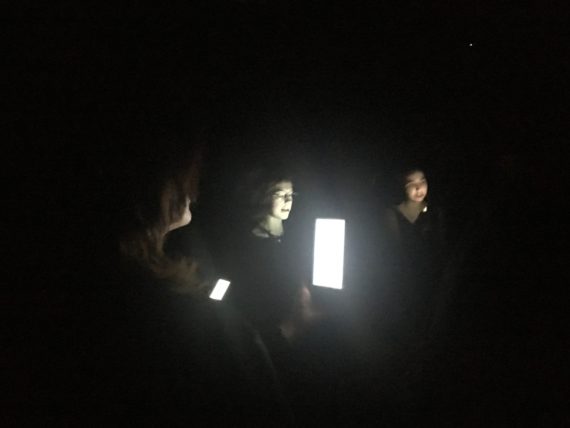 How would you describe the outcome of your AA2A placement?
I took part in two exhibitions towards the end of the residency. The first for Cambridge Science Festival explored the walk between art and science through a video installation and was developed with neuro-scientist Marty Fiati.

I was also invited to re-enact a performance piece entitled The Listening Stick for an exhibition in the Ruskin Gallery called ‘Liquid Land’. This was a great opportunity to engage students, both as participants and performers.

By doing a physical walk from one place to another you are doing a mental walk at the same time – going from art to science seemed like the simplest representation of that idea. The residency has enabled me to develop that thinking about walking and what that means in order to do the next piece. 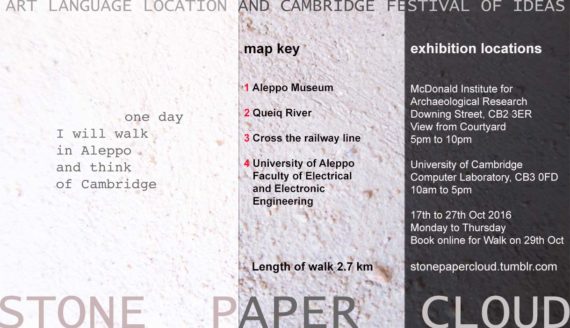 You mentioned that you are currently developing work that was influenced by your AA2A experiences, can you tell me about your future plans?
One of my next projects is for an exhibition in October called ‘The Archive and the Contested Landscape’, which is part of the Festival of Ideas. The exhibition is going to be in Cambridge and in Basra, Iraq [and] I’m proposing two simultaneous circular nighttime walks in both cities called Sharing the Moon. It’s a development from my 2016 work Stone Paper Cloud, which was two overlaid walks, one in Cambridge and one in Aleppo.

For that project I took a digital tablet and I did a search for a bronze-age tablet. The search came up with a number of images and the one that struck me was one that looked almost like a digital tablet, it had a clay envelope – a casing around it. I found out that it was meant to be in the Aleppo National Museum, but that had been emptied and so the work is based on this idea of the missing tablet, the casualty of war.

Fundamental to that was the idea that when we look on the screen at what is happening in a war-torn country, the screen becomes like bullet-proof glass; we can see it happening, but we’re protected from it and so we feel safe. So the whole project became about that disconnect. It’s to do with how we relate to the world through the screen, which comes back to my Tripping over Digital Objects AA2A research, about how human bodies inhabit the world when the mind is absorbed in the screen. I am exploring the physical act of walking but also incorporating a digital trace.

Apply for one of this year’s AA2A placements at 11 universities across England. Deadline to apply varies depending on the university. aa2a.biz/pages/advert2019