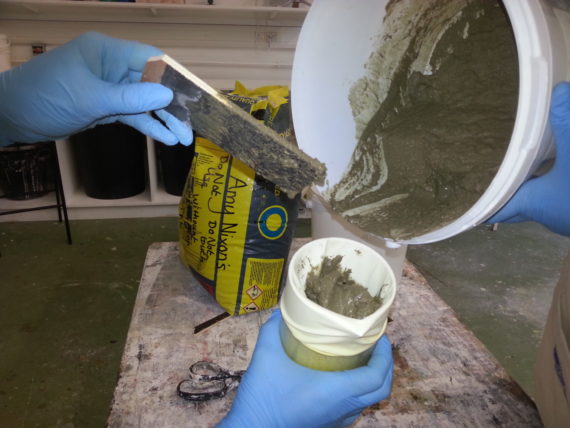 In the meantime, while looking for the right clothing I wished to portray within my animated film. I started looking into the history of upset, sin and depressive states. Within this research I found the belief of Hell, and to take one’s own life would be considered a sin within the 10 Commandments one of which being “do not kill”, as murder of oneself is considered murder nonetheless, within modern day Christianity. Within one of the ancient religions I looked into, it was believed that once you enter the underworld (evolved into hell as known today) you would carry every one of your sins behind you for eternity as iron chains.

After watching a video online, I decided to create a representation of this, by creating concrete hands to carry chains.

After I bought what I thought was concrete, and got it back to the workshop. I realised that what I had actually bought was mortar.

I decided to carry on anyway. It was looking good, until I realised I put too much water within the mix, so once it had dried, I found it simply crumbled.

I decided after seeing the outcome, to experiment by putting PVA glue within the mix. I’m currently still waiting for it to dry, more than 24 hours later.

My first idea for one of my animations, was a dance with a shadow or a ghost of the memory of the struggles within myself as a little girl.

The idea I had to create this, was to produce the animation image by image, to then project the animated drawing of my echoed youth and film myself dancing alongside with it.

I decided to do this first through computer programs, however I found as I am left-handed and use my mouse with my right hand, creating an accurate image through photo shop was increasingly difficult.

I decided to then look for a free computerised program to use. However what I found was nothing could layer the images on top of each-other, this created an inconsistency while trying to match the imagery, I found it hard to remember the exact positioning I used for the drawings.

I decided to then draw it by hand, photographing stages and rubbing out progress to slowly move the images to create an animation digitally.

To get the anatomical accuracy I wished for, I decided to film myself within the movements of the child, so I could more easily create a proportionately realistic animation.

However after filming myself. I decided after watching back the film. It would be a lot easier to do everything basically the opposite way around. To film me dancing with myself first, then fill in the gaps by printing out the film to draw the animation separately on top, to then scan back in to the computer and animate it.