You can perhaps look for too many points of reference in a piece, still it’s an interesting fact that the Rink Ballroom was open for exactly the same amount of years as I have been on this planet. Either I am very old or my impression of its lifespan is effected not so much by the building or even the people I have met who passed through it, but by its place in a wider world context.

It began life as a roller rink for pleasant Sunday excursions and local pageants, a place for Victorian families to loosen up a bit. Pretty soon it was billeting first world war soldiers and the skaters were soon up to their knees in Belgian mud and futility. Bit of a break for general societal re-ordering and the demise of the servant class. Votes for all but no real change in the Great British class structure. Then another world war; the disillusioned now given a more noble cause to fight for. You really would be pissed off if you had been unlucky enough to have to fight in both of them though. How easy us baby boomers have had it in that respect.

Moving swiftly on, post war you actually get a health service, a dwindling empire and a little hope on the horizon for better days ahead (even though the majority are still in comparative post war poverty). You make it through the fifties into a generational revolution where all previous values are turned on their head and for a brief moment love and peace prevail as a plausible concept at least. You have to say that’s quite an accelerated burst of history going on there. From servant to soldier to master of your own destiny.

By comparison what has taken place in my lifetime? On the surface technological development has been exponential. We brits have been blessed with avoiding compulsory war. You can of course still follow it as a career route. We have seen the rise of consumerism as god, and the idea that year on year growth is the only possible model for mankind; so we have obligingly consumed as much as we can. I was lucky enough to come from a back street in Leeds, go to sixth form and then art college without too much pressure to conform to previous employment or obvious class models . I did my own thing. I am a product of relative societal affluence and freedom. Even when I hadn’t a bean to my name I felt positive about the future. There was a safety net of sorts.

As far as I can see the biggest change in my lifetime has been the explosion of information and the challenge of what to do with it all. We exploded a communications bomb and got buried in data fallout. Our ability to evolve as a bunch of people who can all get on together doesn’t seem to be getting anywhere fast though. We just have more and more background noise. Jaw, jaw is only any use if you speak the same language. We are still somewhat in need of metaphysical interpreters.

So I look at the sad black and white photo of the Rink Ballroom with its windows boarded up. It’s difficult to appreciate the journey it has been on. I talk to the people who made the building come alive and I am impressed by the diversity of their lives, but it is my imagination powered by the background of documentation from earlier times that puts it into context. It is actually quite annoying that early BBC television broadcast tapes were typically erased for re-use, but in another way that lack of total documentation allows other forms of reconstruction.

This piece is about how a grain of sand can make a pearl; about making magic from the not obviously magic. It requires that you see it through both a macro lens and a wide angle. My own life seems to have been uneventful in comparison, but maybe future generations will be amazed by the fundamental shifts in world order and perception my generation have (albeit grudgingly) had to adapt to. 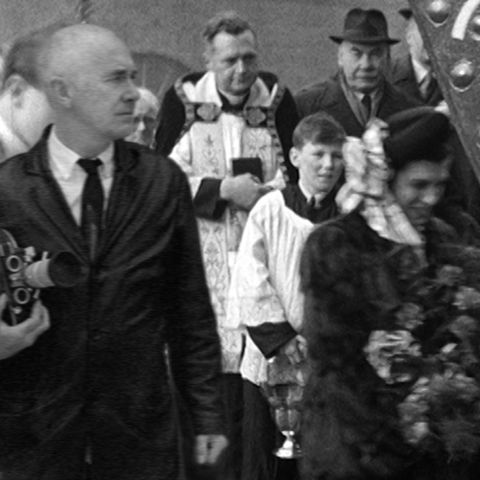 ONE MONTH TO GO

Four weeks and counting to my show. I had a blitz over the last month and have ironed out what goes where and, most importantly (bar tweaks to the technicals like colour grading and audio balancing) the content for the various video pieces is all complete. I suppose I always knew I would be flying close to the deadline, but by virtually living and breathing this piece for the past month I have wrestled it into shape.

There was a point the other morning where I was just about to squirt shaving gel onto my toothbrush. It was a close thing. I will check back into the real world shortly.

Typically my daily routine involves making cardboard plectrums mornings and late evenings, out of the content of whatever is left to go out into the recycle bin. I hardly give it a second thought. Will I miss the routines this piece has imposed on me? Hmmm.. I’m sure I will get over working 7 days a week (including bank holidays) but no doubt something else will replace it in due course.

Getting so close to the show’s opening has made me reflect on its shape. When I first imagined this piece it was going to be a number of mute video projections in a darkened space with one audio track. Over 18 months it has evolved into a much bigger beast. Six unique video screen narratives, each with their own audio, plus a projected video to be viewed in its own discreet viewing area. Added to this, I now have two glass cabinets which include such things as a trumpet, a box of coal, my Marion doll, an electric guitar; the aforementioned plectrums applied to the inside of a display cabinet… a Lambretta wrapped in organza…two banners on which is written the back story of a constructed character, a gramophone which will play the now complete and mixed bigband song I wrote, my 1950s typewriter on a plinth which invites contributions to the narrative echoes on the wall that will be dotted around the gallery…. various framed prints and a 9 meter length of 8cm square photographs that will traverse the walls in a way that invites the viewer to consider the powerful tool that is the frame of authorship .

In short – there is sooooooo much more here than I initially envisaged. It has been a journey and a half for me and I am now hoping that some of what I intend will transmit to the visitor and that perhaps other unknowns will pop up along the way.

I have had two vinyl records pressed of my song (I am hoping nobody pinches them from the gallery) and a short run of vinyl cds. I am really pleased with these – they look like smaller versions of the real thing… grooves and all. I did worry that the making of the musical element of this piece was taking up a disproportionate amount of time and effort, but now I have it in my hands as an actual real thing it seems worth it. In fact it was never just about the song itself but more about the process of working through the idea and gleaning experiences along the way that I couldn’t have obtained any other way.

Sifting though some of the photography, juxtaposing my own photographs alongside still frames I have taken from archive Hartlepool shipping company films, has been an archaeological journey of magic. Blowing up details of pics I took a year ago, I have discovered things I didn’t initially realise were there. In the same way, taking still frames out of 70 year old film stock gives you the feeling of being the first person to examine them in such detail. Enhancing and selecting has allowed me to bring alive material which I am sure has never been seen before. Digging through the past, sifting it and reforming it, provides a unique medium to model something that hopefully has a relevance to the world of today.

I knew there was a reason I enjoyed museums so much when I was a kid.