Having set a precedent with the Hartbeat’s drum kit last week, I am now on a roll with Kip Heron’s trumpet. Finally I have permission to take it out of the glass case in Hartlepool museum and spend an afternoon with the little instrument of joy.

As a child I always wanted to play the trumpet, but my school only had one and some older boy apparently had loan of it for the duration, so my aspiration was never fulfilled. Didn’t really consider it at the time, but I’m thinking now that the trumpet was a forerunner to the electric guitar in the ‘sexy instrument’ stakes. Singular and difficult to ignore, it could be considered the centre forward of my fab fantasy musical squad.

People still recall Kip in Hartlepool; he is one of their musical legends even though (or possibly because) he didn’t travel far afield.

The trouble with recall going back to the 50’s or beyond is it can get a little sketchy. Right at the beginning of this project I met a lady whose husband played in Kip Heron’s band. At that time his name didn’t mean anything to me; it was only later, after many more mentions, that I realised Kip was a bit of guy. People in their eighties and nineties understandably project backwards with a high degree of selectivity and a little grease on the lens. Some details are clear but often the same things are repeated and it can be difficult to get a more complex picture. So it was a real coup to discover that someone at the museum had the email address of Kip Heron’s daughter.

I don’t know why but I always assume that generations have remained geographically faithful to this insular town. Sending off emails to Jacky I wasn’t hopeful of a reply, but amazingly, having beaten the spam filter (you never know with an address like [email protected]) two days later I had a response. Seems Jacky in fact lives in Chester but, as serendipity would have it, they are due to holiday in Seahouses…further north and up the coast. Whenever they get up north apparently they go visit the trumpet.

I like that – a bit of a pilgrimage – a musical instrument as a vessel of history; a tangible extension of a loved one.

I wonder why his sibling didn’t take it up. I’ll ask her; tho I could just as well ask the same question of myself. None of my three children play music (except via iplayer ha ha) even though music has been central to my own life. I am unable to answer why myself. We’ll see if she can…

Piecing together tangential links and following ad hoc leads had me pondering the ‘six degrees of separation’ theory; the idea that everyone is, on average, only six steps away from an introduction to another person on earth. I’ve written about my Rink photo of the Manfred Mann group previously and also mentioned Ray Minhinnett (son of Hartlepool made good as a renowned blues guitarist). I mentioned to him that I will be interviewing the Manfred’s in November and he tell me he knows them well. Connection number one. Later this week, at a friend’s mother’s funeral, I am chatting to my ex-drummer’s son Dominic. He tells me that his band, the Narrators have just played a blues festival in Lancashire. We chat a bit more and I tell Dominic about the Rink project. Turns out the Manfred’s were playing the same festival on the same night as Dom’s band…it feels a bit like ‘step on board a train to anywhere – this train departs to all stations!’

Been logging my archive footage too – in particular one film called ‘Holidays at Home’ made just after world war two. A park full of people ballroom dancing on the open grass…children…servicemen and servicewomen in various uniforms; teenage girls; hopeful boys; dancing into night…laughing into the night. What amazing times; somewhat surreal and yet not that long ago; and yet long ago…and my video installation somehow needs to capture all of this mystery whilst being a coherent whole in its own right. Dancing into the night. 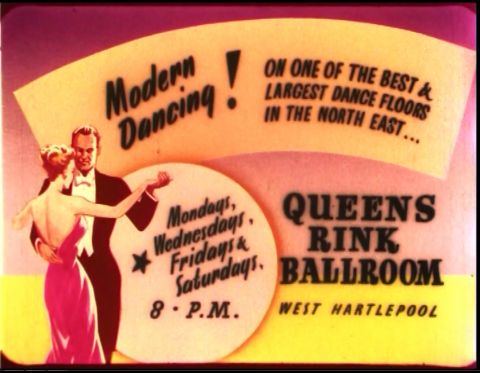