Today saw the world premier of my film: ‘Ness of Brodgar 5th edit – work in progress’, which is around half the intended length of the film. It was shown on site, projected on to the wall of the barn where the wheelbarrows are stored.  There were some good reactions, including a few laughs. The audience was so big that a second showing was necessary at the end of the day. Having watch the film through twice I can see they there are a few tweaks necessary.  Once they are done this latest version will go on Vimeo, alongside the previous edits. 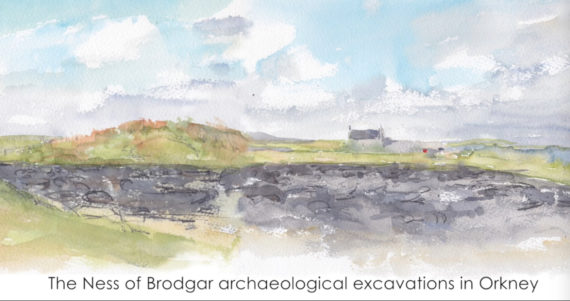 For me the occasion was probably as nerve-racking as a gallery preview – but the location was perfect.  It would be good to recreate this open air cinema next year, when I hope the film will be complete. 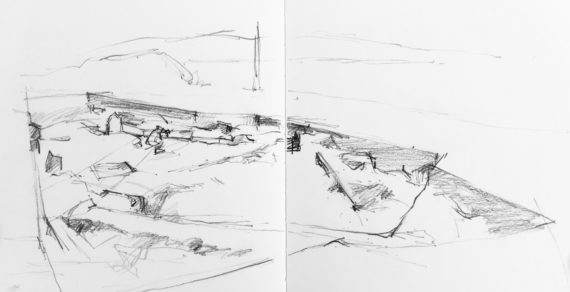 Setting up the film show took up most of my day, but I managed one drawing in the afternoon of Trench T from my previously established view point. The plan is to show a series of drawings from the same place over time.

Last year and early this season I followed the history of Trench Y, which was meant to be a quick excavation to find the wall surrounding the Ness of Brodgar. They didn’t find the wall – just a few bits of archaeology including one or two nice finds and a hearth.

Today, sitting in a (relatively) gentle breeze beside Trench Y, I watched around twenty people shovelling the spoil heaps back into the trench.  This is the absolute final phase of its existence – although there is a layer of black plastic covering the archaeology, just in case someone ever wants to reinvestigate the site. 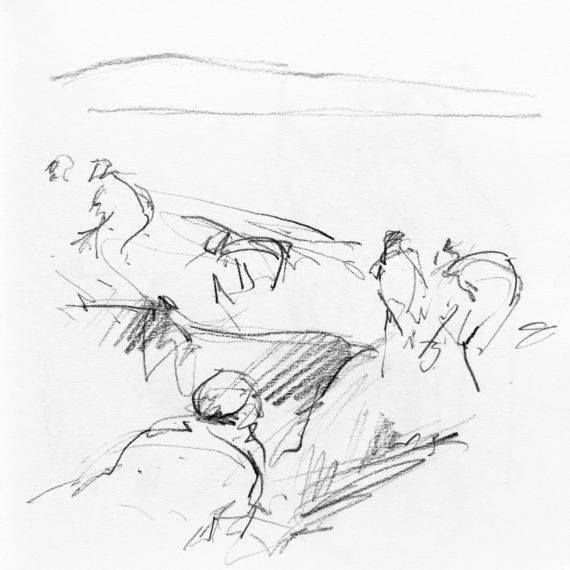 Despite the number of people working, it was taking a long time. This had been a deep trench.  The mound already backfilling the end near the water was fairly quickly levelled – but the top of the trench, a metre deep remained. 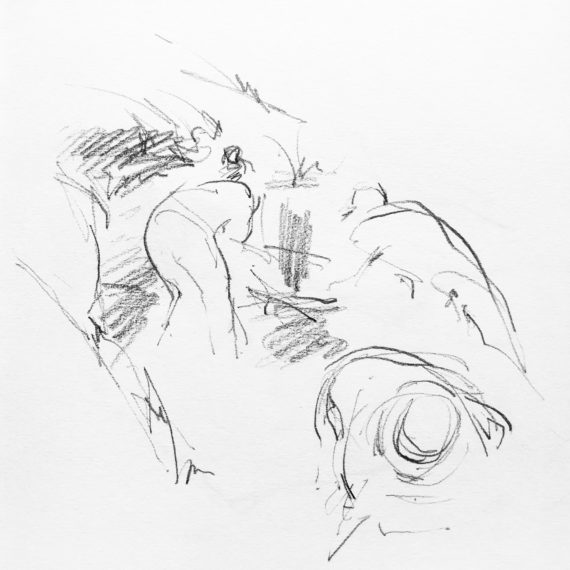 The afternoon break was over and, with only half an hour to go before home time, people were beginning to flag. Fortunately the Director came and said the job could be finished another day… 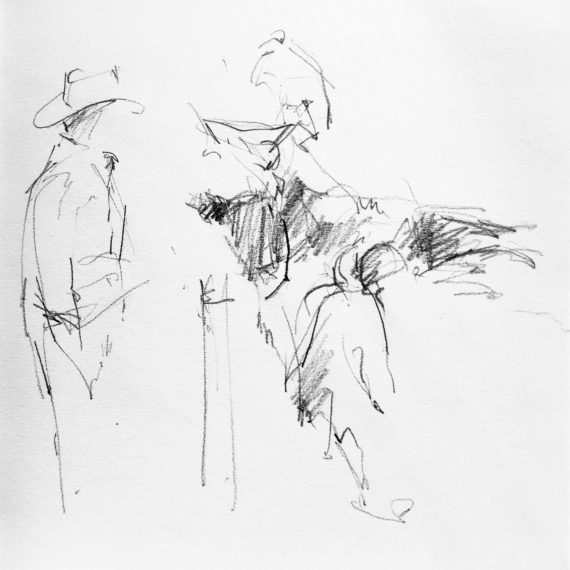 Final Trench Y drawing to follow in due course… 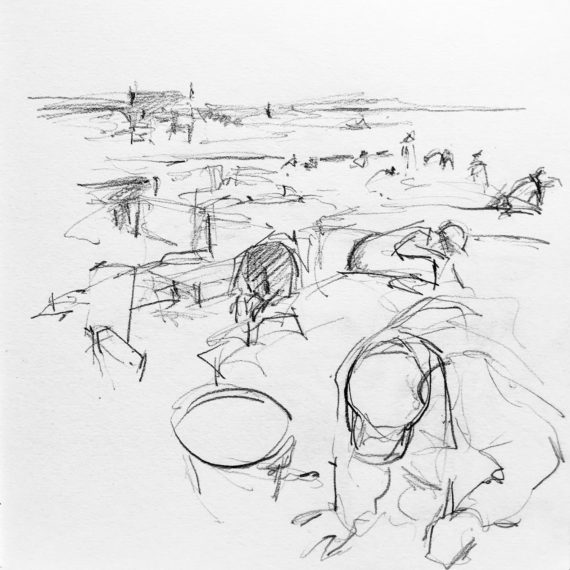 Today the main trench is being cleaned in preparation for aerial images from the drone. Everyone is involved bringing a distinct change of mood and pace. There is a lot to do. Every weed and bit of green bloom that grows so quickly on the earth must go, and all the trodden surfaces have to be scraped to refresh the excavations. 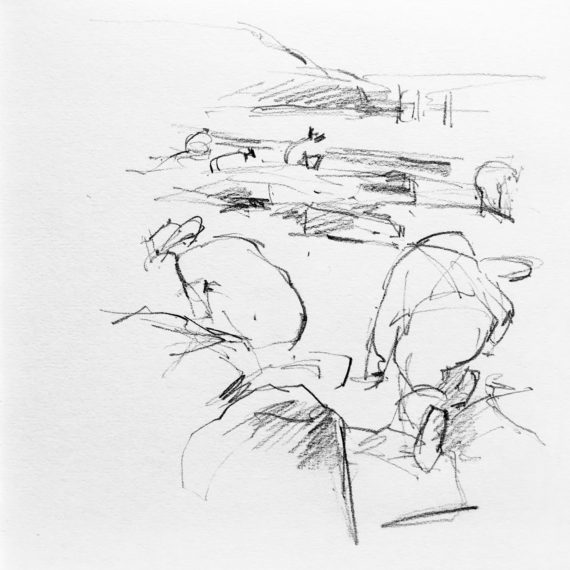 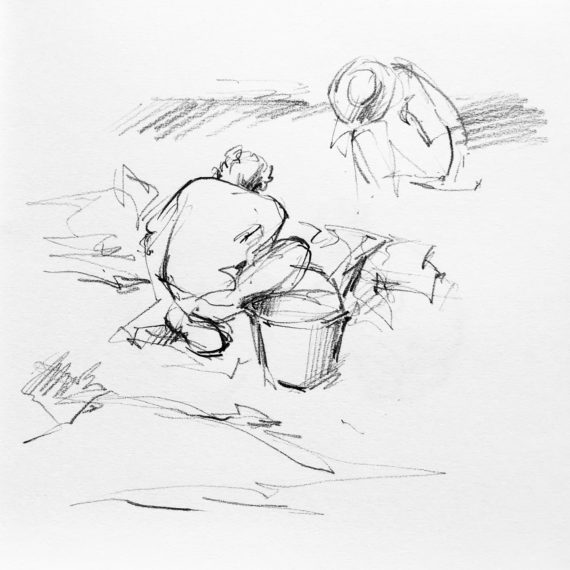 In parallel, my own mood has changed. The first half of the film is now ready to show on site. The editing process has identified bits of material that need to be collected, and has clarified the overall narrative. I also have a sense of freedom to think beyond the outcome of the film, and hope that some of the conversations for supervisors to sum this season’s progress will throw up further thoughts on the way forward. My preferred method is to respond to provocations rather than pursue some random idea of my own. It’s more exciting as you never know where it will lead.

Feedback is always good value.  At lunchtime I showed the current edit of my film to three supervisors who are leaving the dig today. As they are all experts in the field, I felt rather anxious and hoped there were no glaring inaccuracies in my ‘story’. However, they not only enjoyed it but noticed a subtly that had passed me by. 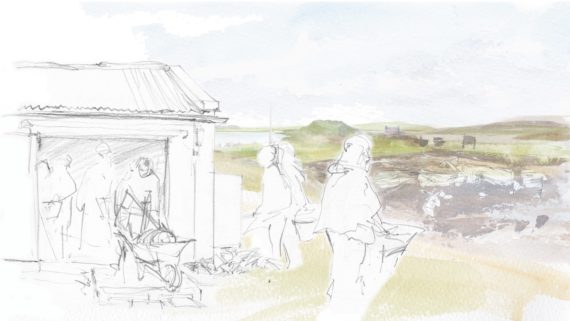 When layering drawings of the archaeologists with images of the landscape into the film, the people remain white against the background, which is often coloured. The supervisors today pointed out that they appear ghostly and ephemeral in a solid environment.  The landscape and the archaeology have existed for millennia, while the people and even the barn in this example are recent and temporary.  For my part this was unintentional, based on necessity – but now that I know this, it can be utilised in the rest of the film. 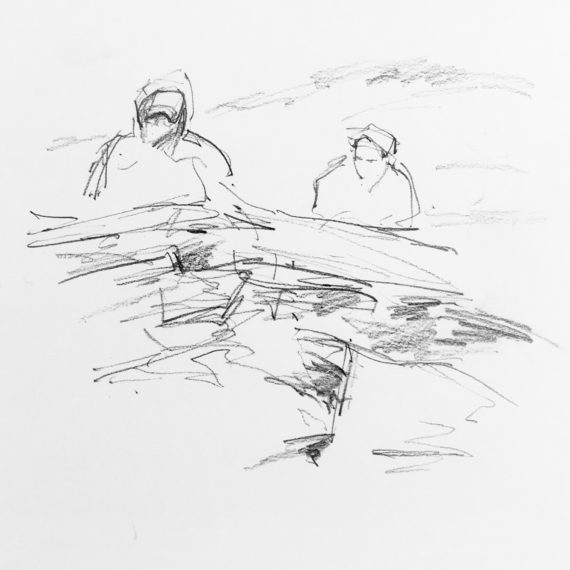 The rest of the day was extremely windy and eventually wet as well. So one hurried sketch of a conference on strategy in Structure 8, and a portrait in the shelter of the Art Hut of Jo McKenzie, micromorphologist and supervisor in Structure 10 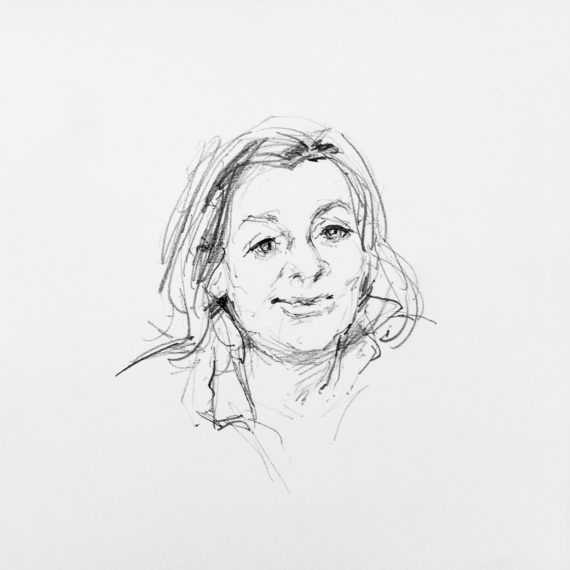 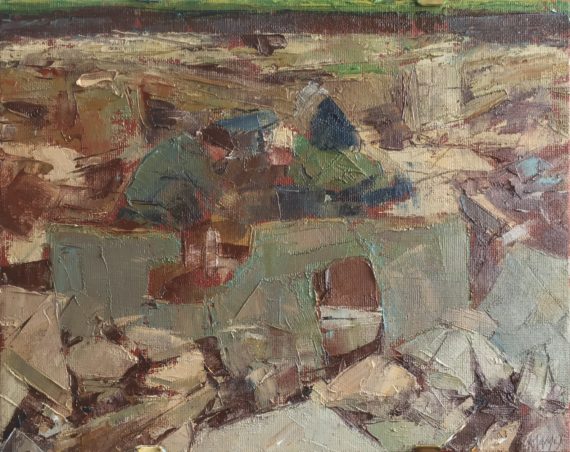 No writing today as I spent most of the time on this small oil painting. It is of some unusual stones, which are due to be removed next week.

Plus one drawing of work continuing around the drain. 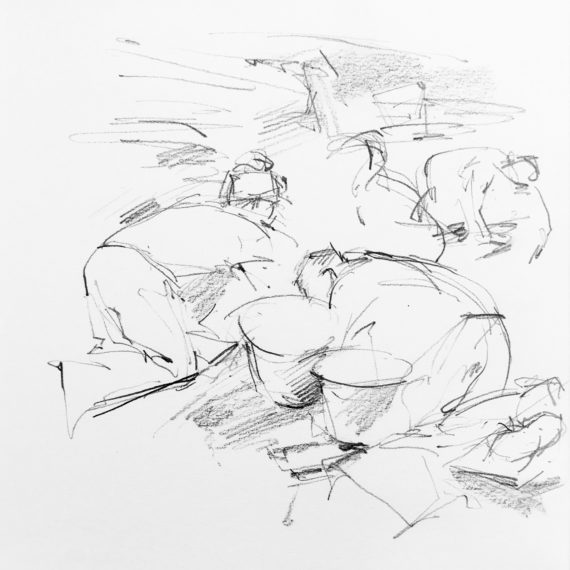