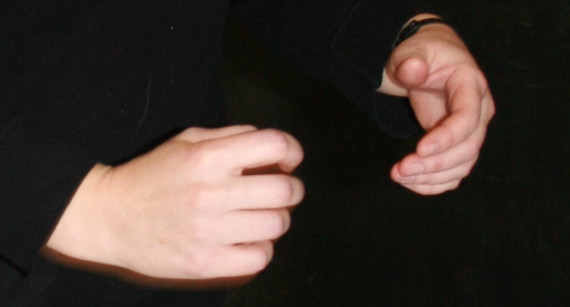 When Val and I started our collaborative conversations, we had a discussion about how I expected to see a range of unique postures and activities that reflected the vast range of art practice. Val expected to see more common postures and movements. Working with the Firstsite Research Artists allowed us to explore these positions, and in so doing opened up the project to a wider range of experiences and perspectives.

Talking to a number of practitioners from diverse practice backgrounds allowed Val and I to collect individual testimonies about a range of topics: posture, pain and discomfort, tools and equipment and wider factors related to work space set up and work organisation. The conversations were illuminating, revealing individual work routines and their connection, for some, to their conceptual concerns.

Talking about their experiences of art making and posture without having physical work, tools or equipment to hand produced some really interesting demonstrations of activities. These hand gestures or recreations of actions were a natural extension of the spoken description. The very nature of art practice as a physical endeavour was evident as we asked questions and for detailed examples. 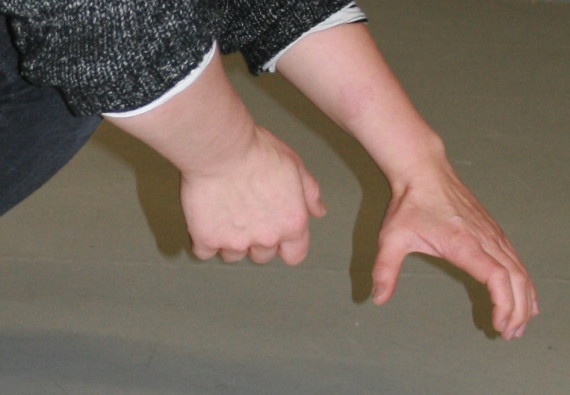 The art practices varied: construction, printing, drawing, digital recording and editing. Each activity did seem to have a set of unique combination of movements as I was expecting, but as Val predicted these could be categorised in terms of general movements of pinch, grab, lift, twist and so on and thus have commonality with people working in a wide range of professions and industries. Some of the creative processes described dictated particular working postures, and some were more physically demanding. On several occasion details of the ways in which burdensome objects and materials were carried were described and acted out; hips used as props for heavy weights, arms held in close to the slides to give stability.

Each person described how the computer was a regular feature in their everyday work. I wonder how many artists remain free of at least one form of ‘digital device’. At times postures associated with computer use were framed as admissions, in so far that the individual knew that they may not have the best workplace set up but were also pragmatic about the issues that prevented them from doing so, primarily finance. With the majority of artists being self employed, health and safety is the responsibility of the individual and as such ergonomic chairs, desks set at correct height and laptop stands are sometimes not possible and adaptations are necessary. Adapting workspaces, and for that matter domestic settings, is a common occurrence the world over and artists are not a special case in this sense.

Accounts of muscle ache differentiated between those that came from long periods of fairly static posture, and those that came from using the body in new ways. There seemed to be a sense of satisfaction from an aching body that came from working on a new process, with a new tool, managing to carry large or heavy material. ‘Technology’ aches from extended computer or uneasy digital postures were not held in the same esteem. The act of digital computer work is in effect a mostly passive concern: movements are small, concentration high. It is almost as if the energy that was not expended on physical activity during the ‘digital working hours’ becomes somehow trapped in the body. If no escape route is available for such energy through exercise or engaging in physical making, it can in turn cause an inability to relax.

It was evident from the practitioners we spoke to, and grounded by wider research, that artist activities do fluctuate widely between working over a range of activities within a day or over the course of a week, to engaging in a small number of tasks. The practitioners we spoke to were all managing portfolio careers, different strands of activities and income, both employed and self employed. This variety gives rise to a change in posture after a period of time. Concentrated pockets of time to work on practice (the actual art making as apposed to running the practice / business) within a working week were accompanied by longer periods of time that continued over 4 weeks of activity for particular jobs. Administration and replying to emails were used as a break from activities which were intense or immersive. Having the freedom to dictate working patterns and hours, when to take breaks and at what frequency, can be seen as cornerstone and key benefit of being self-employed. With this freedom comes responsibility: the ‘all nighters’ to complete work on time, and the inability to switch off from work thoughts.

As Val and I sat with the practitioners I was interested to know if what she was hearing was in any different to what I was hearing, and in turn what our shared understanding might be. Here she details some of her observations:

“I was interested that manual handling as it was such a big part of each of the participant’s work which included moving, lifting and transporting large pieces of work, carrying rucksacks and bags with cameras and other equipment on location, lifting very heavy equipment and tools in order to make their art. Long carrying distances were reported where the loads were carried away from the trunk of the body. Other postures mentioned in relation to these activities were elevated shoulders and raised arms while carrying heavy and bulky loads, resulting in fatigue and pain and discomfort but usually satisfaction and a sense of achievement! Repetitive hand and arm movements, with ulnar and radial deviations of the wrists, were demonstrated when using heavy equipment. 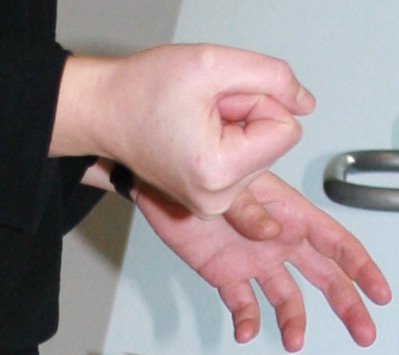 The artists were generally very aware of their bodies and often knew when they were adopting less than perfect neutral postures. Working at a laptop on a dining room table and sitting on a dining room chair was mentioned, where little about the workstation set-up was ideal. The user was conscious of taking breaks and this is fantastic. No one adopts the perfect posture all the time, but postural variety is key and getting up after an intense working session at the computer is great even if it’s just for a few minutes. Computer work (and poor workstation set-up) was also part of other jobs that took them away from their main art focus but were necessary financially.

Prolonged squatting postures were essential for one participant in order to reach into and work on large bulky pieces of work with various hand tools. Heavy power tools such as sanders were also commonly used. These tools place a lot of demand on the hands, wrists and fingers and the vibrating element of the tools caused discomfort. Others mentioned precise and close work, where a high visual demand was required. Other postures demonstrated included over spanning of the hands, rapid hand movements and excessive bending of the neck.

The work environment was frequently mentioned – most people shared their space and had different techniques for ensuring privacy in order to work. Environmental factors such as light, noise and heat were discussed repeatedly. Heat was often lacking at the workplace but the artists generally just put up with this situation and got on with their art practice”.

Working from our different professional positions of ergonomist and artist, its clear we hear and therefore process and understand accounts and activities from diverse directions. The differing perspectives of the same information or topic is what makes cross discipline collaboration so interesting and unpredictable.