So the drawing is pushing on, albeit at a painstakingly slow pace, I often wonder now whilst I work why I put myself up for this kind of self inflicted torture whilst peering through a magnifying glass? However, the answer is a simple one…because I love to draw. Perhaps devastatingly obvious and simplistic but accurate, the truth is I love being locked in combat with a sheet of paper trying its best beat me back. As from previous posts you will know the paper has won on quite a few ocassions but through the pain comes the pleasure…and I now feel I am beginning to break this barrier of fear and self doubt. Van Gogh summed it up so eloquently: 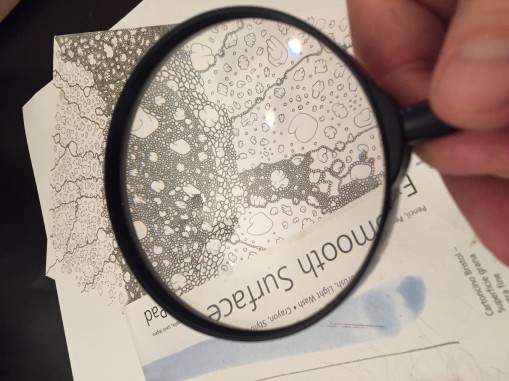 I wanted to write a little about my post graduate experiences and the struggle to maintain any practice at all whilst running a more conventional life with a nine to five job as well as a young family. I want this blog to avoid being too wordy and concentrate on the practical problems, solutions and results that I glean from my efforts.
As a Fine Art graduate from way back in 2007 I have struggled to keep any routine with my practice, mostly experiencing surges in creative production only then for long slumps of inactivity to take hold.
As with any adult personal circumstance has played a huge part in this peaking and troughing but ultimately I have come to the conclusion that if i wanted to Involve my lifelong passion for drawing and the arts in my life I would have to be prepared to work at it; Chuck Close once said “…Inspiration is for amateurs; the rest of us just show up and get to work. If you wait around for the clouds to part and a bolt of lightning to strike you in the brain, you are not going to make an awful lot of work.” This is where I am now.

Over the seven years since I have graduated I have produced mostly sketchbook work, and masses of it. I have also accumulated a stack of works on paper that range from the initial uttering of an idea deemed too valuable to forget to the polished and complete. Mostly though sketchbook work which records and plays with different ideas. None of these drawings were ever meant to be finished pieces – more to serve the purpose of recording the idea to develop and take advantage of at a later date. Inevitably this day never came, at least it did, but not much happened and more ideas dusted and fell atop of the already untapped reservoir of ideas that came before. This has left me with a huge amount of source material that needs to be explored/ finished/ developed and refined.

As I work full time and have a family I thought it necessary to begin logically by starting to integrate my practice into my day to day life gradually – like a canal lock if you will. A gradual rise of activity. I begun by picking up one of my small, ramshackle sketchbook with some pages filled, some empty and just getting used to making marks again and allowing that part of my mind to begin crunching ideas once more, I then decided to start tying up loose ends left by previous surges that have met a brick wall (either through circumstance of laziness) this for me has come in the form of a series of unfinished drawings in which had all arrived at that stage of too much work being put in and the results being (to my mind) favourable to just consign to the depths of the filing cabinet. These drawings have plagued my thoughts and served as an artistic conscience of what should of been – and for what I could of achieved by now. With this confirmed as my starting point I felt it necessary to document my experiences as I am certain I am not the only would be artist to have these strong aspirations yet struggle to bring them to fruition. I will try to write twice a week detailing my progress.