Flounce ruffle furbelow frill – the words loll on my tongue, adornments, embellishments, extra. Sewn on cuffs and collars they add a flourish, soften, feminise; without context though the fabric of certain terms is liable to change, will suddenly carry weight – collar someone, cuff around the ears, clip clobber clout club cudgel – curtail curfew calamity, k k k, a staccato of sound and meaning which makes the background music to my writing.

I looked up those almost superfluous f-words while writing my last post, in order to best describe the little collar which has its edges trimmed with a sparse little ruffle, trying out for size the language of wear and tear. Dress leads to codes. Coats. Greatcoats coats of arms sleeves (empty/clipped after war) uniforms. During the Third Reich softness was driven out of children who grew up with, even wore it on their skin, language which entrenched toxic notions of identity, difference and otherness.*

I write in English. I recoil from terms once active and effective in my mother-tongue, attitudes thought spoken put into practice in the fatherland, simmering with hatred and contempt, driving furrows between wide as oceans. I cannot write or say words like ‘racial’ or ‘swastika’ without worrying that I’m perpetuating Third Reich ideas, even here.

My favourite photograph of my dad as a wee boy was overexposed, taken on a summer day in the garden behind the house he grew up in. He is two or three years old and both he and his brother are dressed in loose approximations of sailor-suits (the image you can glimpse above is a different one). What moves me is the photo’s ghostly aspect; with its soft grey/white tones it’s always been on the verge of dis/appearance. The little I know about my father’s childhood teeters on a similar edge. The light, slightly crumply material of his outfit speaks of tenderness and care, not discipline, of comfort for the wearer on a hot day.

Last year I almost bought a postcard showing six children, between one and thirteen years old, congratulating=saluting Hitler on his birthday. In the end I couldn’t bear the idea of having it in the house. This photograph was taken 1936 (my dad would have been ten years old). The picture had changed. Hitler was in power, policies of exclusion and persecution (of communists, social democrats, unionists, the disabled, Jewish people, Sinti and Roma, and more) in full process.

Five of the children are arranged according to age, height and gender; the three oldest, two boys and one girl, are in Jungvolk-uniform. The smallest, younger than my dad in the photo I described, stretches his little body to hand to Hitler, who stands on the second step of a staircase in uniform and black riding-boots and bends down towards him, a posy. It’s not a successful propaganda-pic – the atmosphere is strained, as are the smiles.

The Jungvolk (see last post – one day I’ll have to talk about the organisation of girls) uniform consisted of short trousers, a shirt, black kerchief wound around the collar, and a side-cap with coloured piping designating the unit the boy belonged to. A cloth-badge would be sewn onto the upper-left sleeve, with the white lightning-shaped SS Sieg runes on black, symbolising ‘victory’. In said birthday-photograph Hitler wears a band on his sleeve too, presumably red, with a black swastika in a white circle.

The photograph of my dad with his brother gives nothing away about political currents, nor do any of the photos that follow, until the group-photo taken in 1942 of the boys of his birth-year in G. (aged 16). They stand in front of the entrance of Friedensschule (which translates as Peace School!), adorned with flowers and coloured ribbons tied cross-wise over their chests, bearing the inscription ‘wehrfähig’ (fit for military service). Most play to the camera, with nonchalantly open, tieless collars and a show of bravura and boisterousness; some have a flower or a fag hanging from their lips; my dad’s shirt is buttoned all the way up, his face is closed, serious, and I have no idea what that might mean.

Those wee blurred hands would later bear weapons. The time in-between taxes me. I found accounts on-line of nine/ten-year old boys in their short-trousered Jungvolk-uniforms joining in on the Night of Broken Glass and other occasions, throwing stones through the windows of Jewish-owned shops. Given that his parents sent him to the Jewish ghetto with food-parcels and that his dad hadn’t wanted him to join the Hitler Youth I so very much want to think that he hadn’t been a Jungvolk boy, or involved in similar bullying activities. That there aren’t any images of him in uniform until he was called up for the Reich Labour Service (see post 27 March + 14 April 2014) can mean so many things.

It doesn’t mean he would be free of shame though (which is really what fuels my enterprise – a sense that I’ve inherited a weight of shame which I’ve carried for/with him from an early age). Having grown up during the Third Reich must clad almost everything in a halo of night and I have a hunch that this is one of the reasons why he didn’t much talk about his childhood.

It’s probably clear that I wouldn’t photograph myself standing in a field doing the Hitler Salute, although I do find Anselm Kiefer‘s work raises interesting questions. With their miniscule, intimate scale my pieces may lack boldness, but hopefully do occasionally pack a punch. Not sure about this one: For the little red collar I crocheted a while ago and used as part of my fallen pillar (see post 5 June 2014) I worked from an image of a cuff in a history-of-crochet-book; I liked the pattern, those groupings of small fourfold bumps (like tiny firsts pushing through the material) and the extravagantly curly ruffle-edge and tried to subvert some of its prettiness by using the colours of the Nazis’ flag. Just on the edges you find tiny white and black stitches… I read somewhere that after the war those flags were cut up and the material used to make coats for girls, little Red Riding Hood-cloaks steeped in hateful history. The emblems disappeared.

Elena Thomas** who has in her studio a special pair of curly crochet-underpants sent me a parcel packed tight with shirt-cuffs and collars in manly blues to play with. I did away with the original puffed sleeves and laid out an old doll’s dress with two cuffs folded at 90 degree angles, then did not, as intended, post this quick sketch as one of my An #artling a day-series on @marjojo2004. I try to contain readings and appropriations – don’t want to send images into the ether without the context of my project here. Too squeamish? The shape made from tea towel off-cuts I did post.

*For a while members of the Hitler Youth were issued with their uniform a sheath knife, bearing the inscription Blut und Ehre (blood and honour).

**Elena also made audio-recordings for me of her latest blog-posts as eye-problems are currently making the deciphering of texts extremely difficult. I can tell you: this is better than reading! She does voices and should be on radio. 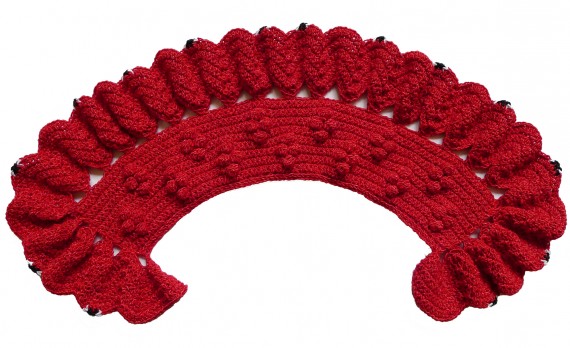