Talking with Darren on the phone about discomfort, fitting the body into small and awkward spaces, and the traces that might be left by the body. I tend to move towards new work crabwise and in addition to using Pinterest as a pool for references I have put up some old work on the studio wall. 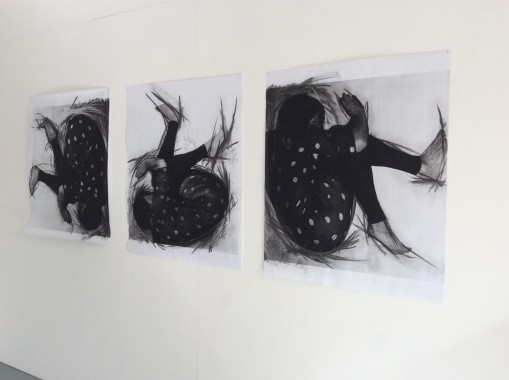 Darren and I have talked about possibilities for the exhibition but as he is in London and and I’m in Suffolk, and we both have other commitments, we are creating a ‘mood and movement board’ and pooling references on Pinterest to inform the work. 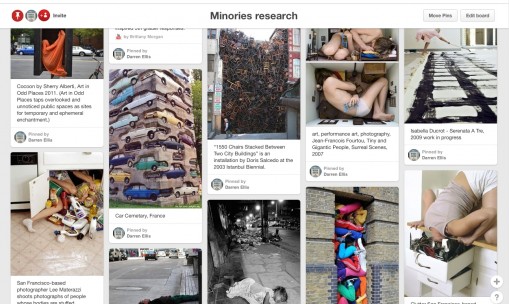 As from today we will be working remotely together to develop and test different ideas – which will be an interesting progression of our collaboration  to date and play out some of the ideas Kaavous has outlined about how the exhibition is shaping.

It was good to get feedback from the curator, Kaavous:

I have been carrying around the proposals you sent and trying to work out which feels more relevant in terms of other works in the show.

I wonder if it would be possible for the 2 pieces to work? The work extended from Born Equal could perhaps be installed as part of the initial exhibition, or material ‘objects’ and perhaps the elastic performance could be performed on the last day of the exhibition, or somewhere near the end, in response to the other materials it finds there? This would allow the exhibition to exist as itself then for you to interact with it and create a new dialogue for people to explore. There are a few works that have either been ‘pre-performed’ (in terms of capturing sound or video) or require ‘post-performance’ (inviting the audience to respond to instructions or invitations) – some works do both.

I think the concept of the exhibition is developing into the exposure, or unpicking, of dichotomies that can exist between the making of work and the physical manifestation of work, and perhaps performance being a useful tool in terms of exposing this – particularly when the performance is viewed and the performance also leaves a trace. The question of when a work is a work – at what point is the manifestation of itself – is an unexpected one but hopefully something that will be of interest and will be explored in this show I think. And alongside that there is the mapping element that I am trying to work in, although perhaps that sits alongside naturally.

Realising that I was interested in movement in relation to the spaces at The Minories and other work in the show, I asked Darren Ellis if he would be interested in collaborating on developing work for this exhibition. In discussion we proposed two approaches:

– coming into the gallery and moving through the space to view the exhibition, with the movement drawn from work in the elastic. This would mean an awkward and indirect movement, the reasons for which would not be obvious. The space and the exhibits would be delineated and discovered through a route and progress that was slow, hindered by unseen obstructions, illogical and unrelated to the layout of the space or the works on display. 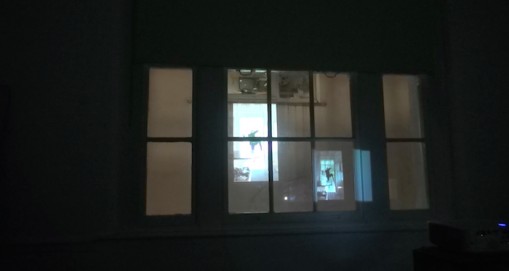 Still from installation of film ‘Living Room’ at the Place, movement drawn from work in elastic web.

– bringing together ideas from an earlier work, Born Equal, where I moved in a constraining body suit which was embedded with pigment and some of the experiments in space with Darren and the dancer Hannah, coinciding with thinking about entitlement and the urban environment. This would be about seeking a place in the gallery to rest and view, without confidence or a sense of having permission, skirting the edges and testing spaces to lean, sit or lie.

Visiting The Minories and talking to Kaavous he was interested in how the work I had been doing with Darren with a web of elastic disrupted a space and determined movement. We talked more broadly about how people respond to space and how their journey through spaces is affected by internal and external factors and barriers. I referred to an article in the Guardian about aggressively excluding urban planning and he suggested the book The Contemporary Picturesque by Nils Norman. 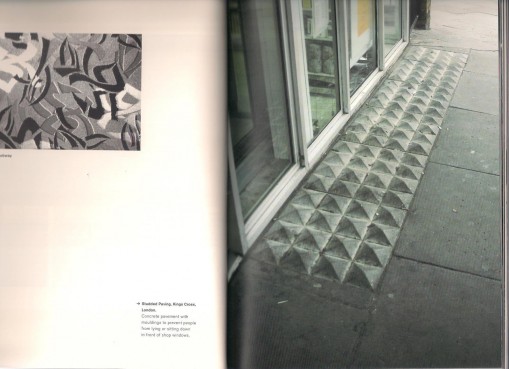 Ideas about controlling behaviour made links with previous work involving the body and constraint, including the film Born Equal and related action drawings.