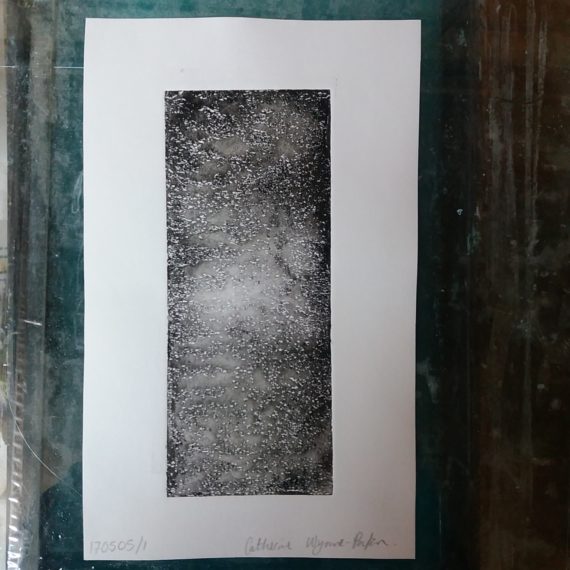 A full day in the Print Shed today, journeyed there in a hire car that sounds awful above 50mph, horrid stressy sounding engine.  But, hey, it got me there! (My car was driven into, while parked, on Saturday night and has been written off).

It took a while to get the prints comings through – had forgotten the amount of elbow grease involved and was sure I was doing something wrong.

The print I’m looking at now closely today reminds me of dreams.   There’s a starry quality to the print which wasn’t intentional, the white specks I expected to print black instead.

I am currently being drawn towards figurative work, of water, of plants, of landscape, of people small in an expansive landscape.

My art vision can be summed up as

‘Art is to trip up, like that jolt
in a dream, while drifting off to sleep.

Art needs to get out more.’

And lately I would add that my focus is on responding, like humming a tune walking down a road.  Responding to all that surrounds with mindfulness and in my own way.

The performance I’m developing for Fringe Arts Bath feels like it hasn’t moved on a great deal from inception, despite much mulling over, research, form filling, talking and hair pulling.  Action is needed to really get a hold of it.  My aim all along has been – to provoke a positive and effective response to the issue of reduction of library funding.  Not a protest, more a clear-sighted image of what libraries of the future could be.  I’d like to light up people’s imaginations and dreams through seeing and perhaps taking part in something positive, in what libraries can be and already are, it’s just that we are measuring the wrong things.  How can I make my performance a potential catalyst for people to dream big about their future and how our future libraries might be a part in this.

What I have been developing in this performance – chalking up library use statistics is rooted in the past.  And what can it possibly do?

What if the figures chalked up were not just library visits and issues, but dreams, big and small, realised by people who use libraries? 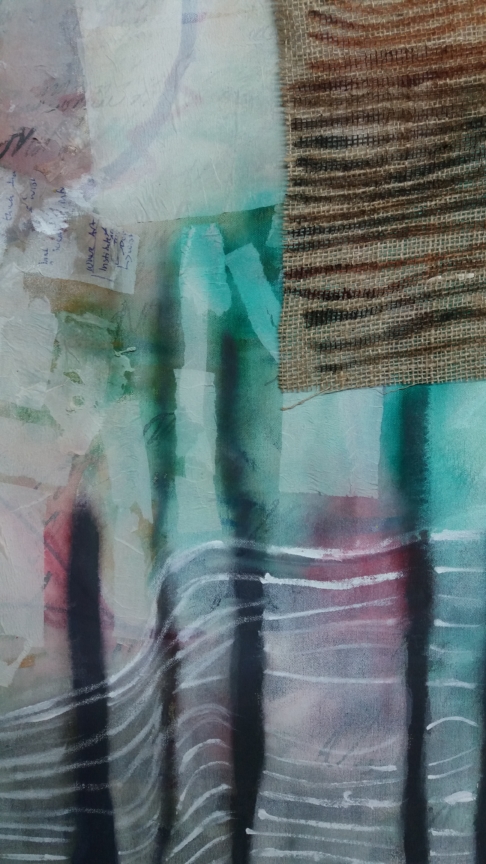 It is a humming,
a dance in feeling the way.
It’s a state of continual curiosity,
uncertain.

It is not fixed,
it is not just about this,
or about that.

It’s complex,
it’s about everything,
and nothing.

About life
and work
about stopping
and starting.

Where from here?
Who knows…
Step out and see.

Statistics of library use around the UK were going to be the material for this performance, yet after sounding out possibilities for this performance and visualizing, it turned out to be not such a compelling idea for a performance.  The participants own movement becoming more vital to the whole thing than the movement of numbers.  The ideas around my practice are leaning towards a physical response to the surface on the land and of text.  You could describe it as the texture of the land.

Viv Barraclough, (who has responded to the Fringe Arts Bath Lost Library call out) and I had a long conversation over the course of a day together recently and worked our way through several scenarios.  Including one involving a giant abacus!

The most compelling idea yet involves a group of participants starting and finishing at the library, with visits into the library throughout the performance day.   A transparent bag on their back to contain an (unpopular) book loaned from the library, to explore Bath responding through movement to the textures and people encountered.  My aim is for it the piece to be responsive to the environment and people around.

This piece moves on from the Eisteddfod performance – then I had lots of different things going on at once which dampens the effect of any one of them.  I’m taking on elements of my Lost Library performance at the Eisteddfod and the giving away seedlings is continuing, as a standalone engaged piece on exchange.

I found that after the Eisteddfod festival I had a surplus of seedlings and gave them away in my area.  I met people who lived only a stone’s throw from me who I’d otherwise not speak to.  I found that this ‘cold-calling’ to do give something rather than canvas for support, religion or business was rather interesting.  Some people wanted to donate to the project (I didn’t ask, they were curious), others offered me something they’d made in return.  And I only called on about a dozen houses.  Would be very interesting to extend this.  reenfingers gardening group are growing tomato, little gem and zinnia seedlings in the next few weeks.

Artists I’m looking at:  Mark Storor is a dance event producer currently working on a street performance in Ryhl, north Wales, involving many performers in the street. The work is currently in rehearsal stage ‘Lifted By Beauty: Adventures In Dreaming’ http://www.broadwayworld.com/westend/article/Rehearsals-Underway-for-Mark-Storor-and-National-Theatre-Wales-Rhyl-Walking-Production-LIFTED-BY-BEAUTY-20170227

Mark Storor and National Theatre Wales are getting to know Rhyl and some of its residents over a few months and gathering stories from those who know the town best.

Marina Abromavich’s way of talking of connecting with places and spaces and ways of being as well as approaches to mindfulness have something to do with what I’m trying to do here with my performance.

Kate Daudy sang at regular times during her YSP residency, she uses text, positivity and is particularly socially engaged in a way I relate to.

I recently went to Oriel Davies in Newtown, Powys for a conference on Dancing in the gallery which I dropped everything to go and see.  My thinking around movement and response to the direct environment (as well as text, but texture is part of it) is something that keeps coming up.
I have a challenge with the Fringe Arts Bath piece in that I can’t visit until at the earliest the end of April, so I need to work with this in engaging with people in and around Bath and with the library.  With Bath Central Library being re-located I’m interested to gather peoples stories about the library, their personal stories relating to what they get from being in the library and their use of library material on loan.  I could talk to people (and record the conversations when agreed) about their experiences in and of the central library and then pick phrases from each to work with.

I see there are two distinct parts of what I’m attempting here again, it doesn’t take much for what I think is a simple idea to get messy.

Where’s that coin. I need to flip it!

I’ve recently been to hear Dr Elin Jones (Welsh historian) talk about women in history who should be more famous than they are, as part of the Abergavenny history society’s programme of lectures. One of the women had ‘letter writing’ as one of her occupations – is the modern equivalent email and online messaging?
Alongside thoughts of historical women who’ve been more or less left out of historical records I was thinking about the financial strain on local theatre’s like Abergavenny’s Borough Theatre. Lots are losing funding hand over fist. Back in the at least one of the world wars the theatre was used as a dance venue to lift spirits (something to mull over). I repeatedly try to find solutions to these cultural losses.

One of the key practical elements to my practice that has continued over the last few years is exchange between individuals and concern on the erosion of our culture through reduction of cultural infrastructure. I find myself wanting to declare war on the erosion of our culture. Which is happening piece by piece, and since 2010 things like libraries, theatres, public loos (enabling more people to interact / get out more) are bit-by-bit eroding our future. Art and creativity is essential, though those of you reading this don’t need to be persuaded, I know!
One of the women had ‘letter writing’ as one of her activities. It is almost a lost thing. We perhaps do it via email, online chat now.
I am really interested in how people encounter things. How they circle things. How they move in a gallery, in a shop, walking or skipping along the pavement, up steps. The wonderful movements of confidence and the counterpoint in the mundanity of life.
I am beginning to feel more connected to my surroundings. The Clydach Gorge project has helped me first of all realise this and then define it. (Currently etching alongside developing performative ideas for this)

I went to a session at Oriel Davies led by Simon Whitehead called Dancing in the gallery I only found out about the session the very day before, but dropped everything to go. And I was glad I did. The session had a mix of artists, performance artists, dancers and curators and there was a site responsive piece of dance happening in and around the galleries while we were there, who came through our session during the talks. I have a better understanding of how performance can fit into a gallery setting and the logistics and opportunities that come with it. My approach is in thinking about performance inside and outside, mostly so far not in gallery settings and I am interested to see how performance might be in a gallery. The description (by Geoff Boch) of Katy Coe’s running practice, she’s a solo figure who runs a continuous circuit. She sheds excess thought and (at the Hayward Gallery MirrorCity) had a live phone in her pocket which fed back into the exhibition space ‘venting’.
Simon Whitehead’s performance at Oriel Davies involving the furniture and often a level of exhaustion. The deciding how to react to interested visitors. To speak when spoken to or not? To adapt movements in response to others in the space?
I lear 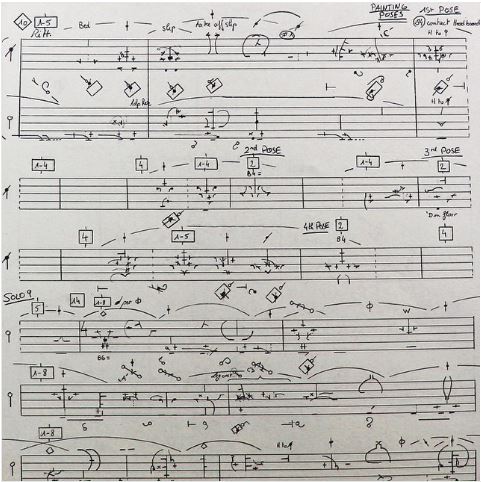 nt of notation used in professional dance. Especially of notation used by Amanda Eyles as assistant to the choreographer, video about Woolf Works: https://youtu.be/M0ADxUspPW8 used in the Woolf works by choreographer Wayne McGregor, music Max Richter.
I am fascinated by how the complex movements can be written in notation. This notation is only useful with a thorough understanding of dance that comes from being a trained dancer/choreographer.
0 Comments