Back in the spring of 2015 I had the notion of ‘bathe in ignorance’ on my mind and it was something I had to respond to – I wondered how I might Bathe in my own ignorance? Naturally (for me) I headed to my local library to find the biggest dictionary they had and chose a few pages to work with and from those pages I noted the words I didn’t understand. This gave me 254 words, which I projected through paper and later black plastic by pricking the words into the material in dot form. I then made the black plastic into a tepee-like tent and, luckily in May we had beautifully strong sunshine and once inside I had the form of the words projected onto me and anything within the tent. In the summer I began painting, acrylic on canvas – the starting point being one of the words, working intuitively. September found me exhibiting my work at a solo show at The Print Shed in Madley (www.theprintshed.net) and as part of the show worked with the grass as my medium, this time using black plastic sheeting to write a few of the words across Jill Barnaby’s garden there. I am currently in the middle of painting all 254 words onto mini calico covered boards, picking words out of a bag.

Around this time, I began thinking about the positive impact libraries have on lives. At times in my life I have used the library a lot, at others, not so much. One way I have used the library – to find unknown words – has fed my curiosity in a way that simply wouldn’t have happened as easily without the library nearby. I wanted to find a way to shout about the library, discussions around the reduction of library services often seem so, well, quiet! Not just write about it in a blog, or another article in a newspaper, how could I make the library (and thoughts of libraries closing, opening hours reducing and staffing levels being squeezed) jump off the page and into life? Words and text are a pivot for much of my work and the possibility of turning text into movement has been forefront of my mind throughout this quest focussed on libraries (for their multi-faceted benefit to our society, including financial, which they don’t receive royalties for!)

My first thoughts for the project were to turn text into movement through dance and to take the library out of its usual building and into a festival site in the form of a mobile library. I first referred to this project as the mobile library dance. Next came the long period of contacting various organisations and festivals. So, through many months of contacting, explaining, meetings, emails, telephone and Skype conversations I came to have the shape of a performance coming together.

More on the project now:

This is the first part of a series under the umbrella title of LOST LIBRARY and Abergavenny Library is the fulcrum.

Border Country is the inaugural part which (or uses the text from) puts the locally set novel in the limelight (Further parts of the project will look at other aspects of libraries). The book is by Raymond Williams (1921–1988), who was a Welsh academic, novelist and critic. Raymond Williams started writing Border Country in the late 1940’s and completed it in 1958; with a railway signalman based in Pandy and his son being the central characters. Issues the novel touch on are economic change, the closure of the railways, the concepts of community and belonging, migration and the place of (and respect for) education in south Wales. Gardening features in the novel and so the performance involves a converted 1950’s wheelbarrow being pushed by a librarian to the festival site. We’ll be giving away seedlings of plants featured in Border Country and some of the text from the novel along the route to the Monmouthshire and District National Eisteddfod festival site.

To take place on the following days in the morning:

Abergavenny Librarians and the Friends of Abergavenny Library Service (F.O.A.L.S.) have been enthusiastic about this performance right from our first discussion. Students including Jasper Cousins on the Extended Diploma Art and Design course at Hereford College of Arts have been working on the concept, design and building of the converted wheelbarrow. Popular Music degree student Mary Tolhurst is composing a piece of music inspired by Border Country, this will be played from the Wheelbarrow during the performance. Mary is interested in the subtle transformative effects of music and how it can influence what we are feeling. The Library of Wales have given permission for the text of Border Country to be used in this performance and have donated ten copies of the novel to Abergavenny library.

I am now in the middle of sowing many seeds and some of the Chrysanthemums have germinated! Many seeds left to sow – aiming for 50 to give away each day.

Back in November I wrote this and it feels right to quote it here (although it is not particularly a dance now):

What is the library dance for?
Absorbed in words.
Where will they take you?
Around in circles,
Or somewhere new?
Something short,
Or a great big tome?
What is it for?
These characters we see?
Looking for info
Seeking solace
Wanting to be social
Fighting your case
Setting out to be a part
Or something small or grand
A seat, a shelf, a face, a screen
By day, by night, by winter and summer
A solid form in the town,
A refuge for the mind,
Now fun, then work, escape and keeping you current,
A place where paths are crossed,
And sometimes, forever altered. 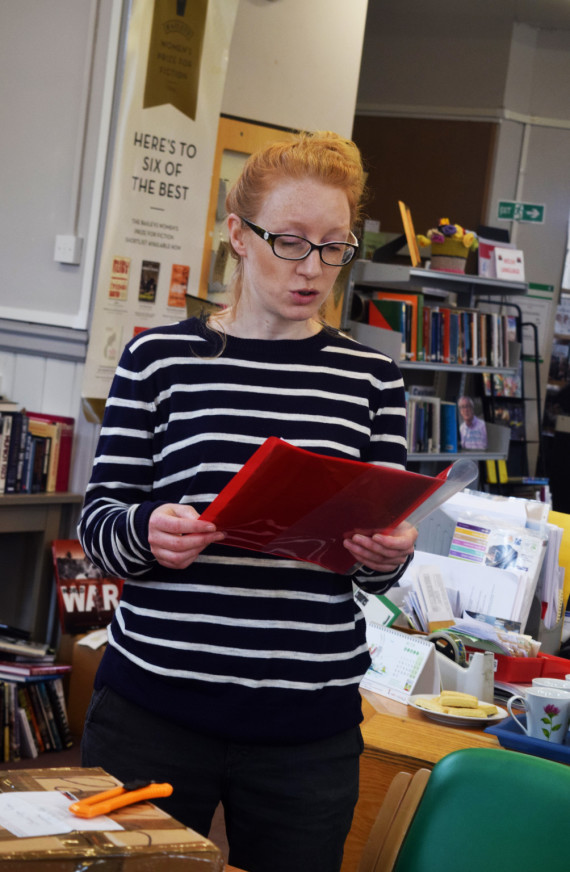 The pages only live when planted in your mind