I have been looking at etchings on the Tate website and soon found myself engrossed in Peter Doig’s first print portfolio, which includes Red House. The way he uses trees to interrupt interests me and the silhouetted figures are at my preferred scale. What this brings to mind is people in a gallery looking at paintings, for instance in the Turner hall at Tate Britain, there’s a balcony there where I’ve spent time looking at visitors encountering the artworks. This then reminds me of artists referring to the white cube actors the black box. Then the green room backstage, the dark room, which is actually red in when in use. I digress. What might the Red House represent, if I had to name a function? I would say a place of exchange. This could be of words – of passion – of both, even.
Mixing up imagery of the roadworks with people from the past watching on – like 1900’s images, the figures the scale of Lowry paintings, looking calmly on to the changes we’re making.

The words are so often not available for what I mean so I must be my exploration and do it.
I have encountered barriers to my exploration in embodying text through movement, my own limitations. My adventure has been diverted around a perceived barrier.
I have recently been meeting and talking with many other creatives

a) who are interested in setting up peer mentoring (at the ICA late January),
b) are socially engaged (the Artes Mundi 7 conference in Cardiff)
c) through producing video conversations around their work ART BUBBLE in conversation series.
and d) have an interest in dance practive dancing in the gallery talks at Oriel Davies, Newtown on Friday.
I have had an enormous amount of input and I am again bursting to let it out.
My work is arranged in pockets of interrelated thoughts.
Lost Library – embodying the value of libraries in society through performers moving statistics.
Clydach Gorge project – in progress, early stages. I’m etching in response to the area, but feel my enquiry is leading me elsewhere – responding to a midsummers night dream and Ric Hool’s poem the first cut is the deepest on site through movement. The Shakespeare may need to be set in a cave – challenging, and Ric’s on dug ground on site ideally. The etching, I think this is still a valid media to work with, I just haven’t got natural with it yet.
254 words to 254 mini paintings to taking those paintings on walks and snapping them on a mobile and posting these location shots on Instagram with accompanying narrative texts. #paintingwalk. The ongoing story of each word is unfolding gradually.
Text to physical notion being explored through multiple projects, including developing public talks on the development.
I have been considering many other artists work, in particular Marina Abromavich, due to her attentive ability and how she describes being both in control and going with the flow. The mindset. Fiona Banner’s elements of text set in, for example urban environments and the choreographer Wayne McGregor who works with the royal ballet and has developed a notation system for movements. I’m currently watching his (Virginia) Woolf Studies on YouTube. 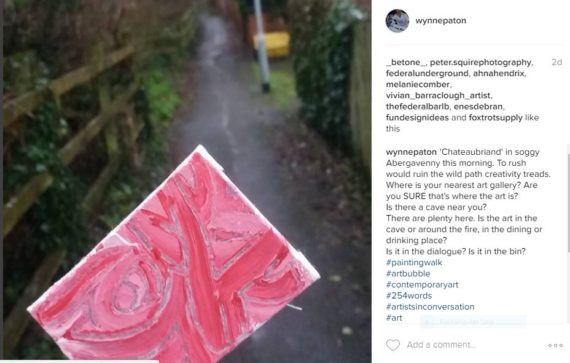 I am really interested in the possibility that Shakespeare may have written A Midsummer Nights Dream in a cave in Clydach.

Then on a stroll earlier I was considering the act of walking while reading and so therefore feeling my way along.  This is how I often do things unthinkingly when tired, instead of fully seeing where I am going, acting as if half blind.  It would add difficultly if I made it on bumpy terrain.  Perhaps even a cave.

I often think that I need to quit the writing.  Then I just carry on.  Looks like I’m wrong or self-destructive or both!

Basically I try all the methods available to me.  Writing. Painting. Printing. Video. Photography.  I am following my nose.  Whatever form I need to do, I do. Playful works for me with my words.  I can express myself fluidly in text (when not under pressure) and in dance.  Dance, like music, has no direct representative quality, but can be highly visually perceived.

I’ve been reading up about various cultural notes linked with the Clydach Gorge collaboration and in looking at a Wiki entry on how Mary Frances Frere came to write about Indian folklore, the phrase What started as an idle conversation jumped out at me.  This is often how the very best things start, conversations while travelling in the car, just letting things come into the mind, almost meditatively surfacing.  Hmmm.  This is how a few ‘opening my world up’ things have started for me recently.

While watching my son at athletics this evening I heard a coach say to an athlete in the advanced group Run how you feel and it stuck with me all evening.  While walking around the track I ended up finishing an article debating whether originality in art is overrated while walking and it reminded me of how I’d wanted to do something involving reading while doing another activity, such as expressive movement, or exercise or maybe something trickier?  Still mulling that one over.

I cleaned up the hexagonal tiles and piled them on my studio table.  Bears some resemblance to the Giants causeway.

I got painting more of the large canvas propped in the studio this morning, titled it Clydach (Ellie) as I’m thinking about the landscape around Clydach Gorge yet there is something about what I’m trying to do with this painting which has something in parallel with how late artist friend Ellie Tremayne-Exton painted. At least how I thought she painted…trying to get a feeling, a breath of a place.  This is what I saw she did, rather than what she ever said.  She painted cornwall from memory and I am painting a place a barely know at all. They are both special places, the long term loyal knowing and the excited, new getting to know a place part. They are at the opposite end of a spectrum of knowing.

A very cold start in the shed yesterday morning!  Began a large stretched canvas –working freely, thoughts of the landscape around Clydach on my mind.
Went for a family walk to Clydach on Sunday, up the ridge above the village and walked around the top and then down – very steep, bracken covered path, streams covering the path every so often.  Once we were down in the woods on the way down, found what I think must be a lime kiln.  That’s the third I’ve seen recently.  This one, to the side where a stream came out had two flower arrangements, one with lilies and a dried flower wall hanging, with ‘A mother’s love stays in your heart forever’.

Nearer the village we saw a field of what might have been Jacob’s sheep and I was surprised how many people live right up there, up the steeply winding roads on the side of the hill.  Must feel really remote on winter nights.  Near the ironworks Andrew spotted a load of dumped hexagonal tiles, which I’ve picked up, slugs and all.  They are now awaiting cleaning in a wheelbarrow by the back door.

I’ve begun drawing on polystyrene plates in biro, my memory of the landscape, to be printed.

Yesterday I pulled fact 7. On Allison Neal list: “Sir Bartle Frere’s daughter Mary wrote the first English-language book of Indian story tales Old Deccan Days.  Her sister, Catherine Frances Frer illustrated and edited the book.  Catherine also edited several cookery books, one of which was reviewed by Virginia Woolf. “  I’m curious to read VW’s review of it and to find what Old Deccan Days is about.