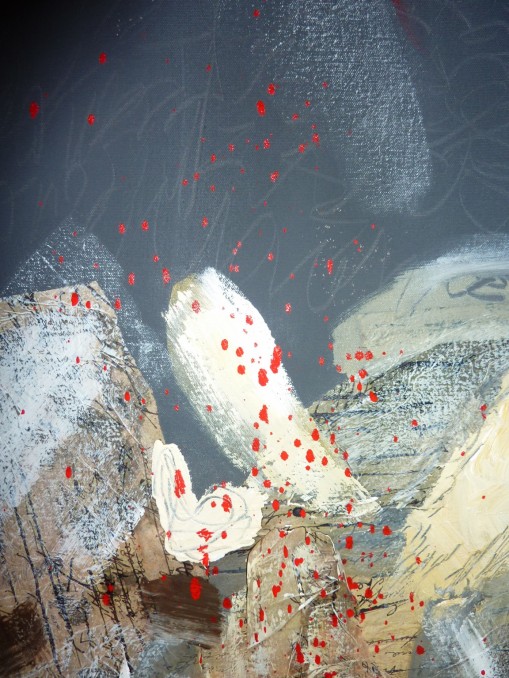 Settling into quite a routine now. The grids and lines have fallen by the wayside in the last few days, at least for now.  I was feeling that I couldn’t get into the word (enough) that is my starting point by working in a grid or with lines. It didn’t quite do.  With an expanse of canvas I am hoping I am more able to gently hone in on formal qualities emerging by having a word in mind.    On the 14th the word was allo- meaning other, different.  I brought out the contrasts in the previous painted form by making areas either white or black as a way to kick off.

Haven’t got much canvas left (what i have got will only last me two weeks, tops.  I would like to have stretched canvas’ ready to use, a few weeks worth at all times would be great.  I am mainly trying to set myself up so that while I am painting, all that I am thinking of is the painting, not where the next canvas is coming from.  I am also attempting not to overthink while I am painting, to follow my nose.  Paint is also running low and the budget is tight, have been doing temporary jobs while looking for part time role, they are like gold dust!

Today I am on 20/254 painting the word Aaronic  – pertaining to Aaron, the first Jewish high priest; Levitical…. Levitical – (have just taken a part of the definition on)- pertaining to ritual . I got the emulsion (primed it this time, though worked into it wet) going onto the canvas as soon as I’d picked the word out of the bag, looked up definition and straight it. It is a battle for me not to internally question every move I make on canvas, so I have to act once the word is in my head, but  before I start coming up with reasons not to do this or that.  Just do it – remembering I can at any point scrape the paint off and start again.

With this huge number of words to paint, I was initially considering ‘sharing’ it on social media.  I felt, before I started, that I needed the motivation that would give me, but now I’ve started I don’t actually need it. I have stubbornness by the bucketload, so don’t feel motivation is a problem. I am intending to show some of the works in my front window again (did this in the early summer months) as I have people staring into my front room anyway!  It feels low-key, low-fi and it’s free.  I was going to publicize all the ones which passed my ‘1 month put away test’ on Twitter, Instagram, facebook (would have set up a facebook artist page), but then started thinking about the time this would waste, and that I don’t want to self-promote, at least not in this way. [since initially writing this I have linked to this blog post and image – it felt relevant in the conversation on twitter – this is all getting a bit meta!] I feel that I don’t really get social media.  I reckon, for it to work, I would need to interact far more than I am prepared to (time). But, also, I am so interested in what other people are doing sometimes that I need to catch myself and stop life passing me by while I’m sucked into a screen.  I need to check I’m doing what I must so often while online.  I don’t think I’m alone in this.  The internet ever-presence is a huge danger to my own practice, it feels incredibly freeing to know i will be offline for certain set periods, except on rare occasions.

The screen being a massive source of text and imagery, but its use is so limited, the 2D video experience is great, but just going to my local theatre at the weekend with my son and friends to see I believe in unicorns with Danyah Miller bringing the story to life – the set being piles of books and ladders, the books opened up to provide props.  The imagination that is tapped and reached with low-fi equipment (though, there were hand held projectors, great sound and lighting) in a way that is impossible with something on a screen.  More is left to the individual in the audience.  Of course I loved this with its story of Libricide and themes on a love of books.  I’m considering the transformation of the play in the minds of the audience.  How am I transforming the words in my painting of them?  Am I even transforming the word – no, I’m painting my response, it is not what I see when I think of the word, its initiated by the gestures I make when thinking of the word, the colours I choose, the textures I make and the forms I mould on the canvas.  But then, in  eyes of viewers of my work, what then might they see, knowing the word and seeing the painting?  Would they see any link between the title and painting, or none at all? And does this matter? 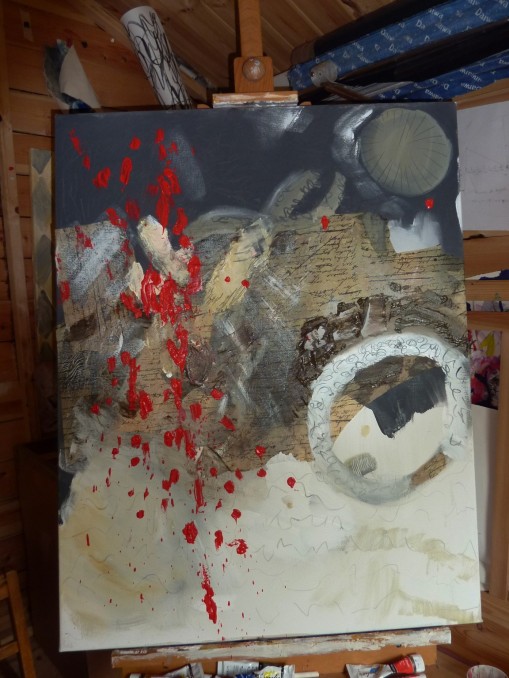