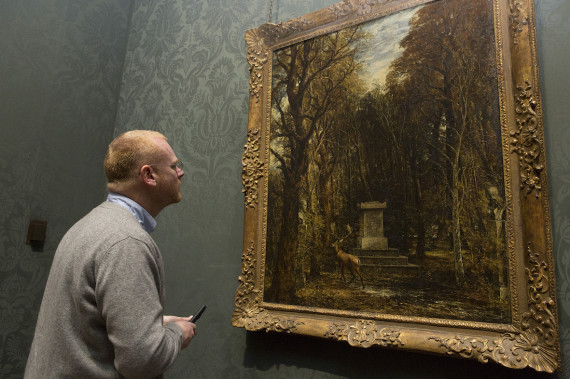 George Shaw came to prominence with his paintings of the estate where he grew up in the 1970s, in the Tile Hill suburb of Coventry. He attracted attention for his use of Humbrol enamel, normally used for painting Airfix models. Painting on hard surfaces, such as MDF and plywood, his paintings possessed a distinctly sheeny, reflective, almost lacquered-looking finish.

Shaw was nominated for the Turner Prize in 2011. He was shortlisted for his exhibition at the South London Gallery, ‘The Sly and Unseen Day’, the title of which comes from a line in Thomas Hardy’s Tess of the D’Urbervilles.

Titles are clearly important to Shaw, and he admits that he enjoys the uneasy disjunction between the images in his work and their titles: as well as lines from classic novels, many of his paintings of the down-at-heel estate of his childhood carry titles that are quotes from the Bible. 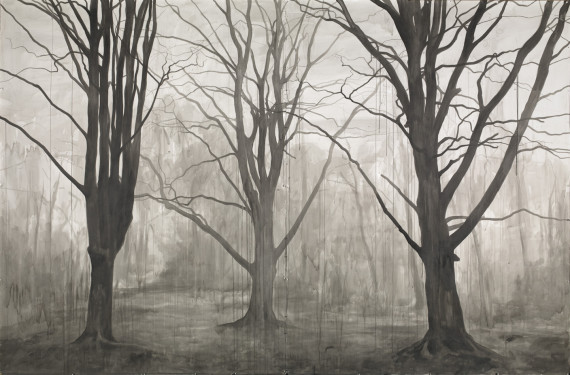 “My last 18 years of painting the landscape where I was bought up, and painting it from a very nostalgic, sentimental point of view, there’s something about all that that I define as self-portraiture rather than landscape,” Shaw says. “It’s an attempt to represent my growing, in the same way that Rembrandt painted self-portraits as he aged.”

His new exhibition, ‘My Back to Nature’, is the culmination of his two-year studio residency at the National Gallery. He is the ninth Associate Artist at the gallery, which invites artists to respond to paintings from the collection.

Tell me about ‘My Back to Nature’, your new exhibition at the National Gallery.
I wanted to explore the woodland back at home that I’d painted many times before, but find within that woodland all the grand themes you find in the National Gallery: sex, death, love, life. One of the paintings I became really fascinated by was Poussin’s The Triumph of Pan, which is a load of people cavorting around. Clothes are dropping off, they’re blowing musical instruments, some people are half men and half goat and there’s drinking vessels and piles of clothes on the ground. And I started to think about these things not in terms of their classical resonance, but in terms of the resonance they had for me as a child growing up in the ‘70s and going in to the woods and finding, not the things you find from BBC’s Country File or Autumn Watch, but piles of pornographic magazines, or old clothing, dresses hanging from a tree, loads of beer cans, a bike that had been set on fire. 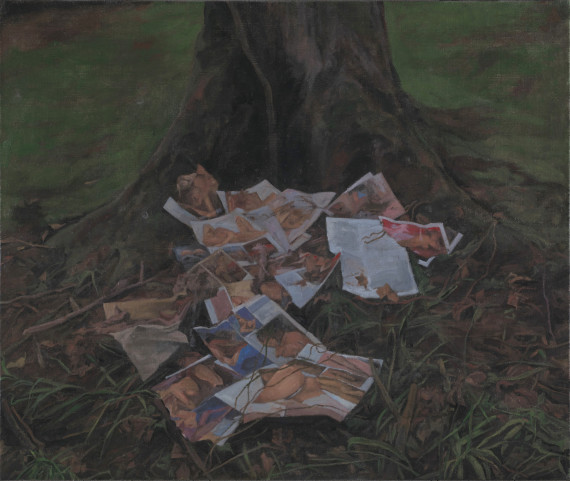 But the earliest works you’ve made during your residency are the 14 self-portraits drawings posing as Christ. How did those come about?
Actually, many people don’t identity them as self-portraits. Or as Christ. Somebody this morning thought they were portraits of Leigh Bowery. They’re based on the positions of the Stations of the Cross in the local church I used to go to. I knew one of the challenges I would face as a resident artist would be in dealing with the image of Christ, because I’ve long been fascinated with it as an artistic model. I’m not a person of faith, but as an artist who deals with paint and charcoal and pencil and paper, the image of Christ as an artist’s model is fascinating. And I knew I didn’t want to copy the paintings, nor have him wondering around in contemporary clothing, like Macbeth in a baseball cap. I also knew that I didn’t want to deal with it as a matter of religious conviction. So to treat the poses of Christ just as you would the poses of a life model was something I was keen on doing. 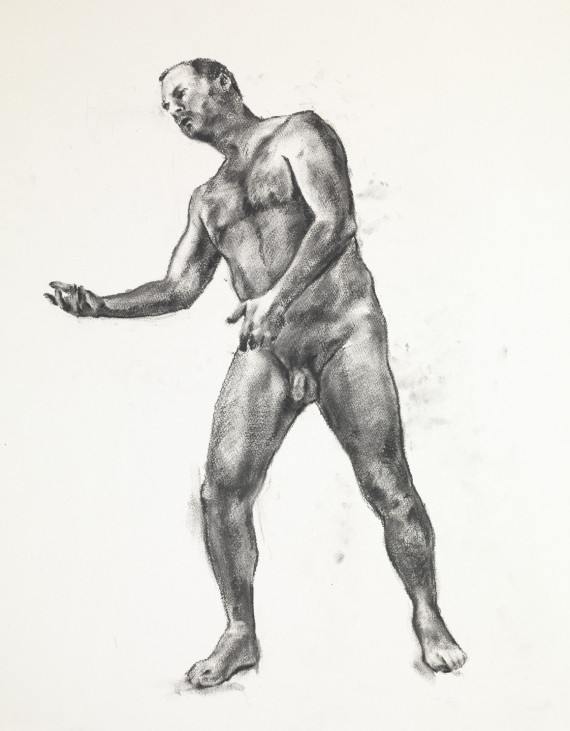 For anyone who knows your work, they might be very surprised at these unexpected, ‘performative’ drawings of you in the nude.
Well, I do have a background in performance art. I did performance and time-based media for my first degree in fine art. I didn’t do painting. And there’s been a long tradition of me doing self-portraiture within my work before I went to art school. I painted a lot of self-portraits, and it’s basically me galloping through the history of artistic styles.

The paintings you’ve painted for this exhibition no longer have that hard, reflective surface they used to. What’s changed?
I used the paint in the same way. The difference is that these are on canvas. The others began on MDF, then I had a flirtation with plywood. I was always using very hard surfaces, treated so they were non-absorbent. But I started to fall in love with Constable and Titian here, and both have a very dry nature to their paint. 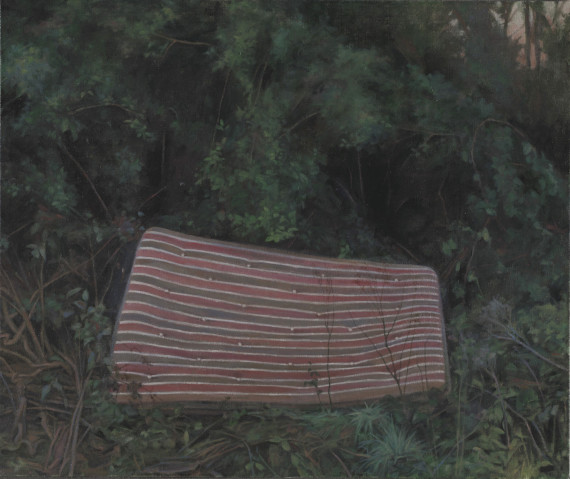 Were you mad about Airfix as a kid?
No, I’ve never made an Airfix kit. When I was a kid, I didn’t want to waste my time with Airfix kits. I wanted to be Rembrandt. I wanted to learn oil painting.

But Humbrol paint restricts you in all sorts of ways – in terms of palette, in terms of the effects you can achieve.
Well, the palette’s massive, actually. But, yeah, it is restrictive. I quite like restriction. Restriction is a great drive toward innovation and economy. And I quite like the fact you have to make up the technique as you go along. I really can’t go and look at a Rembrandt to see how he did it, because he didn’t use the same paints, so there’s a bit like a safety net for me there because I can turn round and say, “Well, Rembrandt didn’t have these bad paints to work with.” But the Humbrol does have its own qualities. 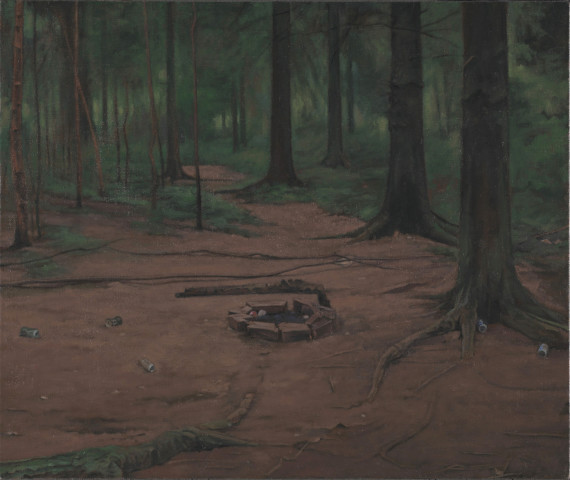 Your titles are often very intriguing. For a time you used biblical titles for your paintings. Does it take you a long time to come up with titles, since they’re clearly important to you?
I love the titles of novels and songs which I’ve never read or heard. I’ve never read The Unbearable Lightness of Being, but I love the title. Nearly every Morrissey track is a great title but I’ve never heard most of them. There’s something beautiful about the world in a line, a world in a painting. 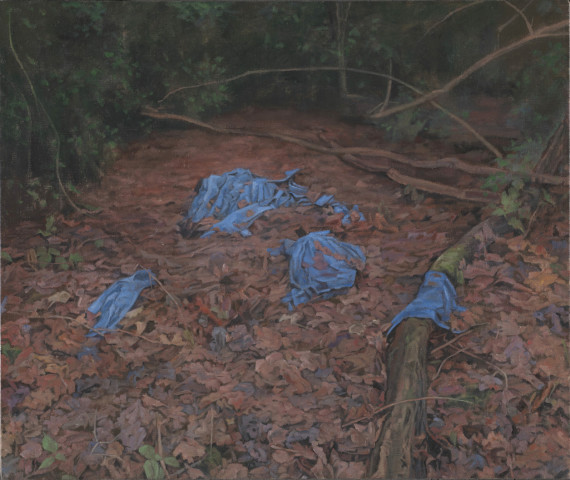 One great English painter you’ve been drawn to is Graham Sutherland. You curated an exhibition of his work at the Modern Art Oxford. What is it about Sutherland that interests you?
There was something about the place, in Pembrokeshire, where he painted some of his best work, that brought out a quality in him that I’ve always responded to. There was a little bit made after that period, when he came back from the South of France in the ‘70s, but I think Sutherland’s mistake was to believe he was a cosmopolitan artist, and to go off and hang around with Picasso. Whereas someone like Paul Nash just stuck it out, and became a very interesting painter. I think there’s something about finding the universe in something quite small and knowing that thing very well.

You’ll be 50 in September. Do you think this will milestone for you as an artist?
I’m hoping that when I turn 50 I’ll start making really great paintings. I think painters traditionally make interesting work as they get older. You don’t want to look at the paintings of a young man, you want to look at the paintings of an old man: the last Hopper, the last Bonnard, the last Van Gogh, the last Rembrandt, the last Titian. And late Velázquez and late Monet. Bacon went a bit off, but even some of Bacon’s last stuff is really interesting. 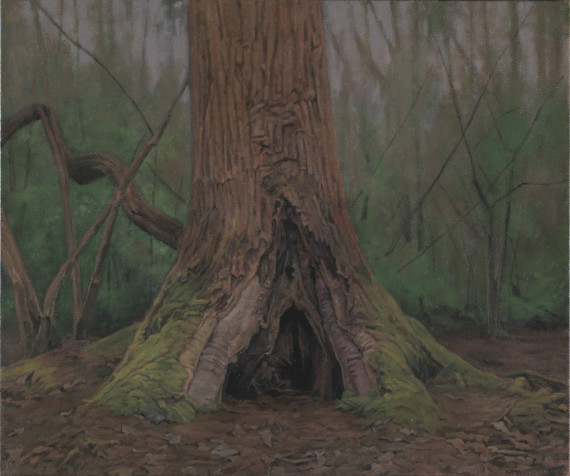 What did it feel like to be nominated for and not win the Turner Prize?
Without sounding like a complete tosser, I am going to say that being nominated is a bit like winning. It was very special. It just meant I didn’t have to make an idiot of myself making a speech. If it was more money I might have been pissed off, but it’s a fucking insult to be honest [laughs]. When you think what a snooker player wins – for fuck’s sake. They’re always talking about how to rejuvenate the Turner Prize. Make it £100,000, that’d fucking rejuvenate it.

George Shaw: My Back to Nature, The National Gallery, London, 11 May – 30 October 2016. www.nationalgallery.org.uk