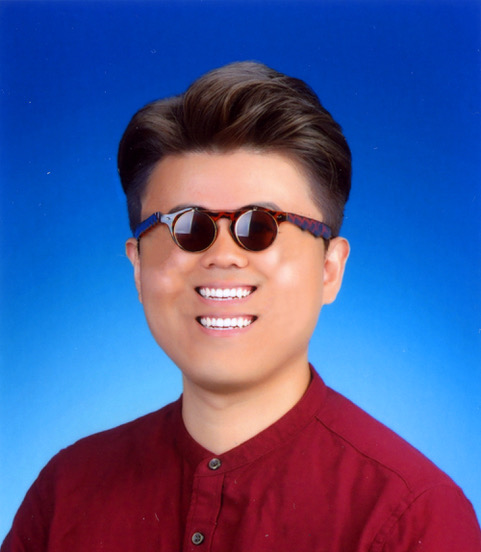 Four years ago Hong Kong artist Wong Ping had never exhibited in a gallery space. The self-taught animator worked a day job at a broadcasting station, spending his evenings creating videos in his bedroom and uploading them to his blog.

His sexually explicit and socially critical videos, which are rendered in eye-popping technicolour, often take the form of childlike fables. Since first exhibiting in a public space in 2015, his meteoric rise has included showing work at the Guggenheim and New Museum in New York, while his first major solo show took place at Kunsthalle Basel earlier this year.

Last year he exhibited at Frieze Art Fair, London, where he was picked as the inaugural winner of the Camden Arts Centre Emerging Artist Prize.

As part of the award he was offered a solo show at Camden Arts Centre, which opened earlier this month across two sites – the organisation’s main venue in north London, plus a separate space on Cork Street, Mayfair.

Here he discusses how the show came together, the narratives behind his work, what viewers can expect, and the benefits of living a nomadic existence without a permanent base. 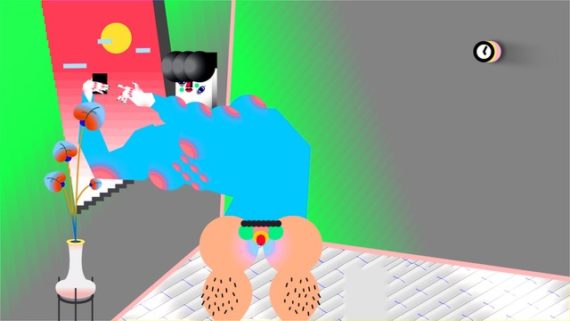 What type of work can visitors expect at your show?
Although I’m exhibiting existing work rather than new video work I produced specifically for the show, it is displayed differently. The main room in the arts centre features Dear, Can I Give You A Hand?, which was previously shown at the Guggenheim last year. But here it is presented on top of a pile of toy false teeth, which is different to before. So, in some ways, I would describe it as site specific because the set up changes each time it is displayed.

Then in the reading room there’s my work Boner, which is a giant column which sticks out from the inside of the arts centre to the outside, where there is a massive rotating heart on the roof. On the inside there is a video projected onto it called Who’s the Daddy, which is a work I made in 2017.

Martin Clark, who is director of Camden Arts Centre, also suggested I use the venue’s garden, and I immediately thought about burying something. So I created a heart-shaped grave containing a dismembered giraffe. That is actually where the title of the show, ‘Heart Digger’, came from. 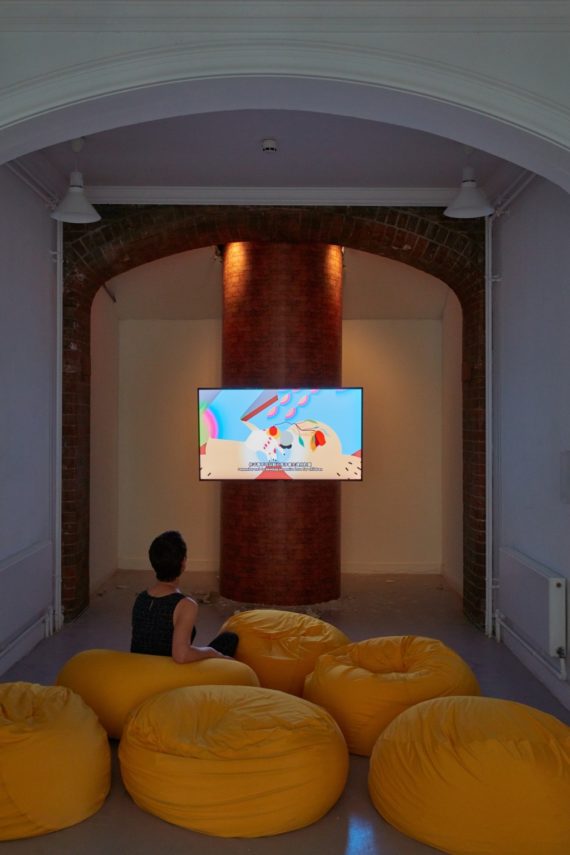 The show is split across two sites. What challenges did this throw up in terms of curation?
The two sites are quite different, with one being an arts centre with traditional white box spaces, plus the garden. In contrast, Cork Street is almost like a construction site, which is quite dark and rough. But personally I prefer the latter as I’ve always enjoyed doing shows in such raw surroundings as they have more character.

The most challenging aspect was the amount of time I had to make so many decisions on both sites. We actually started planning the second space quite late. We initially only planned the main room in the arts centre, and then Martin came to visit me in Hong Kong in March this year when we discussed the reading room and the garden. Then only two months before the show opened I flew over and looked at the Cork Street space.

It was a little bit stressful, but Camden Arts Centre were really helpful in terms of technical issues such as how deep I can dig a hole in their garden. Also, because most of the work was already made it was ultimately decisions about placement. So, although it was a pretty short timeline, it came together quite quickly. I even dug the hole in the garden myself! 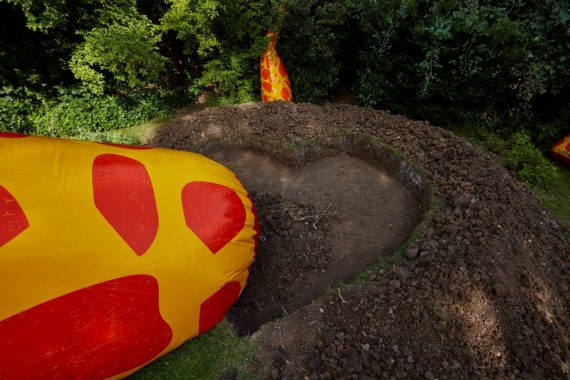 Does this pace reflect your art career in general? Your first exhibition in an art gallery was only four years ago.
Well, it has been very exciting but also sometimes a little bit scary. I’m not from a visual art background and so sometimes it can feel a little overwhelming. Before 2015 I was working for a broadcast station in Hong Kong and only making art work in my bedroom in the evenings. That year was the first time I ever exhibited my animations in a physical space.

Everything still feels new and some of it would probably seem quite obvious to someone who has that art background. My knowledge of the contemporary art scene was quite limited, and I only really started looking at other people’s shows once I’d started exhibiting myself. I’m still not that familiar with other people’s work.

Do you think that is what makes your work so interesting?
I think people in the art scene have different backgrounds as well, so not necessarily. 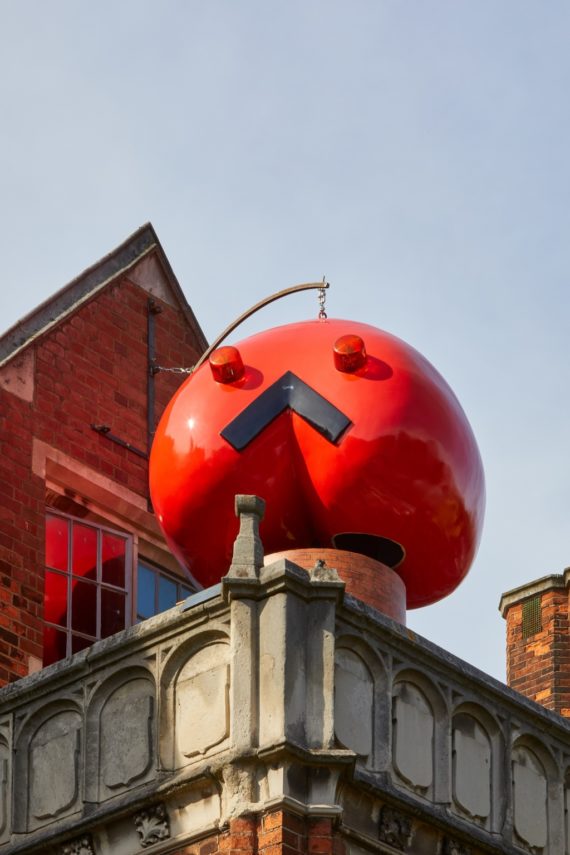 How does it feel to be the first recipient of Camden Arts Centre’s emerging artist prize?
It is nice to have that recognition because it gives you confidence that others respect what you are doing.

There are a lot of sexual references in your work. Why is this?
If you look back at the work I was making on the internet pre-2015, sex has always been present in my practice. But I wasn’t aware that sex was such a big deal for people until I started showing in galleries. For me, it is just a part of everyday life that people do often. It is quite a usual thing to do, a bit like eating dinner and going to a movie.

Sex is quite funny and enjoyable, yet when I started showing in physical spaces people would ask me why I use it. I realised sex is the language of my work. I’m not trying to offer advice on how to have good sex and make love, but rather it is a way to tell a story. A collector recently suggested I translate the voiceover in one of my works from Cantonese into English, but I said why bother – sex is already an international language.

Can you say a little more about your ongoing series Wong Ping’s Fables?
Last year, the two shows at the New Museum and Guggenheim happened in really quick succession. So I wanted the works in both shows to share certain aspects, and I created Wong Ping’s Fables. I’ve always had an interest in writing for kids, whereas animation was more of a vocation and hobby. I set myself a challenge of making some work that was aimed at children, with no blood or sexual elements. So I went to the library and did some research into old time fables, such as Aesop and the Brothers Grimm. 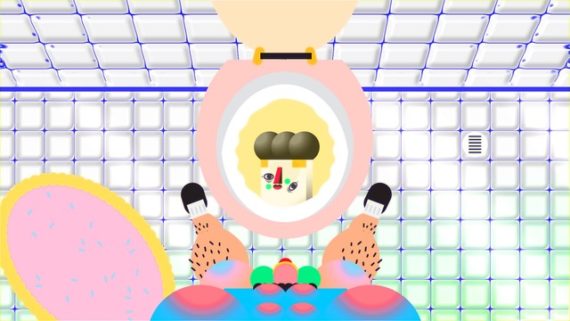 I found their format quite interesting, such as having little fables that take up a half page, with the second half offering a review of the moral lessons we’ve learnt from the story. It’s like a movie, but it also containing a movie spoiler right at the end. I thought it would be interesting to make something that is more honest for kids today, so taking the fable of rabbit and turtle, but simply saying ‘don’t be lazy’. I’d initially thought about publishing a book, but decided to animate it. It was supposed to be a very clean visual, with no blood for example, but with a sense of darkness still contained in the actual story, which is a difficult thing to do.

Is there a diaristic element to your work?
Always. But in many ways the practice I’m working with gives me an unstable mindset because I don’t have consistent research that is pointing to anything specific. So, for example, some artists might make work that deals directly with climate change, but I just wait for things that I am interested in talking about. So in that sense I don’t have a particular direction and cover a lot of things, but it does mean I can directly respond to life as it happens.

What impact do you want your work to have on the viewer?
It doesn’t matter what I’m talking about, whether it be political, social or personal issues, I always question the impact I am having on the world and why I am doing certain things. At times it can be frustrating. When people talk about art having a higher responsibility, I doubt that it can do it. In the modern world the impact seems to come more from the internet and social media.

Why do you use humour and cuteness in your work?
There has been so much talk and debate online about the political climate in not just Hong Kong, but also America and the UK in terms of Brexit. I guess I have tried to take another way. My work is like candy wrapping paper, containing a mix of humour and cuteness that makes these difficult issues easier for people to swallow and digest. 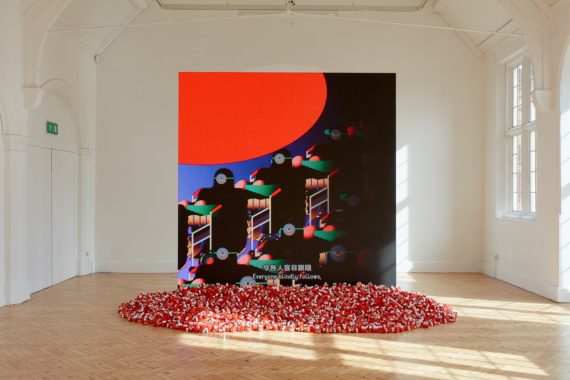 When I first started exhibiting I found it really funny when people were laughing at work that was actually saying something quite sad and depressing. They were taken in by the visuals. This actually made me think I could be even more open and honest because people wouldn’t necessarily take it seriously. I think my mentality is the same as when I was making stuff in my bedroom and putting it on my blog. Comments from people online can be good or bad, but I enjoy both.

You are not currently based in one place, but rather temporarily staying in different areas depending on where you are showing. How are you finding this nomadic existence?
I’m not sure I’ve ever found a place that I’ve felt I really belong to, but I’d planned to move for many years, even before the Umbrella Revolution in 2014 [pro-democracy demonstrations in Hong Kong] because of the political atmosphere that was already there. I guess part of it is now wanting to experience other cultures and seeing how that affects my work.

I don’t actually have a permanent residence in Hong Kong now so I’m floating around and following my shows, staying in Airbnbs. Last year I threw away about 80% of my stuff and put the rest in storage, so even when I go back to Hong Kong I’m a little bit like a tourist. It’s really refreshing. 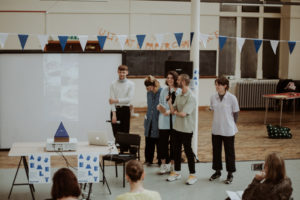