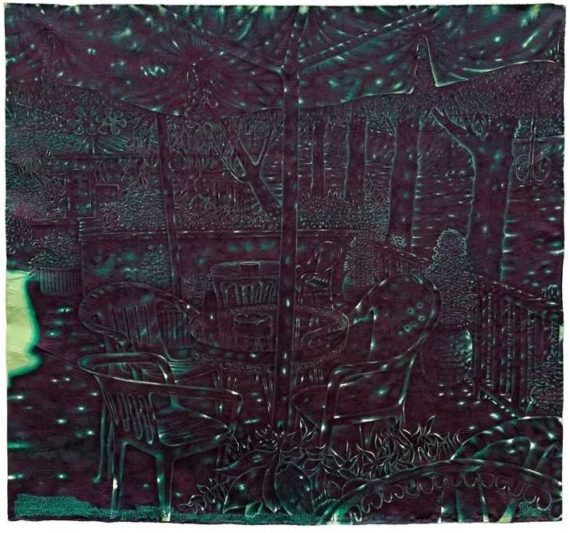 A dark and mysterious painting by Essex-based artist Gary Lawrence has been voted the winner of the John Moores Painting Prize Visitors’ Choice Award 2018.

The work, entitled Kos Town Paradise Hotel Front Terrace, was chosen after 16,000 votes were collected from visitors to the exhibition at the Walker Art Gallery, Liverpool. Lawrence will receive a cheque for £2,018 in prize money.

The win continues a successful period for the artist. Last year Lawrence became the only artist to have won the Jerwood Drawing Prize twice, following earlier success in 2011, and in September he was the runner up in its latest incarnation, the Trinity Buoy Wharf Drawing Prize.

A number of visitors shared comments on why they voted for Lawrence’s work. One said: “When you glance at it all you see is black, but as you stare, a picture forms. So clever, it reminds me of people – you don’t see someone’s true colours right away, it takes time for them to open up.”

Another said: “The way the artist uses very few colours to depict the terrace is extraordinary. The white lights attract the viewer and the green completes the outlines. Entrancing.”

Commenting on the process of the Visitors’ Choice award, Lawrence said: “It is always eye-opening to get feedback on one’s work but an acknowledgement such as this award is very humbling. Being part of this John Moores exhibition has been terrific.”

Sandra Penketh, director of art galleries at National Museum Liverpool, described Lawrence’s winning piece as “almost supernatural. It is a painting that is otherworldly, yet if you give it a few moments, its subject matter is revealed. Lawrence’s minimal colour palette, materials and the technique he uses demands that the viewer be active in deconstructing what they are looking at, almost like a slight of hand, transforming a mundane scene. It is clever and witty.”

This year, the John Moores Painting Prize celebrated its 60th anniversary by selecting 60 paintings from over 2,700 entries for the show. Its jurors included the artists Marvin Gaye Chetwynd, Lubaina Himid MBE, Bruce McLean and Liu Xiaodong, and curator Jenni Lomax.

In July, Devon-based artist Jacqui Hallum was announced as the winner of the prize. She received a £25,000 first prize, a three-month fellowship at Liverpool John Moores University, plus an ‘in-focus’ solo display at the Walker Art Gallery in 2019.