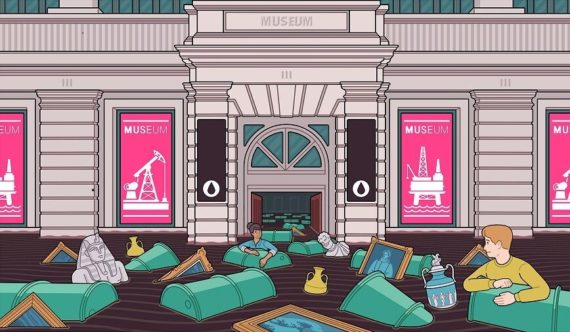 A group of 40 leading scientists have submitted a formal complaint to the Science Museum over its sponsorship agreements with oil giants BP, Shell and Statoil. They are accusing the museum of ‘undermining its integrity as a scientific institution’ due to the companies’ continued contribution to climate change.

Coordinated by research and campaigning group Culture Unstained, the complaint accuses the museum of breaching its own ethics policy and undermining its relationships with key stakeholders, including scientists and young people. It also claims the museum knew about its sponsors’ ties to corruption and climate disinformation but signed the deals anyway.

The complaint, which was submitted via email, recommends that the Science Museum Group ends the relationships as soon as is legally possible.

Among the high-profile names to have signed the letter are naturalist and broadcaster Chris Packham, Professor of the History of Science at Harvard University, Naomi Oreskes, and environmentalist and writer Sir Jonathon Porritt. In addition, Dr James Hansen, the climate scientist who first warned the US Senate about global warming in 1988, has also offered his backing.

Simon Clydesdale, oil campaign leader at Global Witness, commented: “The people at the top of the Science Museum clearly think it’s important to know where their money comes from, as they conducted due diligence reports on all three of these oil companies. It is baffling that they could think that money from Shell, a company embroiled in one of the biggest corporate corruption scandals of all time, was clean enough to take.”

The Science Museum’s official due diligence reports revealed that it did know about ‘multiple instances of pollution, corruption and links to climate denial’. However, it ‘did not judge them to be in conflict with its responsibilities as a trusted science institution’.

Jess Worth, co-director of Culture Unstained, said: “The Science Museum is engaging in a form of everyday climate denial by continuing to promote the brands of three oil companies while being fully aware of their colossal climate impacts and unethical business practices.

“At a time when major cities are launching legal action against these same companies for their contributions to global warming, it is inexcusable for a museum of science to help them pose as ethical and responsible when we are in the midst of a crisis they are actively exacerbating.”

The complaint also highlights a ‘gagging’ clause in the museum’s contract with Statoil that could potentially limit the museum’s freedom to accurately communicate the causes of climate change. It states that Science Museum staff and trustees must avoid ‘discrediting or damaging the goodwill or reputation of the sponsor’.

“While I acknowledge the passion of campaigners who would rather we turned our backs on a variety of legitimate business sectors, I strongly believe we are making the right decisions to secure the long-term future of the museum for the public good, a stance agreed by the board of trustees.”

This isn’t the first time that the Science Museum has faced scrutiny over the influence its sponsors’ have over exhibitions. In 2016, emails released under the Freedom of Information Act revealed how Shell had attempted to influence the curating of the museum’s climate science exhibition ‘Atmosphere’. Later that year, more than 50 scientists, politicians and campaigners signed a letter to The Guardian calling on the museum to drop Statoil as the main sponsor of its interactive gallery for children, ‘Wonderlab: the Statoil gallery’.

Chris Packham said: “I particularly dislike the fact that petrochemical companies are trying to influence young people. The idea that they have influenced the structure and shape of Science Museum exhibitions is insidious. I can’t imagine there aren’t alternative sources of funding out there. The museum should be looking forward and not just accepting the status quo.”