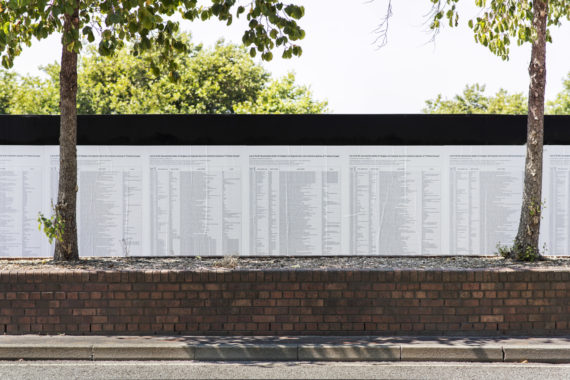 Work at Liverpool Biennial listing names of dead refugees and migrants destroyed Istanbul-based artist Banu Cennetoğlu‘s The List was produced for World Refugee Day and featured the names of the 34,361 refugees and migrants who have lost their lives trying to reach Europe since 1993. It was also published by the Guardian as a special supplement in June.

Cennetoğlu has been producing, in collaboration with art workers and institutions, versions of The List using public spaces such as billboards, transport networks and newspapers, since 2007. The information has been compiled and updated each year by UNITED for Intercultural Action, an anti-discrimination network of 550 organisations in 48 countries. However, this was the first version Cennetoğlu had distributed in the UK.

Although it had been posted on hoardings outside a building site on Great George Street with the permission of developers, early reports suggested a council worker may have mistaken the work for illegal flyposters and taken it down. However, this has been denied by Liverpool City Council.

As the Guardian reports, Liverpool Biennial said in a statement: “It is timely and important to make The List public during a global refugee crisis. We were dismayed to see it had been removed on Saturday night and would like to know why. The List has been met with critical acclaim and we are doing everything we can to reinstate it.” 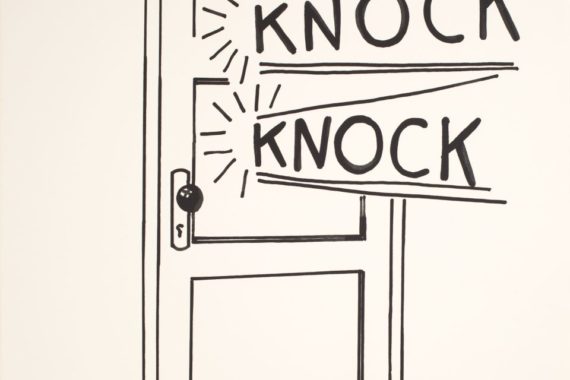 Programme for South London Gallery’s new space in a former fire station announced Located across the road from the gallery’s main building, the new space includes exhibition galleries, an archive, communal kitchen, education space and artist studio. Opening on 22 September, its inaugural exhibition is entitled ‘KNOCK KNOCK’ and will be curated by the gallery’s director Margot Heller in collaboration with artist Ryan Gander.

The show will explore humour in contemporary art and include work by over 30 artists, including high-profile names such as Maurizio Cattelan, Sarah Lucas and Ugo Rondinone, plus emerging artists including Danielle Dean, Hardeep Pandhal and Simeon Barclay. The exhibition will feature painting, drawing and sculpture to collage and film.

In addition, three off-site artist projects will be showcased on the gallery’s opening weekend. These are part of Open Plan, the gallery’s ongoing public art and education programme that sees international and British artists creating artworks with its neighbours on local housing estates.

This includes a large-scale text piece by artist Jessie Brennan installed on the roof of Heron House on Pelican Estate, plus Basim Magdy’s collaboration with local children to transform Art Block, the gallery’s free children’s space on Sceaux Gardens Estate. In addition, Gabriel Lester’s sculptures will be installed on the paved area below Crane House on Pelican Estate.

Getty Foundation awards National Gallery grant to teach art conservation skills The London-based gallery will receive more than £70,000 to share the conservation techniques used on paintings such as Anthony Van Dyck’s Charles I portrait. External conservators will be invited to share work that needs to be done on the painting, including removing its old lining and applying a new one.

Explaining the urgent need for the Conserving Canvas project, Deborah Marrow, director of the Getty Foundation, said: “We heard that there is a growing skills gap between senior conservators who learned treatments of paintings on canvas decades ago and newer museum conservators who need to address pressing problems for paintings in their own collections.”

Additional grant recipients include the University of Glasgow which will receive £115,000 to hold training workshops on five paintings from the Scottish national collection, including Sir Joshua Reynolds’ portrait of Lady Maynard. There is also funding for Yale University and the fine arts museums in San Francisco, plus galleries in Sweden and the Netherlands.

Pussy Riot members arrested at World Cup final in Moscow released then immediately detained again Petya Verzilov, Nika Nikulshina, Olya Kurachyova, and Olya Pakhtusova were arrested after running onto the pitch during the France and Croatia game dressed in Russian police uniform. They were detained for a second time moments after their release due to “the organisation and holding of public events without prior written notice”.

However, a few hours later an order was issued for them to be released after their appearance in court was postponed. The group posted on Facebook: “Our dear 4 activists are ON FREEDOM now. They still will have to come to court and still can get another 25 days, but now they’re free.”

Russian authorities order the destruction of digital print by the art collective Rodina Entitled 9 Stages in the Decomposition of the Leader, the work is a print featuring nine time-lapse digital images showing the disintegration of a photo of president Vladimir Putin. The print was seized after it was carried by artist and activist Varya Mikhailova at a trade union march last May Day on Nevsky Prospekt in St Petersburg.

Max Evstropov, a member of the art collective Rodina, said: “The funny thing with the court’s decision to destroy our artwork is that it is digital, so physical destruction means nothing. The huge police state is rather awkward.”

Along with ordering the destruction of the print, Mikhailova was fined 160,000 rubles ($2,500). However, activists have quickly responded by printing the image on posters, t-shirts, and tote bags, and selling them online. They are claiming they’ve already made enough money from the sales to cover Mikhailova’s fine.

Images:
1. The List of 34,361 documented deaths of asylum seekers, refugees and migrants who have lost their lives within or on the borders of Europe since 1993. Documentation as of 5 May 2018 by UNITED for Intercultural Action. Facilitated by Banu Cennetğlu. Presented at Great George Street, Liverpool Biennial 2018. Photo: Thierry Bal
2. Roy Lichtenstein, Knock, Knock Poster, 1975, line-cut, in black, on Arches paper, 65.4 x 47.6cm. © Estate of Roy Lichtenstein/DACS/Artimage 2018