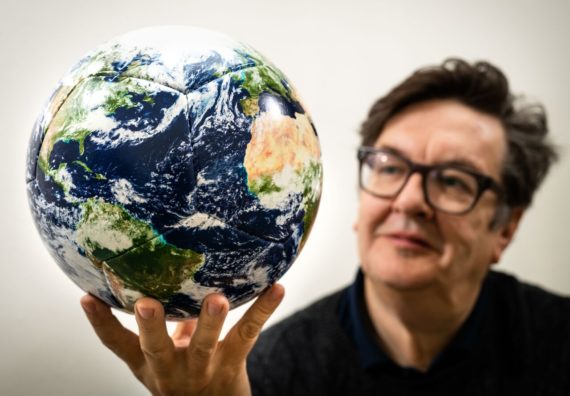 Mark Wallinger reveals new artwork inspired by first world war Christmas truce Co-commissioned by Liverpool Biennial and 14-18 NOW, the UK’s arts programme for the first world war centenary, One World was inspired by the famous Christmas truce of 1914, when soldiers from both sides emerged from the trenches and met in No Man’s Land to exchange gifts and play football.

The Turner Prize-winning artist also took inspiration from the famous image of the Earth taken during the Apollo 8 lunar orbit on 24 December 1968. A limited edition of the One World football will be released this month to community football projects across the UK.

Explaining the project, Wallinger said: “It is 100 years since the Armistice was agreed in 1918, and 50 years since the Earthrise photograph was taken on Christmas Eve 1968. One World is my contribution to the legacy of those precious moments – spreading a message of peace for the world. Time to stop fighting and start playing. Playing the beautiful game. Let’s take that image of a precious and fragile world into the future and celebrate the joy of playing together.”

The Scottish arts funding body was forced to perform a U-turn earlier this year after it faced heavy criticism over its funding decisions. Chief executive Janet Archer resigned shortly after, with the body announcing it would be reviewing the way it provides long-term funding.

Appearing before a Holyrood culture committee this week, interim chief executive Iain Munro and chairman Robert Wilson denied the new guidance on ‘acceptable conduct’ was an attempt to silence critics.

Wilson said: “It’s been a very bruising experience for the staff at Creative Scotland who are committed to what they do and do that with much diligence and care. We have had instances of what I would call unacceptable behaviour for anybody in any form of public life which has strayed into people individually, as staff members of Creative Scotland, being abused in a very open environment, not even in a closed setting, which in itself would be a problem.

“We have set standards in the way that we operate which we would want to see reciprocated within the sector in terms of trust and confidence and mutual respect. Whilst we might not always agree, the business of Creative Scotland is delivered by people and people are at the heart of it.”

German chancellor Angela Merkel calls for more women in the arts The comments came after a German government-commissioned study last year found that of women employed in the German cultural workforce, only 21% hold top management positions at media companies and 16% are in decision-making positions in significant cultural departments.

Merkel said: “Whoever cares about diversity cannot accept that women still earn considerably less than their male colleagues. Let’s ask ourselves – how many female conductors have we experienced? How many women rank among the top-selling painters? The answers are rather sobering. This means we need real equality of opportunity for men and women in arts and culture.”

Venice museums reopen after worst floods in 10 years Institutions including The Peggy Guggenheim Foundation and the Prada Foundation were closed after floods hit 75% of the city due to an exceptional high tide, causing water levels to rise by more than five feet. Although Venice’s Architecture Biennale was closed, its venues were not effected, with 3,000 visitors to the event the following day.

According to La Stampa newspaper, a system of retractable gates in the lagoon that will shield Venice is due to be completed in 2022.

As the Guardian reports, the 58-year-old artist has been a full-time carer until recently, and was unknown before the award announcement. She has not been accepted into a painting prize before, and her winning piece is her first oil painting and portrait, but she has ‘dabbled in drawing and other things’.

Artist defends appropriation of a fellow artist’s work without permission In 2015, Heba Y. Amin, Caram Kapp, and Don Karl responded to a call from the television series Homeland for ‘Arabian street artists’ to create authentic graffiti for the film set at their Berlin location. However, the real reason for taking on the opportunity was to ‘hack’ the series, with Amin, quoting an article in The Washington Post, describing Homeland as ‘one of the most bigoted shows on television’.

The move was widely publicised, with coverage coming from media outlets including CNN, Al Jazeera, the BBC, and The Late Show With Stephen Colbert and The Tonight Show With Jimmy Fallon. However, all three artists were shocked to discover the work was for sale at this year’s Berlin Art Fair. David Krippendorff, represented by German gallery Katharina Maria Raab, reproduced the images and their titles, screen printing them in gold.

As Hyperallergic reports, Krippendorff initially claimed he did not know the graffiti in Homeland was the work of practicing artists. However, he then backtracked, saying: “Had I known there were artists among the sprayers, I would have done the work anyway.”

In an email to Hyperallergic, Amin responded: “This is much more than about plagiarism. It is about cultural entitlement that has been enforced over and over again. I am not interested in waging a war against the artist, but rather question why it didn’t occur to him that this was so problematic.”