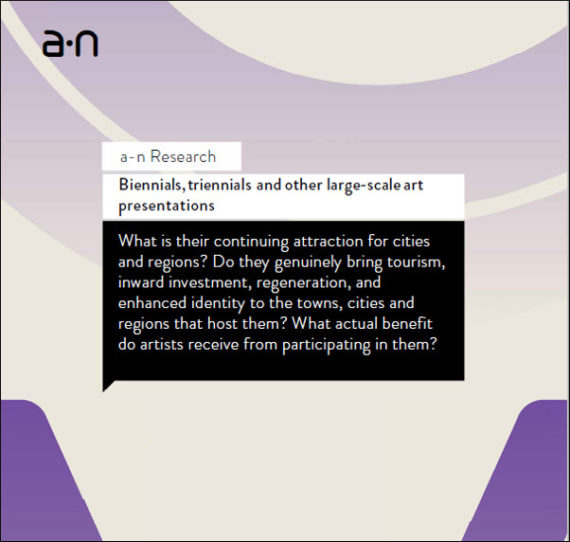 The popularity of large-scale presentations of art continues to endure. And while it has been a busy year already with events such as Glasgow International, Manifesta, the Berlin Biennale and Liverpool Biennial, there are still many more to come before the end of 2018. These include the 33rd Sao Paulo Biennial opening on 7 September, the Shanghai, Taipai and Gwangju biennials, and the Asia Pacific Triennial. The third MKH Biennale in Germany, this year guest curated by a-n’s Pippa Koszerek, opened at the end of August.

What though is the continuing attraction for cities and regions of such large, periodic art presentations, and what is it that makes artists, curators and civic authorities invest in them edition after edition? Do they genuinely bring tourism, inward investment, regeneration, and enhanced identity to the towns, cities and regions that host them? And what actual benefit do artists receive from participating in them? How does that benefit accrue and are some more beneficial than others?

These are big relevant questions for the visual arts, and a-n Research hosts several weighty papers that explore a range of responses to them. In particular, we have an emphasis on recent UK experiences – the Cultural Olympiad, Liverpool ’08, Hull City of Culture, and the UK’s biennials.

The University of Hull, which was engaged to evaluate the impacts of Hull’s experience as City of Culture in 2017, has begun to process the wealth of empirical evidence it gathered during that year. It has now published the initial findings, Cultural Transformations: The Impacts of Hull City of Culture 2017, written by Professor Franco Bianchini.

Evaluating under several themes, it shows that Hull’s year in the spotlight was a huge success on several measures. But by necessity it takes time to explore and understand longitudinal impacts; when those are published we will publish them on Research as well.

The much bigger European Capital of Culture year, which was awarded to Liverpool and took place in 2008, is also well represented. It spawned several research papers focusing on different aspirations for the year, from its impact on the local arts ecology through to its economic impact and the transformation of Liverpool’s national image. We have published the overview report, Liverpool’s experience as European Capital of Culture, as well as several related documents from the Liverpool Arts Regeneration Consortium project.

Liverpool also features in several other research documents. You can find evaluations of the Liverpool Biennial, now in its tenth edition. For an independent exploration and critique of the theory behind biennials of art and their interface with public policy, my own MPhil thesis, Destination Biennale, provides a history of the development of biennials and their appropriation by civic and economic agendas.

Using three case studies – the Liverpool and Istanbul biennials, and the Folkestone Triennial – I argue that it is the legitimisation by public policy agendas allied to strong artistic leadership and aims, that provides the best conditions for biennials to thrive and be of worth to participating artists, local arts ecologies, and residents.

Do biennials of art benefit exhibiting artists and if so, how? There is no single answer to this, but we host an interesting paper from Arts Council Wales that looks at the value and impact for the visual arts of the ‘Wales in Venice [Biennale]’ project. It found that participation makes a big difference to individual artists’ work, aspirations, creative ideas and career development opportunities, while also reporting a range of concerns about how artists were selected for the opportunity.

Probably the biggest cultural event the UK has hosted in recent years is the 2012 Olympics and its accompanying Cultural Olympiad. A coordinated national programme of often very large art projects took place around the country and considerable  extra funding was pumped into the sector.

Revealing the impact that properly supporting the arts can have, the resulting evaluation by the Institute of Cultural Capital showed that it was an enormous success. If you’re interested in knowing what happened to the Olympic Park and the claims for regeneration that were made prior to the Olympics, a related paper, Inspired by 2012, published in 2016 by the DCMS, gives a useful update.

This is just a snapshot of some of the resources that a-n holds relating to large-scale international art events. The aim is for artists to benefit from the in-depth knowledge these offer of specific events and the agendas behind them, in order to understand the relevance and use to artists’ own practice. For arts organisers, these papers often function as markers of good practice and indicators of mistakes to avoid, in their own work on particular events or if initiating something new.

More on a-n Research: access over 250 research documents and publications at www.a-n.co.uk/research