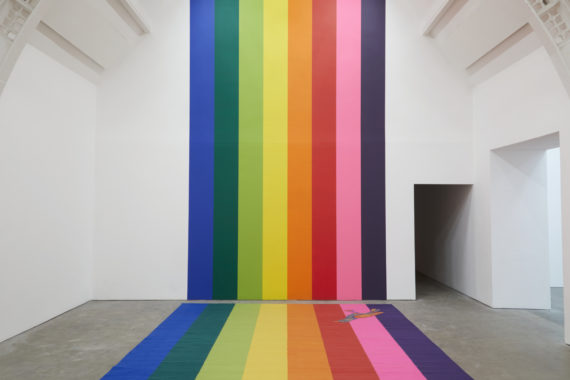 Polly Apfelbaum: Waiting for the UFOs (a space set between a landscape and a bunch of flowers), Ikon, Birmingham
This exhibition of New York-based artist Polly Apfelbaum’s work features large-scale colourful installations of textiles, ceramics and drawings. Exploring the legacy of post-war American art, her site-specific works also hint at the vast empty spaces of the America landscape. Apfelbaum is keen to examine the temporal experience an audience has with an exhibition – something that is enhanced by a number of the works being painted straight onto Ikon’s walls.
Until 18 November 2018. www.ikon-gallery.org 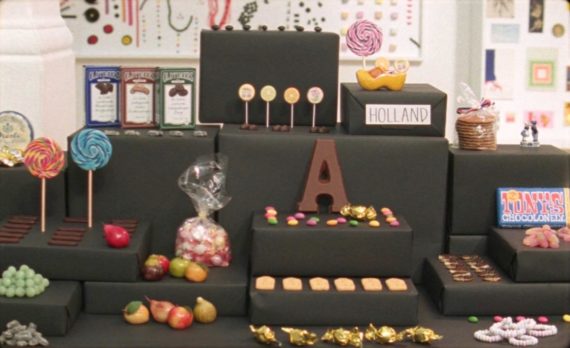 Ulla von Brandenburg: Sweet Feast, Whitechapel Gallery, London
This new film by the Paris-based German artist Ulla von Brandenburg was created with children from the Arnhem Wharf Primary School and recreates an infamous event that occurred at Whitechapel Gallery in 1973. 500 school children were invited to the gallery to learn about sweets as popular art, with the enticing display of confectionary part of the ‘Fanfare for Europe’ celebrations, marking Britain’s entry into the European Common Market. It included everything from French lollipops shaped as the Eiffel Tower, to Italian marzipan fruits and licorice from Denmark. However, the presentation proved all too much for the children, who overwhelmed a guard and began devouring the sweets. With the uncertainty caused by Brexit and its impact on future generations’ access to other cultures, Brandenburg’s show offers a reminder of more innocent times.
Until 31 March 2019. www.whitechapelgallery.org

Conrad Shawcross, Victoria Miro Gallery, London
Royal Academician Conrad Shawcross’s latest exhibition features a series of sculptures and mechanical works. The focal point is three new pieces, entitled Fractures, which feature twisting spines and branches with fragments made from various materials hanging off them. Also on show is a sequence of photographic prints created by firing a laser through a series of faults in fragments of glass.
Until 27 October 2018. www.victoria-miro.com 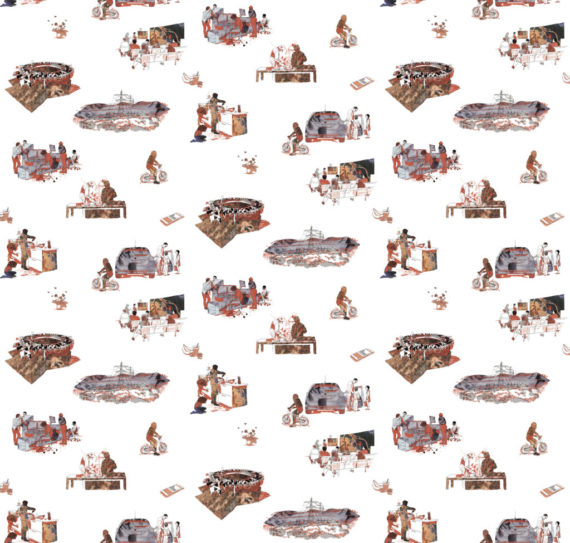 Future Knowledge, Modern Art Oxford, Oxford
A group exhibition exploring the role of visual culture in raising awareness of the effects of climate change, ‘Future Knowledge’ includes a diverse range of different artwork and prototypes by a variety of artists, designers and thinkers from different disciplines. Highlights include Tania Kovats’ steel and salt sculptures which reflect on the theory that Earth has one interconnected, self-regulating ocean. Elsewhere, Eline McGeorge’s montage and weaving works reference an environmental cycle of damage and repair, while Lucy Kimbell has created a prototype for domestic wallpaper that changes colour over time in response to air pollutants.
Until 28 October www.modernartoxford.org.uk

Trace Ingredients, Inverness Museum and Art Gallery, Inverness
This group show features work by three collaborative duos: Thomson and Craighead, Alexander and Susan Maris, and Cat Meighan and Clive Brandon. It takes an intriguing approach to exploring the shifting demographic of the Scottish Highlands – through the medium of food. Included is Thomson and Craighead‘s Saffron, a portrait of Kasia Pogo who runs the oriental food shop in Inverness’ Victorian Market. Maris’ work features a series of kettles which were previously used to collect water from each of the 21 named rivers on Rannoch Moor. Finally, Meighan and Brandon contribute a new installation that includes prints, paintings and a guide book featuring hand-drawn maps, photos and text of lemonade production sites.
Until 17 November 2018. www.highlifehighland.com