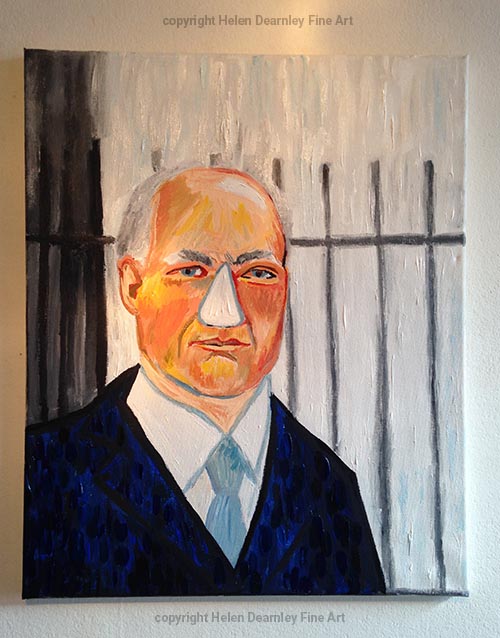 I’ve spent the last week in a state of inability to work. Then the Referendum, which has taken over everyone’s world, came to its head, and as I passed the old abandoned mental asylum yesterday, going online is like looking in through its windows to see some scenario from One Flew Over The Cuckoo’s Nest being enacted on reality.

Every now and then, I’ve been online on twitter doing small bits of self promotion for my work and the exhibition.

Where “friends” and “family” then erroneously respond to posts that aren’t meant for them, and in negative ways.

One of them was along the lines of “I don’t like the idea of an Ian Duncan Smith sculpture, but I prefer your Simulacrum” – obviously someone that has read a tweet, hasn’t paid attention to the actual work when I’ve shared links to my website or the City Arts website, and hasn’t been to see it to know that it’s a painting, not a sculpture!

I don’t mind if people don’t like the work, but social media is for us to share work to a wide variety of people, some of whom may like it and buy it!

So I posted an off-the-cuff status basically telling them that if they don’t want to buy my work, or support me or my practice, they are free to ignore my posts or unfriend me.

Instead, I’ve been told by an aunt that she never intends to buy my work and that “I’ll never have any friends with that attitude” – well, that attitude has protected me against abuse for many years, thank you, and I had to unfortunately unfriend one of the two people that had taken the time and trouble to tell me how, when he was unhappy with his job, he got another job doing something else.

We artists encounter this all the time, but here, he has failed to understand that I already do 3 unpaid jobs, so I don’t have time for another, and I also wasted an hour applying for a job working in mental health support for young adults, which was rejected. So I’d like to think I could maybe give up my degree and maybe go and be a qualified mental health nurse, perhaps, but that would require undertaking medical training etc.

Amidst family divisions, a general sense of impending doom, fears for my future as an artist, and as a carer, for my kids’ future, I received a message from another artist about a possible project in the pipeline, which I would be interested in if funding is successful.

And I’m also now qualified in Emergency First Aid at work, which is a useful skill to add to my bow, but if you choke on a nut, you’re still probably dead, as I found that part difficult on tall people!

I feel that others are articulating the feelings following the referendum better than I can, as I watch in disbelief as once again democracy fails to account for just under half the population, all of Scotland, where I want to move to now, and we are left with a disconcerting mix of having been told we were crying wolf when there was a huge werewolf eating the megaphone.