Following on from my last blog…My final correspondence to Arts Council England.

Many thanks for your reply of the 26th October 2015 outlining Arts Council England’s position concerning, avenues of compensation, freedom of information requests and grants for the arts.

I have to say, I did have to have a slight ironic chuckle to myself about Arts Council England’s ever so slightly patronising position, and its assumption that I have never applied for FOI or Grants for the arts before; both of which I have.

Let me tackle FOI first. In my experience this is the sequence of events that occur when an organisation does not want to reveal information:

I will not be going down this line, as I really don’t think Arts Council England merits any more of my time than this reply.

Now, let me move onto Grants for the arts.  I have applied for such a grant; I spent two days filling the form in only to be rejected.  In my thirty years of working in all areas of education and support, the general idea with helping children and adults achieve goals is to make the work challenging, but where they can always succeed. However, the application form for the Grants for the arts is quite clearly designed to make the applicant fail. It is designed so that the applicant has to contact Arts Council England in order for that organisation to tell the applicant what they want to hear and see; if you don’t conform you don’t get the lolly! It’s my ball and if you don’t want to play by my rules, you don’t get to play.  But the point is, it’s not your ball, it is the taxpayer’s ball. It is my ball and I, as an artist, never get to play with it…only the chosen few. And who chooses?  The chosen few…

You also stated in your reply to my original letter that Arts Council England has ‘robust application processes’. I’m really not convinced by such a bold statement.  Let us look at the case of the Globe Gallery in Newcastle.  This is not a criticism of the gallery or anyone involved with it, but an example of how public money is wasted by organisations and governments because of whims of policy, taste and bureaucracy. (Empty ‘Sure Start’ buildings all over the country)

The original Globe Gallery had to close, I assume (information not given), because of lack of funding. Over twenty years the organisation had gained grants to create a state of the art three story art gallery which now stands empty.  One could ask: where were the ‘robust application processes’ over the years to allow such a situation to happen? One could suggest that the money would have been better used by simply putting it all in a bag and setting fire to it, KLF style.  It certainly would have been a far more forceful political and artistic statement.

I realise these comments are a matter of opinion, but do opinions matter? I think the book is still open on that one concerning Arts Council England.

I have attached an invite to my relocated exhibition, outside Arts Council England’s and the gallery systems grasp.  I look forward to your attendance.

PS. Before I sent the original FOI request I posted a note on my desk, it read:

How right I was…that patronising smugness is catching! 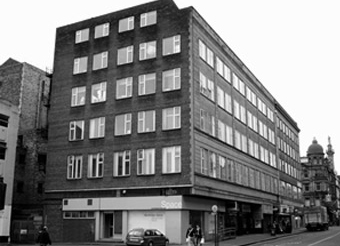 I have been thinking about this blog for over a week and have decided to publish it.  As I outlined in my last posting, my exhibition, BLURRED, which was scheduled to be shown at the New Bridge Project in December, had to be cancelled  due to a double booking on their part.  (I still await any hard evidence that the other event was booked before mine; however, I think a trip to Venus is more likely to happen than any evidence arriving in the post.) So I decided to write to Arts Council England, as they fund the New Bridge Project, to see if there were any avenues of compensation. I also asked for financial information, through the FOI act, concerning a number of organisations funded by Arts Council England.  This is their reply in full:

Thank you for your letters and for making us aware of your concerns.  I am sorry to hear that your experience with the NewBridge Project was not a positive one and we are grateful to you for having taken the time to share your concerns with us.

Though this cannot be handled using Arts Council’s published complaints procedures, as it refers to the actions of an external organisation which we fund, we still appreciate you giving us the opportunity to respond. We take all comments about an organisation in receipt of public funding seriously and I would like to reassure you that all your comments have been noted.

I feel that it is helpful to explain that while we may provide funding to an organisation, the organisation themselves are still fully responsible for every part of its business. We are not involved in the management of their day to day activity or responsible for any action an organisation takes, or fails to take. As such we are unable to intervene when there are concerns of this nature between an organisation and a third party.  There are also no avenues for pursuing compensation through Arts Council England.

I was also sorry to read that you feel the work you have seen in the galleries you have mentioned is mediocre. I therefore fully appreciate your acknowledgement that appreciation of art is a personal preference. Please be assured that we have robust application processes and assess applications on their artistic quality as part of our criteria. These are extremely competitive processes and we are confident that our application and post award procedures ensure excellent artistic experiences for people in England. I am sorry that you have not felt this.

I note that you intend to self-fund future exhibitions so you may be interested in our open funding programme Grants for the arts. It is common for us to fund individual artists to exhibit their work through this programme and I suggest that this is something you should look into. If you are interested then please let me know and I can put you in touch with somebody in my team who will be happy to help.

With regard to your Freedom of Information request we will need you to be more specific in the details you require. My suggestion to get the information you are looking for is to request all successful applications to Arts Council England for the organisations you have mentioned. These applications will detail everything you have asked for, we are unable to supply these without specific request from you. You can email this request to [email protected]

I am sorry that I can’t help you further with your complaint and I hope that you will consider Grants for the arts as a way forward for your work.

My next blog will be my reply.