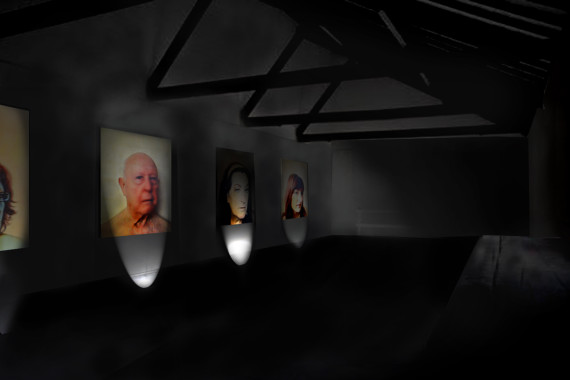 Before I start this blog I would like to ask everyone to give a silent thought to all those innocent children, women and men in Syria being killed and maimed by British bombs; to those who have recently been flooded out of their homes in Cumbria, the Scottish Borders and the Tyne Valley and to every man and woman who will find themselves homeless and hungry this winter on the streets of the UK.  As, what I am about to argue may well be important, but in real terms pales into insignificance.

I would also like send out a huge thank you to all those family and friends who turned out in atrocious weather on the 3rd of December for the opening of my ‘self- financed’ audio/visual exhibition BLURRED at Three Tanners Bank. I would have also  liked to send a huge thank you to all the gallery owners, curators, lectures and dignitaries that I send personal hand written invites to as well as all the other organisations and publications I e-mailed, but I cannot, as not one turned up. Is this indicative of the North East Art world where one could argue that curators/managers/directors seem to have theirs head shoved so far up their arses that all they can see is shite, where nepotism (not in the direct relations sense of course) and arrogance abound?

As an educator as well as an artist with massive left wing tendencies who sees the swathing cuts to arts funding as a disaster for our society as a whole, I would like to be more charitable and positive and I have been racking my brains to find some ‘positive criticism’ about the work that most of these organisation show, but I cannot. And no matter what else these organisations do, whether it is excellent education engagement to lectures and conferences, it is the work on show that drives these subsidiary activities; without top quality art the rest is meaningless.  I am tired of people telling me that ‘art’ is a matter of opinion; it is not. I am tired of going to these galleries and seeing: found object regurgitated and made into badly made sculpture; collections of found objects paraded on plinths like museum exhibits and offered as art; collections of made and found objects exhibited in pseudo-museum type environments and offered as art; watching and listening to performance pieces that in any other arts medium would be laughed off stage; uninteresting painting; uninteresting drawing and in some cases bad painting and bad drawing; average video/film work… the list could go on and on.  My fear is if this is not addressed and those that commission and control such work forget to pull their heads out of their arses in time, the cuts will continue. If I were a Tory minister looking for easy targets, I would not look much further than the North East Art world.

Artists can create, make and intellectualise what they like, I do, that’s what exciting and interesting about working as an artist. Private gallery owners can also promote and parade what they like, as that is their prerogative. It is a shame that many seem to dupe the public into pedalling expensive ‘illustrative art’ as fine art, much of which is of very dubious quality, but that is not a new phenomenon, through the ages people have been sold all sorts of tat as quality goods.  However public funded bodies must do better, much better if they are to retain any sort of proper funding.

At the end of my opening a number of people came up to me and said that the exhibition was far better than anything that they had seen at the Baltic Mill in years; that it was atmospheric and poignant. Now you could argue that they were just being kind, and if they had only said it was ‘good’ and not compared it to work that has been shown at the Baltic Mill, I would fully agree, but that was not the case. So the question is…why would they say that? How can an artist who has only been making art seriously for three years after a sixteen year break construct an exhibition that in the mind of a wide cross section of people is better than anything that the Baltic Mill can produce?

I have attached a link to a ‘show case’ video of the exhibition, which in no way captures the full intensity of the work, but gives a good flavour of what was on show. Why not view it and make your own decision.

Finally, I would like to end this blog on a really positive note. At this years’ Lumiere festival in Durham, there was a video work by made Storybox and Durham Sixth Form Centre entitled ‘Precious’. It was rather hidden away in the grounds of the Sixth Form, which was a shame, as this piece of work was head and shoulders above anything else on show.  My wife and I stood and watched this for well over 15 minutes, and I personally could have watched longer. This, in my opinion, is the standard of work that the Baltic Mill should be continually showing. It should be bought and sited as the first exhibit in a permanent collection that the Baltic Mill should start now; a permanent collection is well overdue.

I have a personal benchmark for excellent work, which is – ‘I wish I had thought of that, I wish I had made that’…this benchmark is rarely passed with most of the work I view in the North East…maybe my standards are too high.