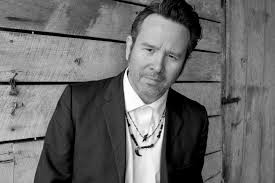 Last Thursday I took a short break to London to see the singer-songwriter, Grant Lee Phillips, at the Islington Assembly Hall.  In the early to mid-nineties he was the front-man and songwriter for the grunge/country three-piece outfit Grant Lee Buffalo that hailed from the west coast of America.  Back then I saw the band perform at the old Riverside venue. For those who don’t know the club, which has since sadly closed, it was a tight, low ceiling, sweaty death-trap with a great vibe where bands could play as loud as they liked. Grant Lee Buffalo were loud, super cool with Phillip’s  broken crystal voice cascading through the consummate raw rhythm section orchestrated by his super electrified 12 string guitar…great memories.  The band became quite big, playing to thousands of people, if not tens of thousands at festivals and outdoor gigs.

At the Islington Assembly Hall, a lovely old fashioned venue which is part of the classical fronted Islington Town Hall, I roughly counted 200 chairs that had been set out for the gig.  These were not all filled as Grant Lee Phillips walked out into the single white spotlight that cut through the pitch black stage to start his set; a bit of a come-down you could say compared to the dizzy heights of the mid-nineties.  As it was the last gig of his one man tour, he could have played a polite one hour set and left without as much as a nod and a wink. But that was not the case; he was the consummate professional, playing for well over an hour and a half, just him, his six string guitar and that sorrowful crystal voice.  Not only that, but after the gig he was in the foyer chatting to fans and signing autographs for some time.

So, when dealing with arts organisations, especially those that are funded by Arts Council England, I think that we all should expect a certain level of professionalism, similar to that which Grant Lee Phillips gave his audience last Thursday. Unfortunately, a recent encounter with the New Bridge Project, an arts organisation based in Newcastle upon Tyne, fell, in my opinion, somewhat short of what I would consider professional.

In July of this year I booked the Annex gallery space at the New Bridge Project for the three weeks prior to Christmas week. This, I was told last Wednesday, had been double booked by the staff at the project and I have been forced to cancel my exhibition, the cost of which I have yet to calculate.  In the last communication from the New Bridge Project, they apologised for the mistake, but stated that the other event could not be cancelled, as it was booked before mine. I have received no hard evidence that to show that this is the case, and  I found the staff unsympathetic and accusing, especially considering that the fault of this double booking lies solely with the New Bridge Project.

What was particularly galling was the New Bridge Project’s attitude towards my work; the conversations seemed to imply that it was somehow far less important than the other ‘Post card’ event.  I can assure you that have invested a large amount of time, effort and money to create a major audio/visual exhibition. This would not have been a ‘two-bit’ pop-up, thrown together, pinned to the wall effort.

If you have read my blog before you will know that in 2012 I returned to Newcastle to begin work as a full time artist after a sixteen year break. Since 2012 I have tried at various times to secure an exhibition to show my work in the north east, but in particular, Newcastle. I approached the following galleries, (which I believe have all had Arts Council funding at one time or another) as I felt that the spaces that these organisations offered were more suited to the work I was producing: the New Bridge Project, the Vane Gallery; the Globe Gallery, Baltic 39, the Newcastle Arts Centre, Northern Print and MIMA (Middlesbrough). I have also made enquires at some these organisations about the possibility of renting spaces. In the end, it was that avenue that I had to take, as not only was I unable to secure an exhibition for my work, but even an interview to discuss the possibility of an exhibition.

What is particularly frustrating about this (MIMA excluded, as I have not visited that gallery enough to make any reasonable judgement), is, except for the odd occasion, most of the work I have seen at these galleries is, in my world- travelled opinion, mediocre at best. This seems to place my work below such a bench mark, which may well be the case; but how can one really know without being able to exhibit?  Please go to my website to gage your own opinions: www.markcarrartist.com.

I have discussed this mediocrity with some fellow artists and one suggestion that was put forward for Newcastle’s malaise into mediocrity is the failure of the Baltic Mill to establish itself, as it promised, to be truly top quality venue for modern art. And, even though it has periodically put on some fabulous exhibitions, the overall quality of the work on display has been mediocre and simply not good enough to achieve its original goals. The lack of a permanent collection seems to exasperate this. This mediocrity, in my opinion, filters down to where the ordinary is accepted as good across many galleries in Newcastle and beyond.

I realise these statements may burn bridges, but in reality I have no bridges to burn, as it is quite evident that the only way I will ever be able to exhibit my work is to organise and fund it myself outside the gallery system.