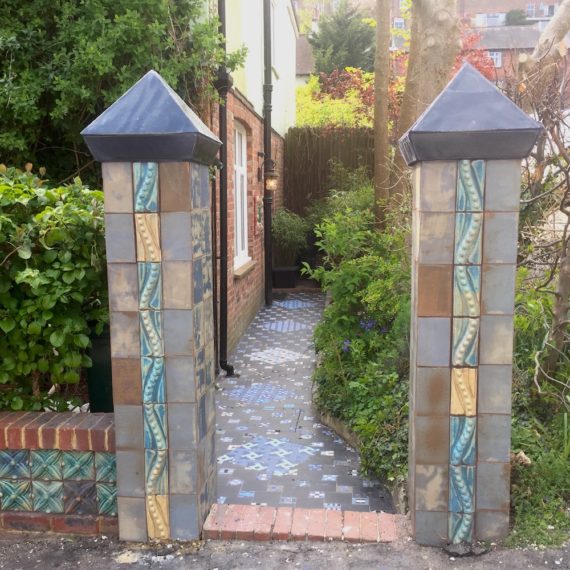 This weekend was the deadline for all the Korean work arriving; the private view is on 4th May, in 9 days’ time, and on Monday I have an installer booked in to hang the wall-based work. And where is the work? At customs!

Yesterday I spent the whole morning wrangling with border control trying to get the boxes cleared. I checked it out on the government website and it states quite clearly that if the work is for an exhibition, it does not attract any duty or customs charges. It seems the problem lies in how the work is labelled. As long as it labelled ‘temporary admissions’, customs will let it go through. So now we know! It’s all about the labelling. Some of the artists labelled the work ‘sample’, some ‘gift’ – some got through, most not.  I already had 5 boxes delivered at the beginning of the week and had been wondering why there was such a lull. Then a clutch of customs charges arrived. Apparently, the worst-case scenario is that I have to pay VAT and claim it back. If they let me have it back! At least a minor triumph occurred yesterday when Wook Jae Maeng’s boxes arrived. Especially so as his is some of the wall-based stuff that needs to go up on Monday. Veronica’s shoes are stuck at customs though, one of the main pieces going on the gallery wall. Oh my. Definitely do not have time for this! So, everything has been delayed according to my schedule. All of this was compounded by the fact that my full-time studio assistant had a crisis last weekend and disappeared off the scene overnight! Hopefully she will return in May but all the plans I had for these last two crucial weeks have had to change drastically. 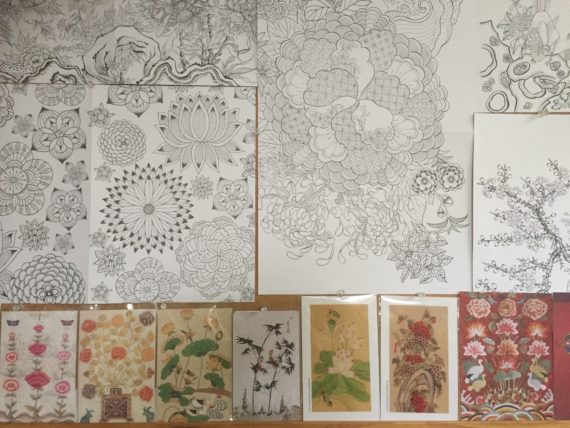 The main injury is to my own design process for the new Korea-inspired work that I am making for the Sladmore show and BCB (British Ceramics Biennial). By the time the show opens, I need to have those designs finished and ready to start making prototypes and of course this is no longer going to happen! Ceramics is such a laborious, time-consuming process that the making/drying/firing/glazing schedule is absolute and I’ve got it worked out to the day. The only way I can stick to the schedule is to simplify the designs. Rather than design the whole piece the way it will go on the wall, I can alter the process by designing the main components and then assembling them once they are made. Thinking back to last year, when I made my Shetland Flora roundels, one kiln overfired so badly that I had to redesign most of the work using the glazed pieces, discarding the original layout, and it actually led to some unexpected improvements. So that is the new plan! 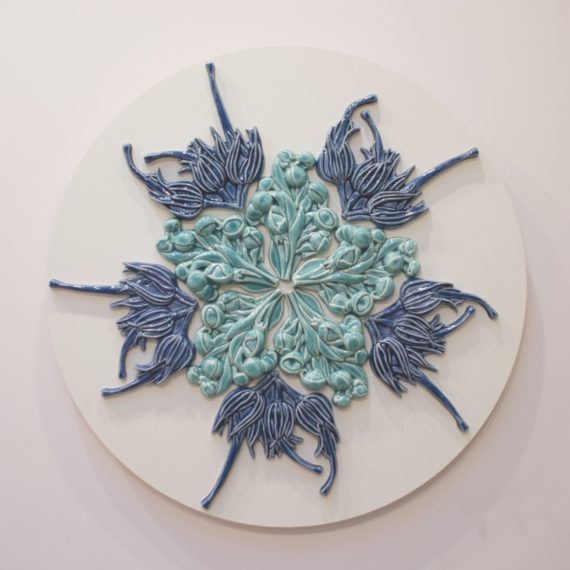 I’ve had two journalists interviewing me at the house this week. Viva Brighton, a really good monthly local, are doing a feature in the May issue and Sussex Life are doing a 4-page feature for their At Home section. The photo-shoot was an experience! (very detailed). I am looking forward to seeing the photos. It’s brilliant as both will come out in time to advertise the exhibition. Crafts Magazine are also doing a piece for May along with my advert. So hopefully some of the press will draw crowds! 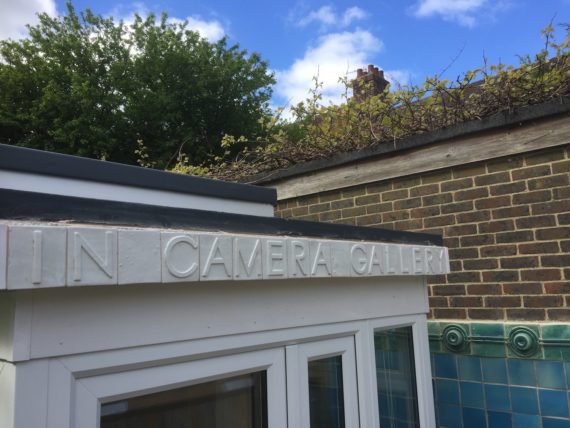 The Ceramic House has been undergoing a tiling frenzy for the last two weeks. All the new pieces I have been making in the studio are now installed and looking good! I can hardly believe that it went so well without any major hitches! Normally, when tiling bits of the house, I am running to the studio to remake and fire and giving hot tiles to the tilers to apply! Actually, this did happen with the In Camera Gallery tiles – the first glaze firing underfired and they had to be refired, but it all worked out in the end. I am proud to show off my new grand Asturian entranceway into the house – the tiles were originally designed for El Llanu, a casa de campo on the top of a hill in northern Spain. And four new floor pieces – the front mosaicked path, the Gallery terrace with tiny handmade tiles and the lower terrace and path. Oh, and three fireplace hearths as well as the In Camera Gallery sign. This is a minor miracle that the weather behaved, the tilers did not let me down and everything has been finished on time! Triumph! 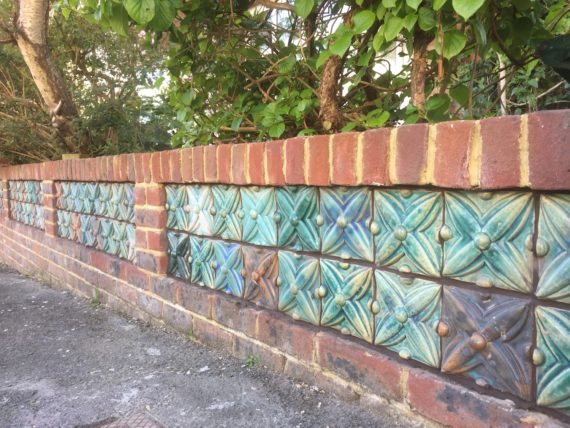 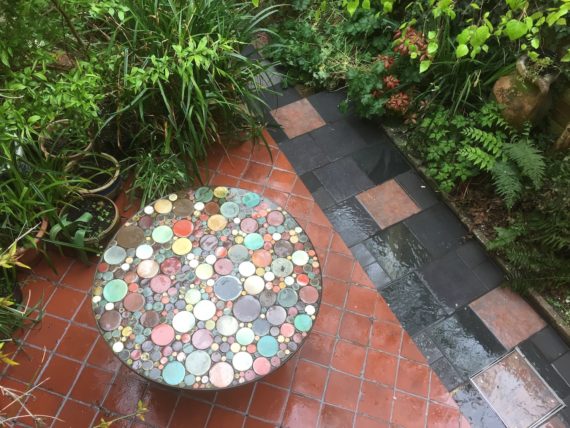 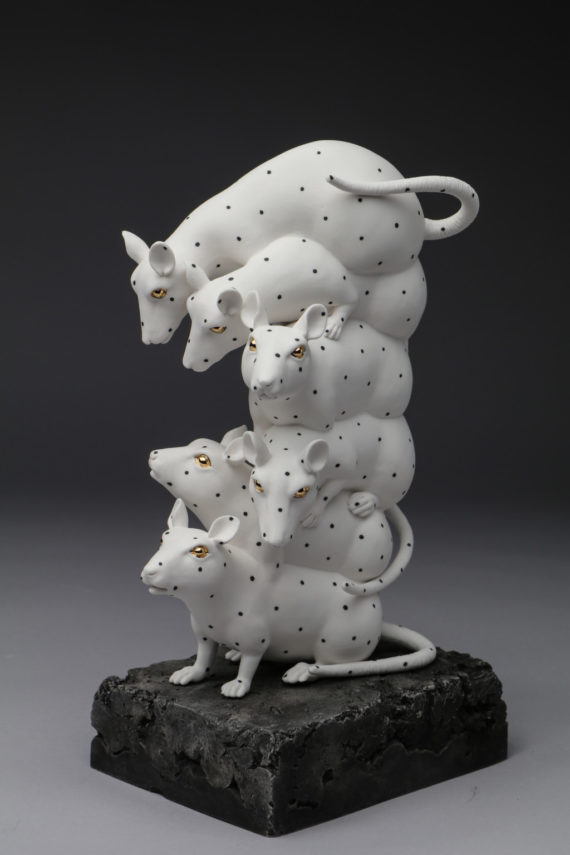 Good news again! Hankil Ryu, our lead Korean sound artist who is helping organise the Korean trip in the autumn has confirmed that Mullae Arts Factory have put us into their programme for November. Dates TBC but we can plan for an exhibition of my work and a concert night of sound art where we plan to launch the sound app and also the film that Tela Films are going to make documenting the project. I think I might see if I can make a ‘miniature’ (well, that’s a bit unrealistic for me, as I usually make large scale work!), so perhaps a smaller scale series of pieces so the shipping is not too much of an encumbrance.

I still haven’t had time to even think about making the big piece for Sladmore Contemporary yet. Which is worrying me. There is simply too much to do. This is normal for me, so it’s just a matter of prioritising, but in the end, it still all has to be done.

I have been trying to get my current public art commission designs to a place where I can send them off, satisfy the commissioner, and put it to bed until after The Ceramic House and Sladmore exhibitions are up/over. The problem is, it is a huge, ambitious commission and I am having to practically learn photoshop (which I’ve never been very confident with) to be able to do it. So, on top of everything else, I’ve been having photoshop sessions with my graphic designer to get those done! Every day this week I’ve said I can only spend one more day working on the designs for now. So today is the last day (again!). And then I will send off a package of work in progress so they can see what I am planning at least.

I now have an assistant helping in the studio, which is brilliant. The main things she is helping with are finishing the tiles for the grand entranceway and helping with my private commission for a fireplace which keeps being subject to kiln disasters. In the last firing, one out of four of the main big feature tiles came out perfect. So, re-make!

All this week I have had tilers tiling every unfinished surface of the Ceramic Garden. Last night I was at a private view and when I told this to a friend, she said, “So you’re doing that as well as everything else, right now?!”. And I found myself attempting to make excuses! But it’s always been in the plan. For years, actually. To make the last few external floor features and the grand entranceway, and those are the tiles I have been making with an assistant since January. Anyway, the weather was favourable and the tilers were accomplished. It’s looking great! Two floors done, three fireplace hearths and the front wall/pillars nearly finished. Just one pathway to go and the new tops for the pillars (second hastily remade batch currently in the kiln – fingers crossed!) and grouting the entrance feature to complete, scheduled in for next week.

The flyers have arrived, looking nice. The advert in Crafts Magazine has been submitted. I’ve still got to send off invites to the private view at The Ceramic House. I been compiling a new list of invitees (over the last few nights during my insomniac hours), which is taking a lot longer than one might expect. I have various lists from different years so I’m trying to get a definitive updated PV invite list together once and for all! 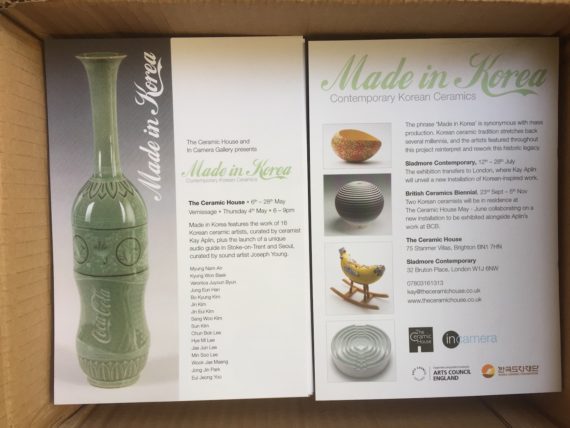 I saw some of my Korean exhibitors at Ceramic Art London last week, which was lovely. The first box has arrived from Jon Jin Park, still unopened, but I know what he’s sent me as I chose them after seeing what he had at CAL.

The other artists have been sending me selections to choose from. Some of them! Some just haven’t, but I guess if the work is still in the kiln… that’s OK, I know it will be brilliant work. I’m worried about customs, having had boxes stopped before when coming from overseas. It’s a tricky one, as the costs are astronomical and the chances are the work will go back again anyway. I have to trust that the artists know what to do. The last thing I want is half the work being held at customs and no budget to pay the fees!