Last day today of Made in Korea at Sladmore Contemporary! 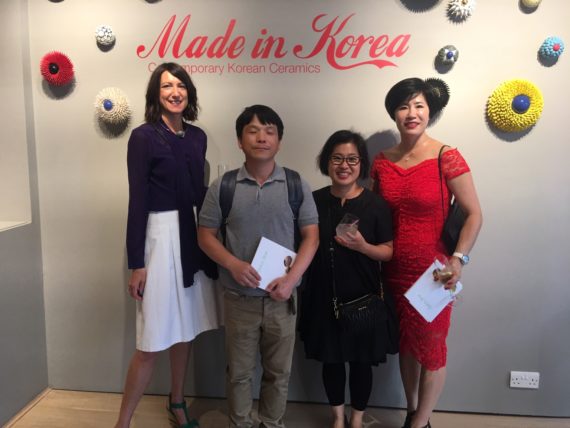 Following a hugely successful month at The Ceramic House, our seventh and most ambitious exhibition to date has received record visitors and has been highly acclaimed during the last three weeks at Sladmore Contemporary. If you are in London today, don’t miss the last chance to see an exceptional selection of Korean contemporary ceramics. 32 Bruton Place, Mayfair W1J 6NW.

Photos from the opening night: 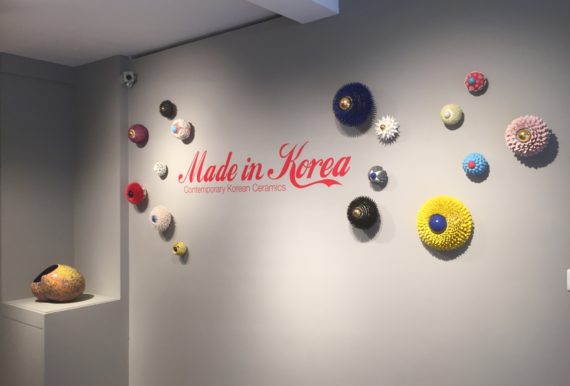 Today the Made in Korea show opens at Sladmore Contemporary in Mayfair! This is the first time a Ceramic House show has transferred to another venue, and something I vowed to do after the Fantastic Tales Danish exhibition in 2014. To bring a collection of work like this together and then only display it in one place seems ludicrous, especially when the work has travelled half way round the world. 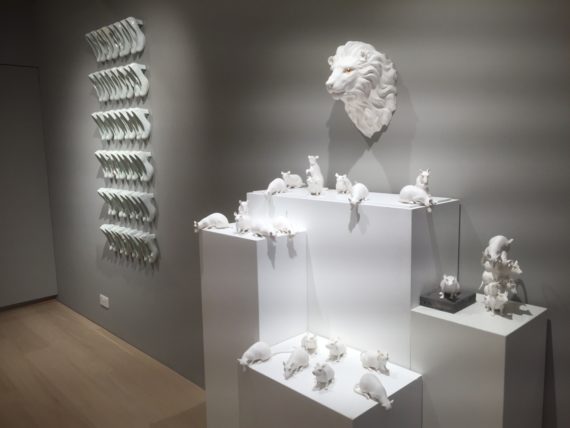 Back at the beginning of 2016, I had been wondering where I would be able to take the exhibition, and my first attempt had been the Korean Cultural Centre. They were already doing a ceramics show around the same time, then out of the blue, Myung Nam An, a Korean ceramist based in London, who showed here in 2012, suggested Gerry Farrell. He has been a gem! He has two galleries – Sladmore Gallery, which shows fine art bronzes mainly, and Sladmore Contemporary, which is where he is prepared to be a bit more adventurous. Recently he has been cultivating an interest in ceramics, which is a new venture, so it was perfect timing to be introduced to him, with a ready-made show of exquisite Korean ceramics to offer!

It has been a lovely experience working with Gerry and everything has just fallen into place so easily. I am so thrilled that the exhibition has transferred there, and it has been wonderful for the Korean artists too, to be able to offer them a Mayfair exhibition. Hopefully they will all sell more work! 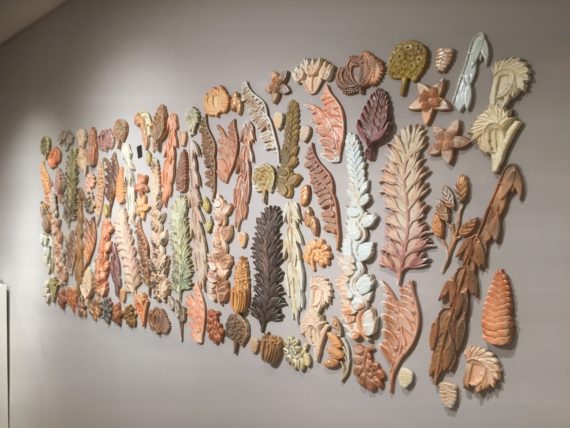 The exhibition continues until the 28th July so if you get the chance and you are in London, pop in! Sladmore Contemporary, 32 Bruton Place, London W1J 6NW. Opening tonight 6-8pm 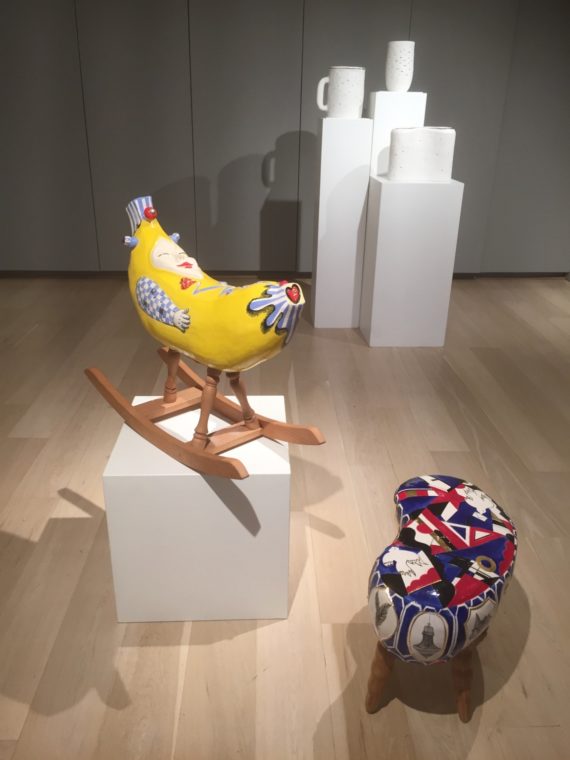 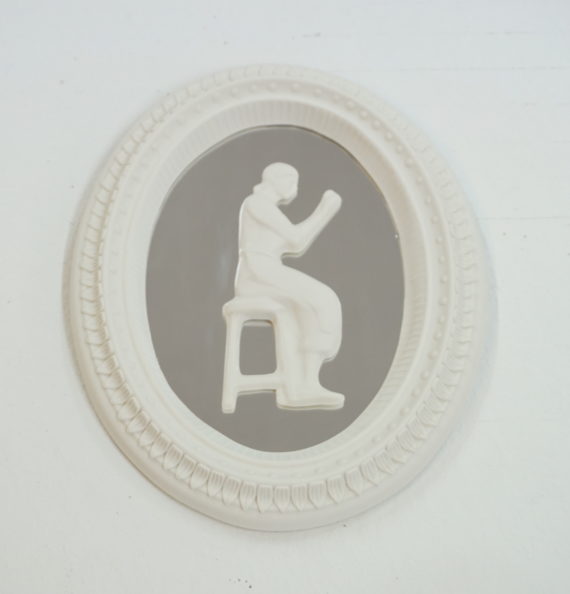 For the past seven weeks, we have had two charming and talented Korean artists in residence at The Ceramic House. This is the second residency we have run here and it went really well. 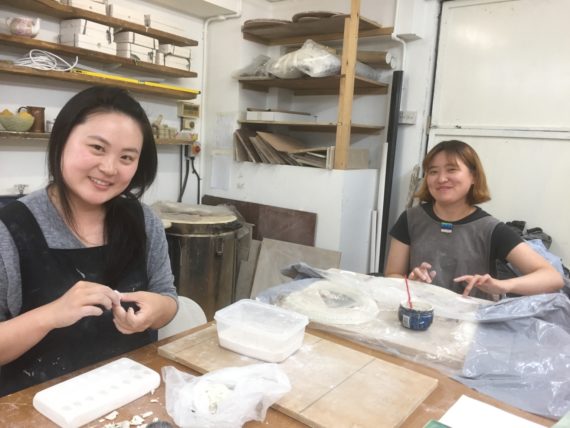 Last year we (and by we, I mean myself and Joseph Young, co-resident of The Ceramic House) ran the first residency for our collaborative ceramics and sound Landscape : Islands project. We hosted two pairs of sound and ceramic artists who collaborated on new work for an exhibition at Phoenix Brighton we curated for Brighton Digital Festival. The ceramic artists used my studio at Phoenix and the sound artists visited periodically, making use of Joseph’s sound studio (also at Phoenix).

This year the model changed slightly. The residency was purely for two ceramic artists this time and the brief was for them to collaborate in creating a piece for British Ceramics Biennial. They arrived here having prepared the starting points for their piece. Won has a colleague in Seoul who specialises in 3D designing, and they brought two 3D printed models of working factory women, having researched the potteries industry in Stoke-on-Trent and discovered that 80% of the workers were women. They have a keen interest in feminism and so decided to use the female aspect as a focus for the project, and the repetitive work they did in the factories.

It was interesting to see how their ideas progressed and crystallised over the course of the residency. Certain things they saw or experiences they had had a profound impact on the end result. Originally, they had planned to create a wall piece and a floor piece using the 3D models – one is a low relief and the other a free-standing 3D figure.

The site visit to Stoke was crucial as it gave the artists a lot of insight into the history and manufacturing processes and traditions. They came away with the intention to make a piece inspired by Wedgwood Jasperware having been impressed with the displays and the Wedgwood and the Potteries Museums, in particular a framed piece. They came back to Brighton and discovered all the antique and vintage shops (and had fun in there no doubt) and found an old oval framed mirror which then provided the context for their idea.

Pretty quickly they abandoned the idea of making two pieces. A wise decision I think when faced with such an immovable and tight deadline. By this time the standing figure had been decapitated with all limbs removed, while they tried to find the simplest way of casting her. She ended up in the bin!

They decided to place the working woman relief inside the frame, which they cast, and then press-moulded the frame. They then spent several weeks decorating the frames with meticulous hand-made decoration. I questioned why they didn’t decorate the frame first and make a cast of that, but their intention was to carry out the work using the same repetitive processes the factory women would have had to do, so they actually brought the authenticity of the concept into the making processes. Admirable considering how tedious these repetitive jobs can be. But we makers are used to it anyway! But I thought that was credible and interesting. It’s always fascinating observing people’s processes and an honour to be so closely involved with the creation of a new piece of work.

Then the idea of colour was under discussion for quite some time and in the end, they decided to keep the mirror and frame the pieces on a Wedgwood-blue wall with a bespoke wallpaper border with mythological figures pertaining to the decoration of Jasperware that they will get printed in Korea. Again, just like the 3D printing, how easy it seems to get these things done in Korea. Of course, it’s who you know, but I get the impression that farming to these types of jobs is much more affordable and simple than it would be here.

Anyway, they beavered away for five weeks, having spent the first week in Stoke and the second planning and ordering materials, and they got it all done literally the day before they departed. We discussed that it doesn’t matter how much time you actually have, whether it had been one week more or less, it still would have been completed just in time! Deadlines rule! 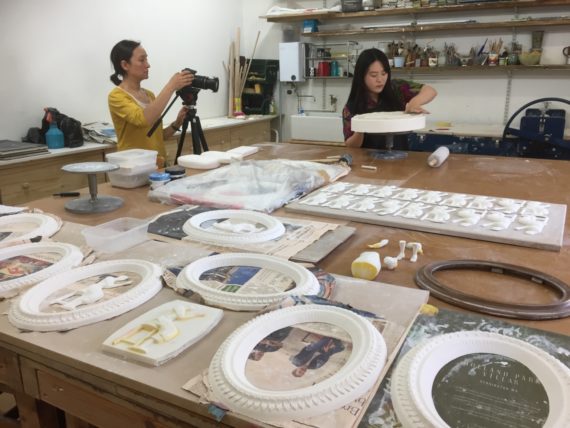 Nicki Lang, our filmmaker, came to film their processes for the eventual documentary that will describe the whole project and be premiered at Mullae Art Factory in Seoul as part of the Resonance Festival in November, which is coincidentally where Jin has her studio!

While they were here, they both gave a lecture at Brighton University, part of our ongoing relationship with the 3D design and craft course, who have been offering talks to artists involved in The Ceramic House exhibitions since 2014. We also presented the project in the monthly Spotlight event at Phoenix Brighton, which was a lovely, well-received event. Joseph gave an overview to the project and presented the sound elements (which have expanded – keep following the blog to find out how!); I talked about my research trip to Korea and the ceramic exhibition and all the participating artists at The Ceramic House and its transfer to Sladmore Contemporary in July and Jin and Won talked through the process of what they produced and the concepts and methodology behind it. All in all, an excellent end to a very successful residency.

Even better, they are both coming back to install the work in Spode Works for the opening on BCB in September, so if you are coming to that, you can meet them. Can’t wait to see the finished piece!