This most recent piece of work returns to ideas originating in the Snapshot Series, and before that in the Suspending Closure Series, both in terms of technique and the diversions occurring in the significations made in these photographic images. The difference in this piece, The Fighting Temeraire As If, is that there are more layers than previously and it is more complex and specific in terms of content and signification.

I made this for an exhibition called Art Ahoy 2013, which is currently still on show until the end of the month at UCS The Foyer, Waterfront Building, Ipswich. I made it site specific as the show links in with the Maritime Festival and the photographs I took of the dock area during the rebuilding over recent years, worked well as a factual reference against which I could overlay with a kind of fantasy (i.e. Sci-Fi) reference; which again links with the Un-fictions ideas. It also echoes the postmodern concerns for mixing old and new, for allegory and for borrowing found images. But the Temeraire is referenced only in so far as the composition and part of the original background detail; but I have taken an image of a ship that was really docked in Ipswich and the starship Enterprise replaces the tug boat of the original Temeraire painting so that fiction and fact are compromised.

It takes those ideas and merges the ideas around digitalisation into the piece to some extent as it forms into a grid. It has a proliferation of images as well as an overriding composition, making this another breakthrough. It was very complex to work on as well as conceive, and aesthetically more involved than many recent pieces of work, so this has significantly developed the ideas and altered my way of working. Other pieces along these lines of complexity are in the pipeline, but also the Un-Fictions cut-out annuals are due to be revisited. It seems that the project at hand of developing practice and sifting through ideas are nearing a point of conclusion, where there is more clarity in the concepts and the research questions have been resolved more considerably than they were at the point of concluding the Masters degree. 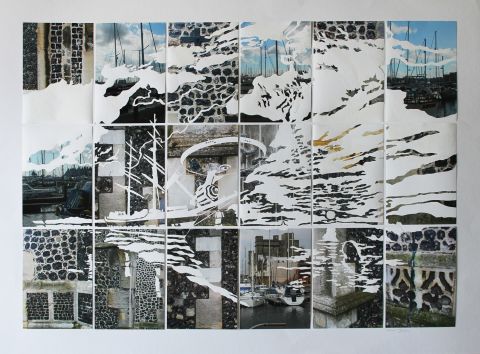 Printmaking and drawing developments reveal some consistency. The second printmaking piece Tracing the Everyday confirms a certain disquiet as the everyday is traced in the process of printing, and the colour register along with the cut-in image take our associations in different directions.

The new series of drawings, initially exploring images from memory and those observed, changed to show discrepancies between those observed in the everyday and the insistent interference of images relating to the issues of Virillio and the technological age (Interference 2 & 3).

Corner of the Room Remembered and Recorded, lead to Memory of Place and Another Place observed, then the still life drawings interrupted with images from newspapers to that ‘everyday’.

The series of still life drawings incorporate embossed images taken from newspapers not as a memory as such but as a residual memory as a kind of noise. The embossed drawing is restated and enforced the more I try to state the observed appearance of things before me. This perhaps captures those issues raised by Virillio and play on the issues revolving around semantic and episodic memory revealed in my research into Ziki.

So this investigation of representation continues to shift its focus to some extent, and yet perhaps rather redefines and clarifies, and as it registers aspects from very conscious and also unconscious associations. These images seem perhaps conditioned by a certain disquiet in my own life recently, though not particularly autobiographical in any obvious way, it seems that memory and episodic events do condition what we find in images or perhaps that’s the other way around; or maybe that the two have just converged here. Not really sure about that but there is a definite uncanny echo going on whatever the initial exploration was about. I think I will leave it at that.

Under the working title Digitise these two pieces develop the ideas around Virillio and the proliferation of images in the technological age, but also with a certain amount of daftness as usual. Titles will be common phrases as if lifted from conversations that might plausibly derive from the event originally and now partially pictured. Moving the scale up to A4 and A3 works well, as these snapshots take on a narrative role elsewhere to my original ideas for family photographs.

The digitalising and pixilation continues. I have been working further with the pixilation ideas and this time with combining the snapshot ideas to produce images that refer and defer in different ways within the same image. I created a grid template derived from the 1cm square increasing in size at regular intervals to restrain the drawing aspect of the cutting and enforce the ‘neutralising’ affects of the technological age. While the squares which form consistent captures of the scene, the defined cut out element (a hand in this one, Digitalised Snapshot 1) signify in a more specific way. The two aspects complement each other as the context is built in the way they both refer outside of the photograph, yet the particular signification of the place is denied and diverted around in an unsettled representation that resists closure (this is a 10 x 15cm snapshot photograph).

I have also been cutting out larger photographs. This one (Hand Cutout) is A4 size and seems to work well on a larger size, though I am not sure where this one is going, but I did return to it and enclosed a 1cm square just below one of the hands, which seems interesting. I think that the pixel on a larger scale works differently and has some potential, so I will work on some more pieces.

Researching put aside I have been making work like frantic and now it is time to start up loading the progress.

I am working on multiple ideas at the moment with work in progress for collages, drawings, installations and more printmaking. This is because I am rationalising my time and also to meet oncoming deadlines and keep the different projects running to the right development needs.

These photocuts are a progression of an idea that developed a while ago and takes a while to work towards completion as the piece needs to be a lot bigger yet. Taking up Virilio’s ideas about the technological age and issues of image saturation in the technological age, these images (snapshot photographs) are reduced to the decimal 1 cm square taking a consistent top-left intrusion as the motif in the reduced image left from within the picture. The origins of the pictures are obscured by the reduction as the surface is peeled away to leave these recurring, abstracted, motifs from within the photograph, nullifying and multiplying the insistent noise and torrent of fleeting images, lost as they are in a nondescript expanse. The working title is Pix, as a play on . . . well you can guess, I guess.

The work seems to be moving in the right direction and plays a similar game as the earlier installation View Points that I completed last year (see my website portfolio), but here it centres on a sense of lost or dismay rather than the familiar expectations of encounter afforded by viewing points in the landscape as before. The viewer here has to scrutinise in a vain attempt to work out what is being depicted. It seems at the moment that the piece must be considerably larger to impact on the viewer significantly.