Eastside Projects reopening: "A lot of positives have come out of what at first seemed a very bad situation" - a-n The Artists Information Company 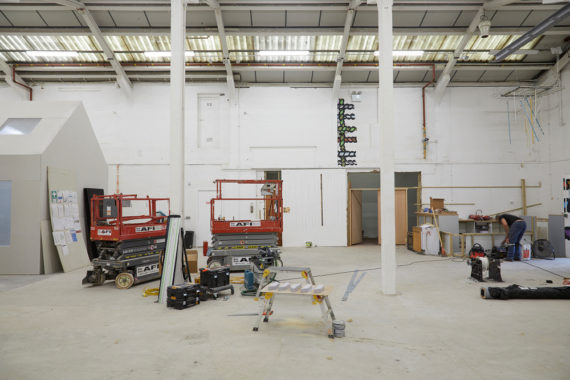 This week sees the reopening of Birmingham-based artist-led space Eastside Projects following a 12-month hiatus. The gallery at 86 Heath Mill Lane unexpectedly closed last June, with rumours circulating as to the reasons why.

A period of uncertainty followed, before support from Birmingham City University, Arts Council England, Custard Factory and K4 Architects resulted in a £250,000 revamp of the site. Now the organisation is back in its original space and raring to go with a stellar programme of exhibitions and events.

Director Gavin Wade is keen to set the record straight on those rumours. “People thought something major had happened. A lot of things were said, including that the roof had fallen in, or that an artwork fell over. None of it was true, although I do quite like some of the things people came up with.”

The reality was far more administrative and bureaucratic. “It was an evaluation of the safety of the building by Birmingham City University’s estates team. It concerned them to such an extent that we had to close. They found that there were a substantial number of things that needed to be fixed before the building could be reopened, including structural and electrical issues which could potentially interfere with our ability to operate.”

Wade explains that Birmingham City University are leaseholders on the building, which is rented from the Custard Factory, and that as an independent company, Eastside Projects has a sub-lease with the university.

“Thankfully the university agreed with us that it was important to invest properly in replacing anything that needed upgrading and solving any of the issues with the use of the building, but also ensuring that Eastside Projects is as operational as it was before.

“A lot has changed. All the electrics were stripped and replaced, as well as the entire infrastructure of the building. Offices, the kitchen, the front desk and the actual flow of the building and storage have been taken out, re-designed and re-built.”

In addition to the financial input, ACE and the university agreed to allow the organisation to bring in the people it wanted to work with. This included K4 Architects, plus some of Eastside’s founding directors such as Celine Condorelli, Simon and Tom Bloor, and Ruth Claxton.

“We were able to say what it is that we wanted to do, design it, prepare it and check it all the way through, and oversee the project management for the installation as well. It was a very painful and perhaps traumatic process for us, but in the end the university has followed through and supported us in our partnership to realise the next vision of what Eastside Projects can be.” 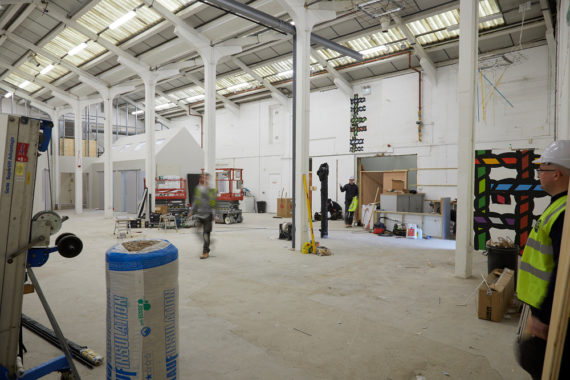 Over the course of the last 12 months, the organisation has taken a number of activities off-site, something Wade says has highlighted the strength and generosity of Birmingham’s art scene.

“The people of the city were really supportive and rallied round. As soon as we closed, just within Digbeth other organisations were helping us out and letting us use spaces for projects, workshops and events. It was great to feel the mutual support. But also speaking to people from the city council and other universities in the area, everyone was behind us and trying to help out in whatever way they could.”

Wade explains that this presented some unexpected positive results. “The next exhibition we were planning was ‘Policy Show’, which was partly going to happen in the gallery but also lent itself to happening outside of the gallery. The council let us use Birmingham City Chamber for an event, which is an amazing space where all the council’s policy making happens. We also held an event focused on policy making in education at Bower Academy which is a performing arts school. So each of the locations became integral to the idea of the show.”

The gallery is reopening with two exhibitions, including the General Public‘s ‘The Endless Village’, which will investigate ‘life, localism and trade relations in an imagined future post-EU Britain’. The other show is by Seoul-based collective Mixrice, which is part of the Midlands Korea Season which is led by New Art Exchange and Eastside Projects.

Mixrice has spent time learning about migrant workers, refugees and asylum seekers in Birmingham, which has made Wade think differently about Eastside Projects’ programming. “They connect with those communities in Korea as well. They have been finding out lots of interesting cross-cultural migrant stories and it has connected us with some of the refugee organisations such as Birch network.

“This has made us switch some of our processes, including our family workshops which used to be in the gallery. Now we are partnering with the Birch network to make those events really special.” Wade says it’s taken the upheaval to realise that in the past Eastside Projects was just serving the artist community and their families. “It’s allowed us to meet more people and spread our thinking.”

In October the organisation will be revisiting the first show it ever put on, ‘This Is The Gallery and the Gallery Is Many Things’. Wade explains: “It set up the idea of an evolving artwork, or the gallery itself as an artwork. We’ll be inviting new artists who we’ve been working with recently who are still continuing production processes in the city, plus artists who have exhibited with us over the ten-year period. It will be a big celebration for us.”

After that are three solo exhibitions from Mark Essen, Nicola Singh and Larry Achiampong from October through to February. Then, next spring will see a curated exhibition by Rehana Zaman, the first of a series of artist-curated shows over the next four years.

Ultimately, the last 12 months has seen a serious problem turn into an opportunity for the organisation. Says Wade: “There’s been a lot of positives that have come out of what at first seemed a very bad situation.”