A Q&A with… John Walter, an artist going viral 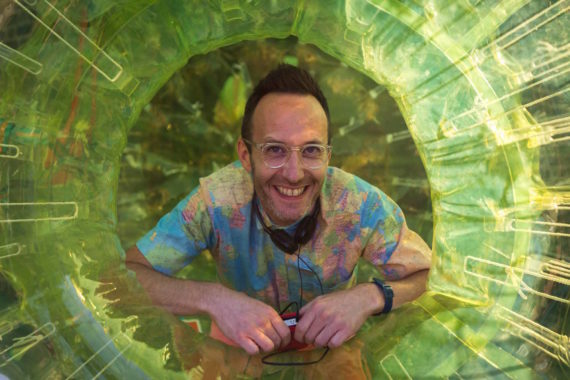 John Walter’s solo show ‘CAPSID’ at CGP in London continues the artist’s investigation into how viruses are represented in the visual arts. The exhibition follows Walter’s stint as resident artist of infection at University College London (UCL), where he collaborated with structural virologist Professor Greg Towers. It focuses on the capsid, a protein shell that enables the rapid transmission of viruses.

Walter’s research is manifested in a proliferation of visually bombastic paintings, films, prints and installation, all underpinned by playfulness and humour. The show’s centrepiece is the soap opera-style film, A Virus Walks Into a Bar, which personifies capsid as a charming trickster in an elaborate onesie.

At first glance, you’d be forgiven for not guessing the show’s scientific roots: “It’s not your usual tinted microscopic images,” says Walter.

Instead, it’s a riotous expression of the artist’s magpie-like curiosity, creating a look and feel that can also be seen in the Walter-curated Hayward Touring exhibition, ‘Shonky: The Aesthetics of Awkwardness’.

From cheese brand The Laughing Cow to Marcel Duchamp and the life cycle of a virus, Walter combines, layers and repeats imagery and language from disparate scientific and cultural sources. This leads to some surprising and, at times, disorientating juxtapositions.

“I want people to come and let it flood over them,” says Walter. “It’s not a one-liner. It’s about making a big thing, an epic thing, a meaty thing that you can get your teeth stuck into. And that seems fun to me.” 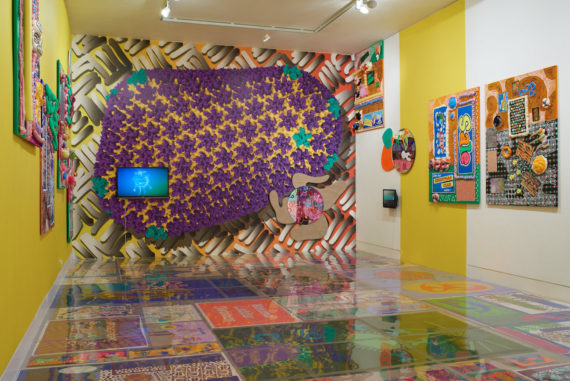 I’d never heard of capsids before. What was it about this protein shell that piqued your interest?
Capsids are clearly interesting things. The geometric properties of the capsid are amazing – mathematically, structurally – and I think people get off on that. Narratively, they’re interesting because immediately capsids are anthropomorphised; [within scientific discourse] there are metaphors of cloaking, clothes and dress. It’s personified as having a moral imperative which it clearly doesn’t have. It’s just a virus. It does what it does. There are also peculiarities to retroviruses like capsids because they’re complex and they’re sneaky. That’s what I’m interested in: the stuff about corruption and disguise.

Your collaboration with Professor Greg Towers has been crucial to this project. How has this worked?
Greg and I are both good translators. We make our work, but we’re willing to talk about it to people who aren’t natives, so that’s where we started the conversation. I think also because I’d worked in HIV before with [2015 exhibition] ‘Alien Sex Club’, I wasn’t coming as naive so he trusted my understanding of the science. Greg’s also a bit of a maverick. He likes the humour and the way I push the envelope. All that naughtiness, the language, he gets. Not everyone would be up for it. As resident in the lab, I’ve got to know different students and researchers. I’ll attend lab meetings, run workshops. I’ve built capsids out of cardboard. It’s been less about physically making and much more conversational. It’s about intellectually discussing the science, and a lot about educating them on the art. 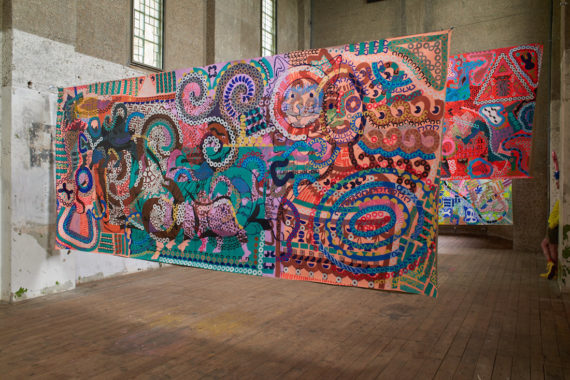 There’s an enormous volume of work in ‘CAPSID’, which literally covers the floor in one of the spaces. How did you decide which elements you were going to include?
It’s my desire to show as much as I can because it pings off itself. The work’s designed as a linguistic system, so that more is more. The hanging mechanisms are not fussy and this chimes with my ideas about ‘shonky’, which means that someone who comes in should be able to understand how something’s been made. That part of the process shouldn’t be mysterious or magical. I didn’t anticipate how the having work on the floor would be a trigger for interaction. It feels naughty and intimate. You see people moving differently, looking up and down.

You’re not often aware of your body in a gallery.
Yes, and those habits are dangerous, because they become too easy, too familiar. If I’ve learnt anything from Arakawa and Gins, architects who are in the ‘Shonky’ show, it’s about deliberately setting things off kilter, if only to excite you again. The hang on the walls is all syncopated, rhythmically. That’s the music I like: stuff that’s off the beat. That’s what I want visually.

How has studying virology extended your notions of collage?
There’s this idea that our bodies are programmed to immediately reject any foreign bodies through this concept of the innate sensing mechanism. So if you had a transplant operation, you’d have to take immune suppression drugs to persuade your body to accept the organ. By swapping these metaphors from science into an art context, you can innovate what are very received principles of collage. In the series of paintings in the wall of the café space, for example, I’d been to Japan and acquired all this stuff: masks, weird toys, slightly offensive Japanese wigs. I had some stretchers, some fabric, and I began sticking these objects on and drawing around them with a silicone gun. The concentric circles were somehow like energy fields or the raking of gravel in a Zen garden.

If collage is about joining unlikely things together in the same place, then certain types of abstraction, line and pattern can lock those things together. That’s where virology has helped me to understand the collage better. It releases how I think about collage to go in a different direction than it would if I thought about in a traditional way. 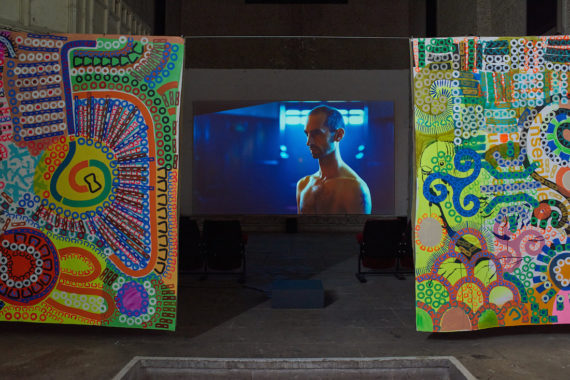 In the film, A Virus Walks into a Bar, Capsid seems to use his polite, middle-classness as a way to disguise the threat he poses. Nevertheless, I found myself almost feeling sorry for him. What was your thinking behind the personification of capsid in this way?
On the one hand, there’s a simple story that you can easily digest, and you do empathise with Capsid. He’s just naturally driven to behave like that. He is the emblem of corruption – he’s tricking his way into the pub through sophistry, through language, through his middle-class charm. It’s also telling a bigger story about how we’re all making compromises and building allegiances to get by in jobs, in relationships, in families. That’s really what Capsid’s about: coopting people strategically. He’s a Machiavellian.

On the other hand, because the narrative’s so simple, the more you watch it, the less it makes sense. People are dressed bizarrely: the speed, the pacing, the sound. The film goes into David Lynch [territory], who’s a big influence, and also Jules Olitski, whose paintings are just fields of colour. My film work is always an extension of the pictorials. I’m not a narrative filmmaker; I’m trying to make a moving painting.

Where do you come up with the cultural references? I’m thinking Duchamp and the Laughing Cow, for example.
Duchamp was almost the most mainstream one. More than the Laughing Cow somehow [laughs]. I think I gravitate to things that are really bad taste. That aren’t right, they’re just off and unfashionable, a bit uncool. A lot of the references are from the ’80s, and show my age, although Adventure Time’s young [an animated series from the 2010s]. I’m trying to acquire new things all the time. It’s a diary, in a way. It’s things I encounter over the course of the making process. That’s where the virus analogy comes in as well. There’s not much I can do as an artist apart from look at things, acquire them, draw them and reinvent them. It might look very complex, but I think all the processes are quite simple. For some reason, I’m driven to combine unlikely things. That’s just what I do.

‘CAPSID’ continues at CGP Gallery, London SE16 until 8 July 2018 and will move to Home, Manchester in November.

An iteration of Walter’s 2015 exhibition, ‘Alien Sex Club’, is at the Wellcome Collection, London until 27 August 2018.

‘Shonky: The Aesthetics of Awkwardness‘ is at Bury Art Museum and Sculpture Centre from 23 June – 15 September 2018 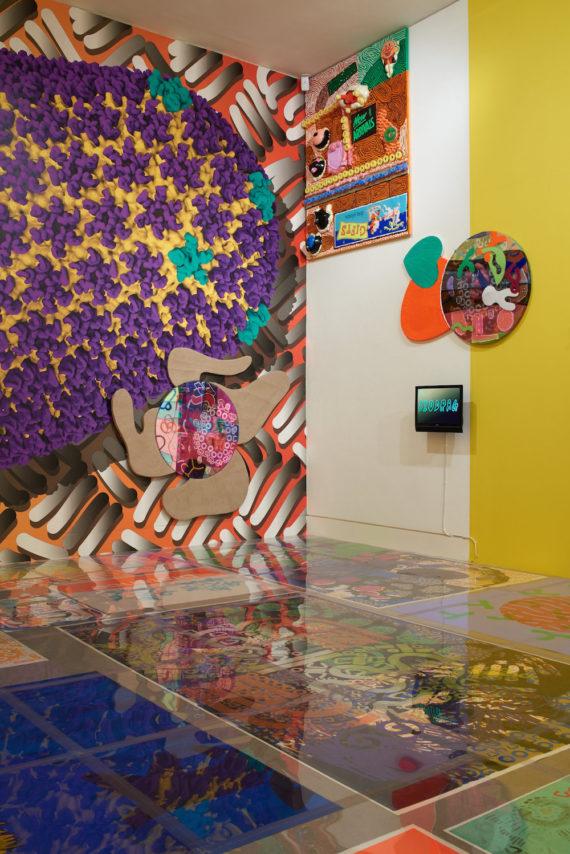