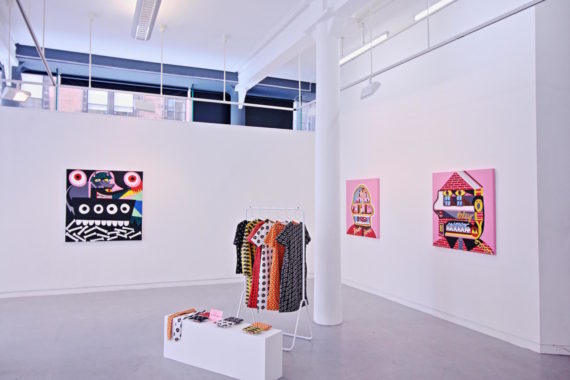 Rabiya Choudhry’s show ‘COCO!NUTS!’ is a collection of selected works from the last six years, 2012–2018; a particularly turbulent period of Choudry’s personal life.

Choudhry was born in Glasgow in 1982 to Scottish and Pakistani parents and trained at Edinburgh College of Art to MA level, graduating in 2006. She has recently produced work for Dundee Contemporary Arts’ exhibition DCA Thomson (2016) and was commissioned by Glasgow’s ‘Tramway Local’ programme to produce Govanhill-based public engagement project Sign Of The Times (2017).

This summer she was to show new textiles-based work as part of ambi at Glasgow School of Art’s Reid Gallery. However, due to the Mackintosh building fire this show has been postponed.

Choudhry’s current show at Glasgow’s Transmission also comes at a time of upheaval for the longstanding artist-run institution since it lost its Creative Scotland regularly funded organisation (RFO) status at the beginning of the year.

Choudhry describes her vibrant paintings as “joyous, demented expressions” of themes such as “shame, anxiety, guilt, fear, love and loss” – an all-consuming world she gets lost in.

Occasionally she has used painting to bring the world she would prefer to occupy into existence – a useful skill when there is so much hanging in the balance. 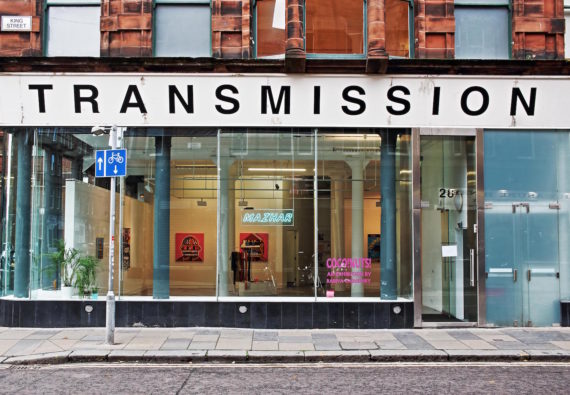 Your painting isn’t necessarily a place of comfort. It can be quite dark?
I think that’s because there’s stuff that I’m working through. Potentially down the line it might get more playful but I don’t have a plan, I’m just feeling my way through it. Having my own show, I was lost in the wilderness, lost in my own world – it wasn’t factoring into someone’s curated show, it was me flying solo.

Yes, when you have a solo show it’s up to you to define it.
That was something that happened really organically. A lot of it was a response to things that have happened over the years. My work can be quite autobiographical. There’s a homage to my dad as you come in, because I’d been working with textiles. Making fabric is something I’d always wanted to do but didn’t really have the resources to do it, and then I realised there was a relationship between the fashion shops my dad used to have and wanting to celebrate people of colour in neon – but that was a really loose idea. When I went for funding I said I wanted to put Asian names in lights. I love neon and I see a lot of neon and I think that in itself is a powerful thing.

You didn’t know your dad was going to end up in the work?
On the 25th January [2018] he went missing because he’d been hit [in his car] by another car. He was fine though, just a bit confused. One thing I realised that day was I don’t say ‘I love you’ enough to my dad. 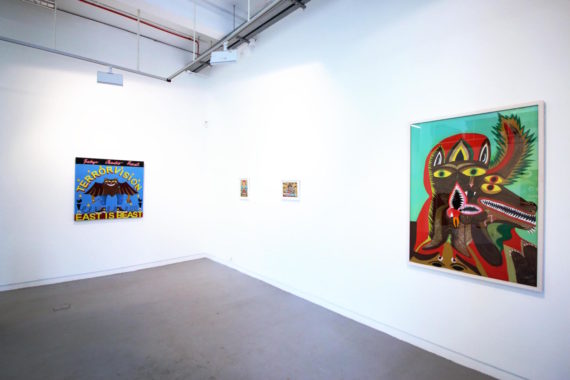 When I looked at the painting of the car crash I had no idea what was going on in your personal life. I just noticed that the date coincided with Creative Scotland’s funding announcement back in January.
Aye, the total drama of that day. It did feel like a bit of a disaster. I remember Transmission from when I was a kid – and the Franz Ferdinand song – but it’s a relatively new professional relationship I have with them. I was surprised they got in touch about doing a show; I thought it was the old-school committee. But then it made sense: it was the first time people of colour were running the show, asking someone whose work they knew and believed in, giving me a platform where I don’t feel I’ve had a proper one solely on my own.

You feel like there’s been a change of approach among the committee?
Definitely. I hope this rethink of its funding is going to help it go from strength-to-strength. This is a space that really needs to be supported and needs to stay where it is. I hope it doesn’t need to downsize in any way. I wanted it to look at its best ‘cause it’s an amazing gallery: let’s have it look amazing. It’s taken a long time [for me] to get to this point and then there are extra challenges. But now I’m like actually yeah, it’s a strong show and what they’re doing at Transmission is really exciting. 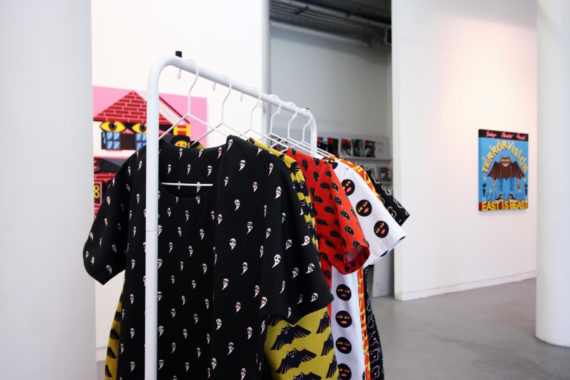 Can you tell me more about the printed fabrics you’re showing? It looks like they’re printed with repeating patterns that show stylised destructive forces – sinister little round gremlins and a fire motif are just two I noticed.
The black circles? They’re like bombs as well. What I’ve been trying to do with the clouds and the bombs is to represent anxiety – to try and take that feeling and make a very simple shape. I think that its quite empowering actually, to be able to take mental health issues and be open about them. The idea was to show the little painting patterns with the textiles but it worked better just to have the textiles flying solo. So the fire one, I painted that square in March but I could only print three fabrics and it didn’t fit in. But then after the School of Art fire I decided to print that as a pattern and make a dress out of it. There’s been so many different things I’ve been like, ‘OK, what do I do with that?’ I’m just rolling with it.

I’d like to know more about the time you printed money.
I was skint at the time and if you don’t have much money it’s a thing that goes through your head a lot. I started making spare change. On reflection I was like ‘why was I just drawing coins?’ I obviously wasn’t thinking bigger. For me – in a kind of hippy dippy sense – you can make things happen in your life. I left my part-time job that made me miserable and anxious and I’d whittled away my tiny little pile of savings. It was like starting from scratch again. I started writing about places I wanted to work, about how I wanted to have a solo show, about how I wanted to make this pay, and for my mental health I used to sit at the coffee table and paint money. I used to paint myself a thousand-pounds-a-day wage. I used to paint myself going-out money, I used to paint myself fivers and try and get drinks. I was writing myself cheques… and then it all just started to come together. You paint yourself back. It felt like I didn’t have much. It’s like having faith, and having faith for me is quite an abstract thing. 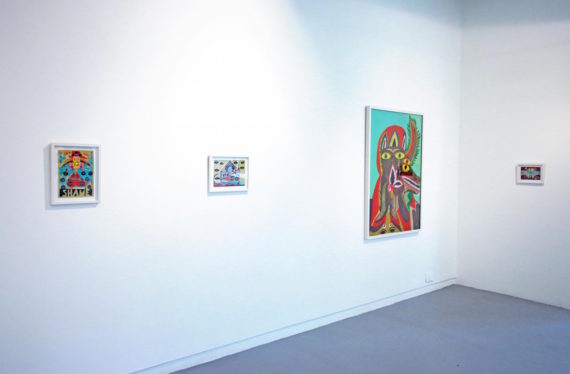 Where do the words in your paintings come from?
A lot of it’s from my naff music taste. I listen to songs and a particular line jumps out and goes in because it’s part of the journey of making paintings. I like to think there’s a higher power behind it all. Whether it’s the universe or whatever that sends you little things, and painting is like fishing for them and trying to catch them. When I was younger I didn’t really know what to do with pain; I just started having fun. You can take difficult things and have a bit of a laugh as well. I started to enjoy the process. I find it quite a lonely thing, so if the colours are bright and there’s a funny line coming in it just keeps me going a bit.

You’re painting things that keep you company?
I guess so, if you’ve got to stick with it for two months you’ve got to like it. It’s difficult if you don’t like something, and trying to paint through that.

What happens then, if you don’t like it?
You turn it round for ages. And you pull it back out when you’re a bit braver. That’s what I do, get a blanket and cover it. Don’t attack yourself. I’d be telling myself, ‘I’m crap at this, why am I doing this’, but now I go, ‘Look, there’s a little bit of tension here; I’m just gonna turn you round and come back to you because today’s not the day.’ I thought everyone did that.

Looking at the show you’ve put together is there a message you’d send back to yourself six years ago?
It was only two years ago I was crying, saying ‘I just want to make ice cream’ and my partner was saying ‘You’re NOT’ and I was saying ‘you’re making me do this, you’re forcing me to do this’. I became a bit of a shit in that sense. I was just being stroppy. Don’t doubt yourself, it’s OK to take your time and try and work with the right people. Trust your instincts. I feel like I’m a bit more on track now but it’s like, ‘If less is more then OK, I’d rather do it that way’ – rather than getting asked to do loads of solo shows where I’m not sure how I fit, just ticking that box of identity in Scotland. 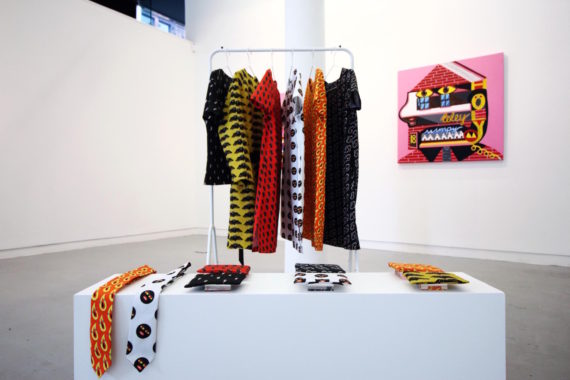 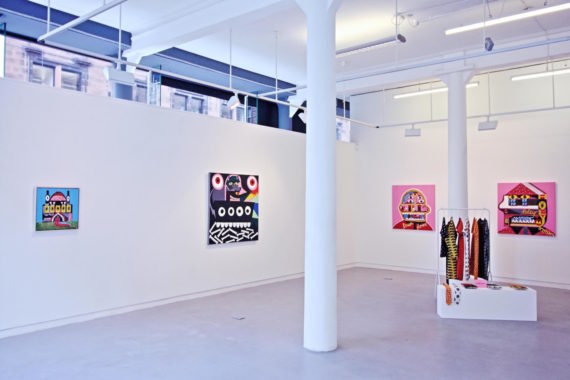 Jessica Ramm is one of eight a-n members who were selected for the a-n Writer Development Programme 2017-18. For more information on the writer programme, and to read more of the latest cohort’s work, visit the 2017-18 programme’s blog on a-n.co.uk or use the a-n writer development programme 2017-18 tag