Venice Biennale 2019: From Iceland to Singapore, our pick of the national pavilions - a-n The Artists Information Company 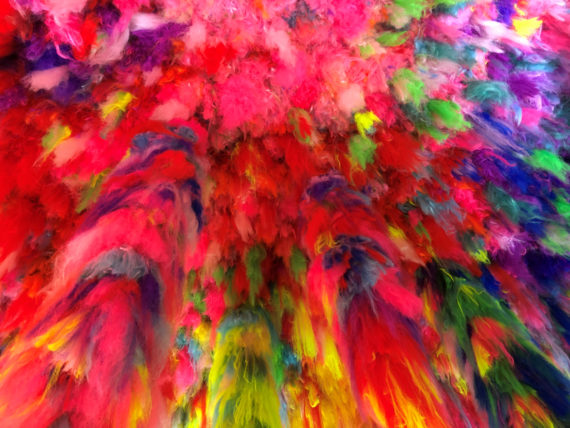 In addition to the Ralph Rugoff-curated International Art Exhibition at the 58th Venice Biennale, the city-wide biennale also features 90 national pavilions and 21 ‘collateral’ events, the latter including the pavilions from Scotland and Wales.

These are spread across the main sites at the Giardini and Arsenale, plus various other locations in Venice.

A number of nations are participating for the first time this year, including Algeria, Ghana, Madagascar, Malaysia and Pakistan.

Here we highlight 10 pavilions that made a big impact during a-n’s visit to the biennale, including Cathy Wilkes’ show for Great Britain, Sean Edwards’ installation for Wales, and an intriguing mix of synthetic hair and heavy metal at the Iceland pavilion.

Iceland
One of the most striking installations of the biennale can be found at the Iceland Pavilion, with Hrafnhildur Arnardóttir, better known as Shoplifter, presenting an immersive space made entirely from synthetic hair. Located on the Giudecca, a small island south of the main tourist area in Venice, it is a welcome relief from the hustle and bustle of the biennale.

You enter the space through a narrow, dark cave, which then gives way to a sea of multicoloured hair that covers the walls, ceiling and floor. It’s almost like being trapped in the hair of a ginormous furry animal – imagine Sulley from the Disney film Monsters Inc. and you’ll get the idea.

Arnardóttir originally used real human hair to produce her sculptures, but expanding things to this scale clearly made that medium impractical. Completing the environment is a pulsating soundtrack by the Icelandic metal band HAM, which adds to the sense that the space is alive. The work has a sense of humour and lightness that isn’t indicative of the other work across the biennale, but as an isolated piece its sense of presence is undeniable. 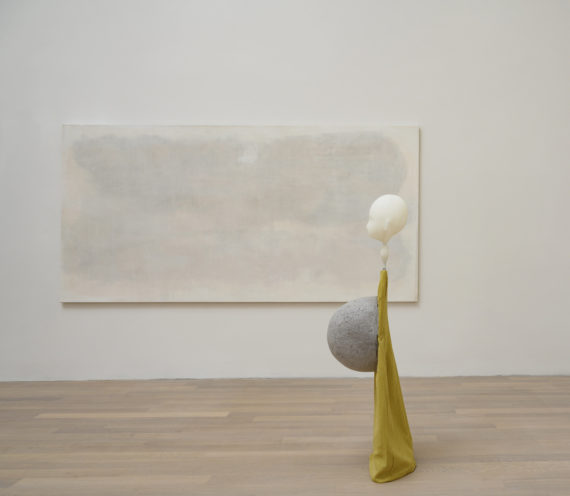 Great Britain
Glasgow-based, Belfast-born artist Cathy Wilkes‘ exhibition at the biennale was curated by Tate’s curator of international art, Dr Zoe Whitley. Located in the Giardini at the end of the main pathway of the site, it’s clearly a popular draw with large queues of people lining up to enter the space.

Consisting of a series of floor-bound sculptural installations as well as paintings and prints, this meditative, quietly powerful exhibition references the human body while exploring the universal themes of love, life and death and in particular how we continue to coexist with those who are no longer living. Despite the scale of the installation, which ranges across the pavilion’s rooms, there is an undoubted subtlety and intimacy to the show, with numerous small objects placed in various nooks and crannies throughout the spaces.

There is a sense of exploration as you come across everything from a toilet roll and small pebble, to a tiny flower pot and insects. In a biennale packed with loud voices dealing with pressing contemporary issues, Wilkes’ offers something more introspective and personal. In so doing, it’s possible that her work strikes hardest. 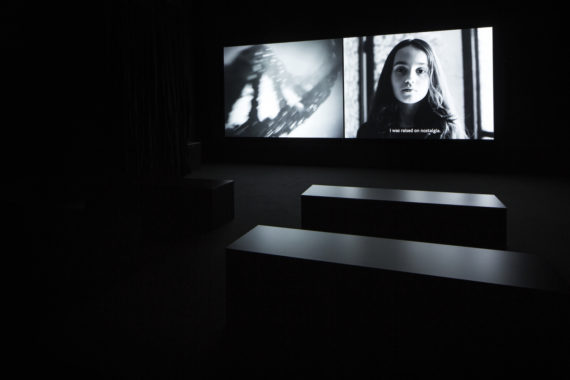 Split across two spaces which are separated by a walkway through to the Giardini café, the pavilion presents two very different pieces of work. First up is a two-channel science-fiction film, In Vitro, which is staged in the town of Bethlehem decades after an eco disaster. Shot in monochrome, the work features footage of black liquid spilling across the city scape, bringing to mind the famous elevator blood scene from The Shining.

The film also features a huge black sphere, a physical version of which is located in the pavilion’s other space. Entitled Monument for Lost Time, the work has an accompanying soundtrack featuring unnerving groans and effects. Sansour paints a dark picture of what the future might hold for the human race – a theme repeated across other national pavilions.

Ghana
Ghana’s debut at the Venice Biennale is marked with a pavilion designed by architect David Adjaye. Located in the Arsenale, the pavilions here have a very different feel to the Giardini’s permanent buildings, with multiple exhibitions sharing the same warehouse space. Ghana’s presentation is sandwiched in-between pavilions from Malta and the Republic of Slovenia.

The presentation features six artists in a relatively small area and is titled ‘Ghana Freedom’, after the song composed by E.T. Mensah on the eve of the country’s independence in 1957. The exhibition sets out to examine the legacies of that freedom.

Perhaps the biggest draw is new work by the filmmaker and Artes Mundi 7 winner John Akomfrah. His three-screen film, Four Nocturnes, features footage relating to the destruction of nature, with multiple shots of animals being killed, both historic and contemporary. While the imagery is powerful, at times it also brings to mind a Sunday evening nature programme narrated by David Attenborough.

Elsewhere, there is a large-scale installations by El Anatsui and Ibrahim Mahama, work by the photographer Felicia Abban, a video sculpture by Selasi Awusi Sosu, plus painting by Lynette Yiadom-Boakye. Read our 2016 Q&A with John Akomfrah here 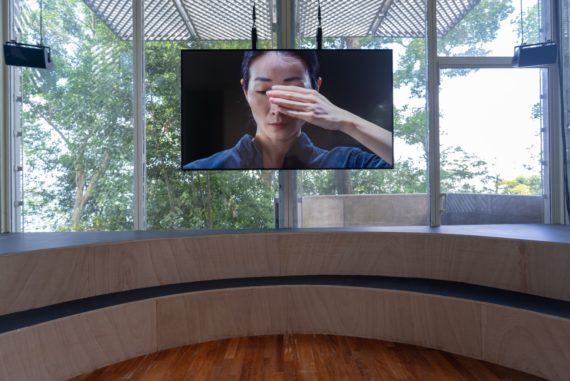 Republic of Korea
Entitled ‘History Has Failed Us, But No Matter’, the Republic of Korea’s presentation is a group show featuring work by three women artists: Siren Eun Young Jung, Jane Jin Kaisen and Hwayeon Nam. Various video work is displayed in unusual ways, including behind curtains and facing upwards, embedded in wooden seating.

Hwayeon Nam presents the multi-channel work Dancer from the Peninsula, which focuses on the history of dancer Choi Seung-hee, who died in 1969. It explores the period after 1941 when she defected to North Korea, and how her art mirrored the trajectory of her own life and that of the mid 20th century, resulting in a legacy that remains a basis for the creation of East Asian dance.

Siren Eun Young Jung’s audio-visual installation, A Performing by Flash, Afterimage, Velocity, and Noise, questions political aesthetics through a ‘feminist-queer methodology of re-summoning the narrative of those isolated by official history’. Finally, Jane Jin Kaisen’s two-channel video installation, Community of Parting, draws on the artist’s reseach into Korean shamanism and a long-term engagement with communities affected by war and division.

All three artists present an intriguing approach to interpreting history and how the lessons of the past can inform the future. 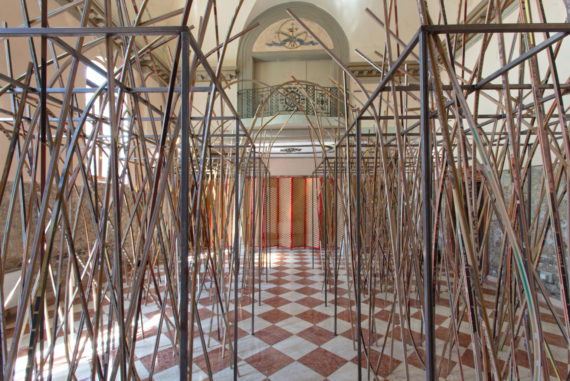 Wales
Known for a practice that spans sculpture, film, video, photography, books and performance, Cardiff artist Sean Edwards presents a fantastically-staged show in the Santa Maria Ausiliatrice, a former convent that is now an active school and community centre.

Edwards has chosen to leave the church, corridors and classrooms largely untouched, with signs of everyday use incorporated into the show.

There is a variety of work, including a four-part steel framework in the main chapel which contains hundreds of twinned sculptures, their sides treated with spray paint and pencil, while their faces are directly printed with slices of personal photographs. Sourced from numerous places, including family photographs, Edwards is inviting the viewer to piece together the story, reassembling time and memory.

Also featured is a radio broadcast produced in partnership with National Theatre Wales. Floor speakers are activated once a day at 2pm by a broadcast of the artist’s mother reading a script live from her home in Cardiff. Speaking with a Northern Irish accent, she shares numerous stories, including her experience of growing up in a Nazareth orphanage, a period of homelessness after leaving care, and cleaning other houses for a living.

It is an intriguing work that speaks of the search for home, with the sounds shifting the atmosphere and context of the whole exhibition. The results are incredibly moving. Read our Venice Biennale 2019 Q&A with Sean Edwards here 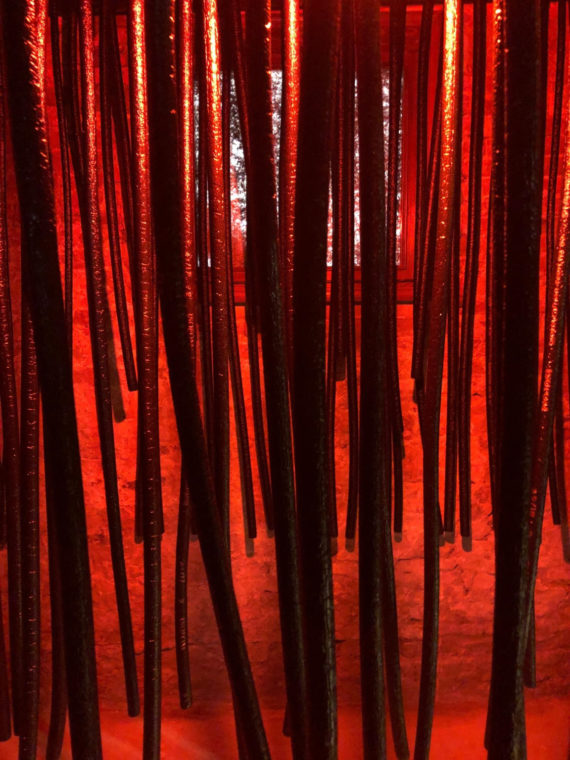 Mongolia
One of the more unusual pavilions at Venice is accessed via a tiny alleyway round the corner from the Wales presentation and close to the Arsenale entrance. Mongolia’s pavilion is located in an old Venetian house and features the sculptural installations and sound work of LA-based artist Jantsankhorol Erdenebayar, who has collaborated with Carsten Nicolai, aka Alva Noto, a German artist and electronic musician.

Taking inspiration from the centuries-old practice of Mongolian throat singing, ‘A Temporality’ features audio in addition to sculptural work spread across numerous rooms. These include a large black sculpture reminiscent of a fallen meteorite, and a room full of black tubes suspended from the ceiling.

Having such large pieces crammed into tiny rooms could create a claustrophobic feeling, but the audio track of throat singers adds a panoramic scale to the work that takes the experience some place else. The show creates a dialogue between the past and present, with Erdenebayar inviting viewers to reminisce.

In addition, the exhibition will feature sporadic live performances of throat singing throughout its run. 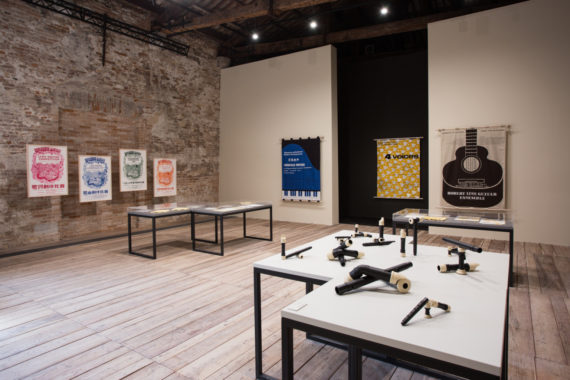 Singapore
A recurring theme throughout the biennale is the use of music, either at the forefront of the work on show or underpinning it through background noise and effects. The Singapore pavilion makes this explicit, with Song-Ming Ang’s practice exploring the various ways in which people relate to music, both on a personal and societal level.

Titled ‘Music for Everyone: Variations on a Theme’, Ang’s presentation takes inspiration from Music For Everyone, a series of concerts organised by Singapore’s then-Ministry of Culture in the 1970s and ’80s to encourage public appreciation of the arts.

His installation, which is located in the upper levels of the Arsenale, features chopped up recorders, a suspended grey board with framed music sheets, and a mix of other musical artefacts. There are also display cabinets containing sheet music, cut up and reimagined as a form of sculpture. A number have holes in them, bringing to mind what notes would be produced if a musician followed the gaps.

Ang says that “music functions as an entry point into other areas, like how fans and amateurs embody the spirit of dedication, and the unexpected ways in which they generate knowledge”. The work on show here certainly suggests a wider dialogue that reflects on society itself and the broken nature of democracy. 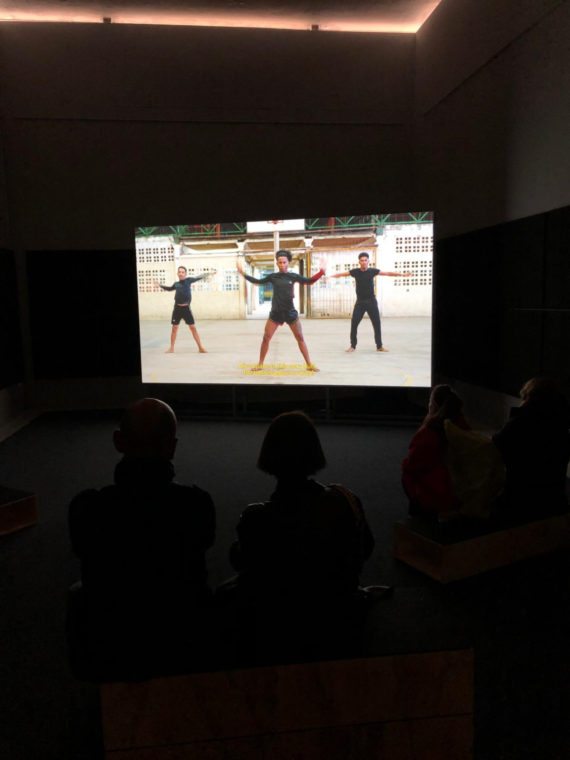 Brazil
Another pavilion with a strong emphasis on music is Brazil, which features Swinguerra, a new film by artist duo Wagner and de Burca, specially commissioned for the biennale. It takes its title from the popular dance movement in the north east of Brazil known as swingueira, but the slight spelling twist makes the word end in ‘guerra’, meaning war.

Presented on two large screens positioned at either ends of the space and showing the film simultaneously, the film is a bombardment of visual and audio expression. Wagner and de Burca worked collaboratively with the performers, their research taking them to what might be described as marginalised communities. The film focuses on three distinct dance styles from the periphery of the coastal city Recife, including the aforementioned swingueira, plus brega funk and passinho da maloca.

It’s a fascinating take on Brazilian culture, highlighting that even in moments of political and social tension, the arts can still allow complex explorations of issues such gender, race and masculinity. 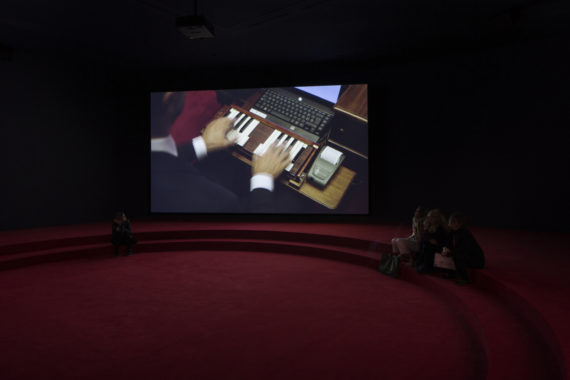 Australia
The Australian pavilion features a three-channel video installation, housed in a large circular space in between the France, Uruguay and Czech Republic pavilions in the Giardini. Angelica Mesiti’s work, Assembly, features various performers that explore the ‘transformative power of ensemble communication through interpretation and non-verbal languages’.

Again, music is central to the piece, with Mesiti utilising a stenographic Michela machine to re-code a poem by the Australian writer David Malouf. This was then transposed into music by the composer Max Lyandvert, and played by a variety of performers.

The transformation of text to code, to music, to performance, offers an interesting allegory for the way that human society and the world in general is constructed and evolves. Whereas in other work on show at the biennale the future is portrayed in a negative light, Mesiti is more positive, reinforcing the need for different views and desires to work together.